Sri Lanka will be without Angelo Mathews for their three-match ODI series in New Zealand which gets underway in Tauranga on Thursday, live on Sky Sports Cricket.

Mathews tore his hamstring during Sri Lanka’s defeat to the Black Caps in last week’s second Test and now faces around four weeks on the sidelines.

Sri Lanka will be hoping that batsman Kusal Mendis can carry over his form from the Test format, with the right-hander having scored an unbeaten 141 in the first game in Wellington as the tourists battled to a draw and then 67 in the second which New Zealand won by 432 runs.

New Zealand will also be missing some important players, with Tom Latham – who carried his bat for a record 264 in the first Test at Basin Reserve – and Colin de Grandhomme rested.

Tim Seifert will keep wicket in Latham’s absence – the 24-year-old is yet to make his ODI debut but has played seven Twenty20 internationals.

All-rounder James Neesham and seamer Doug Bracewell have also been recalled by New Zealand, while Ish Sodhi is the only frontline spin option with Mitchell Santner continuing his return from a serious knee injury in domestic cricket for the time being. 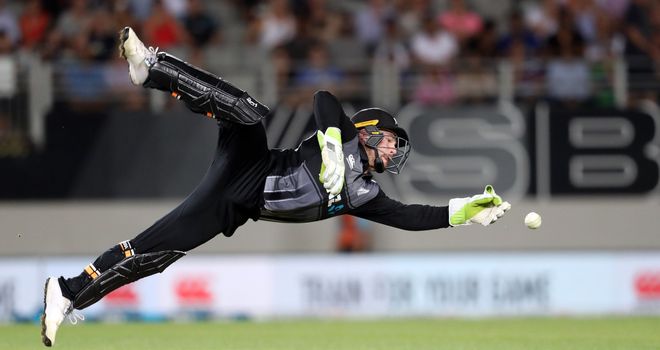 Tim Seifert is poised to make his ODI debut in Tauranga

New Zealand have won only one of their four ODIs in Tauranga – a 36-run victory over Sri Lanka in 2015/16 during a series they went on to take 3-1.

The Black Caps were beaten by England in their last ODI at the ground in February 2018, with Eoin Morgan and Ben Stokes striking fifties as the tourists triumphed by six wickets.

Sri Lanka, who will be captained by Lasith Malinga, have lost 33 of their last 44 completed ODIs and learnt on New Year’s Day that they will have to qualify for the group stage of the next T20 World Cup in 2020.

Watch the first ODI between New Zealand and Sri Lanka, from Bay Oval in Tauranga, from 12.55am on Thursday on Sky Sports Cricket (channel 404)