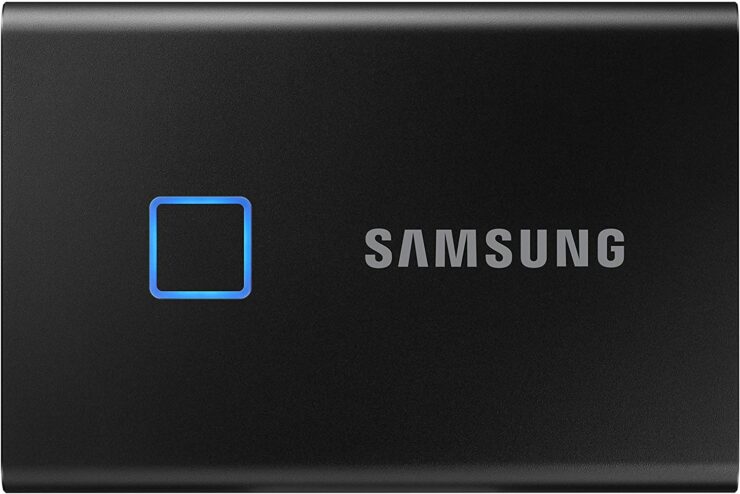 When you hear the terms ‘Samsung’ and ‘portable SSD’, you already know we’re talking about a high-quality product and the T7 Touch is not just fast, it’s more affordable and durable. The base model features a capacity of 500GB and is available from $119.99 on Amazon right now. There are multiple capacities that you can purchase according to your needs.

When it comes to speeds, the T7 Touch offers plentiful for a portable SSD. Read speeds of 1050MB/s and write speeds of 1000MB/s makes the solid state drive around twice as fast as its predecessor, the T5, and up to 9.5 times faster than external hard drives. When it’s used with the NVMe interface, users will be able to experience the fastest read and write combination from the T7 Touch. Perhaps one unique feature for a portable SSD is the built-in fingerprint reader, and the drive also supports password protection with AES 256-bit hardware encryption.

Apart from being highly portable and fast, the Samsung T7 Touch is also light, weighing in at just 58 grams. The aluminum shell helps protect the solid state drive from irreparable damage while also giving it that sleek look. Accessories include a USB Type-C-to-C cable and a USB Type-C-to-A cable, and for added convenience, the drive is compatible with Windows, Mac, and Android operating systems.

So how about it? A fingerprint-operated portable SSD that starts from only $119.99? Sounds like a fabulous deal to us.

Get the Samsung T7 Touch from Amazon

The post Samsung T7 Touch Portable SSD Comes With 1050MB/s Read Speeds, a Fingerprint Scanner and Is up to $50 Cheaper Right Now by Omar Sohail appeared first on Wccftech.