Last month Epic Games gave us an early taste of what we can expect from the next generation of gaming with “Lumen in the Land of Nanite,” a stunning real-time Unreal Engine 5 demo running on PlayStation 5 hardware. We’ve heard a lot of intriguing soundbites about the tech powering UE5 since then, but Epic has just dropped a more detailed deep-dive dissection of the new engine and demo as part of their Unreal Fest Online 2020 virtual event. If you have around 45 minutes to spare, you can check out the full video for yourself, below.

Nanite is a next-generation geometry engine that empowers artists to deliver their vision in a way not possible before in a game engine. Nanite allows direct import of cinematic-quality assets that have micro-polygon-level detail […] you can now target assets that have one triangle per pixel. In addition, Nanite supports very large object counts with automatic streaming to keep everything in budget.

The “Lumen in the Land of Nanite” demo ran at approximately 1440p and 30fps, but apparently, the PS5 could easily render most of it at 60fps. As we already learned, Nanite is not particularly taxing on hardware – the entire GPU rendering cost of the demo was about 4.5ms, which is about 1/4  the timeframe budget at 30fps or 1/8 at 60fps. The demo also only used a rather paltry 768MB of RAM. Despite this, the demo is pushing massive numbers of polygons – a single one of the statues seen in the demo contains 33m polygons, with most of what looks like traditional textures being actual 3D geometry made up of tiny pixel-sized polygons. The statues alone in the scene below contain 16 billion polygons. 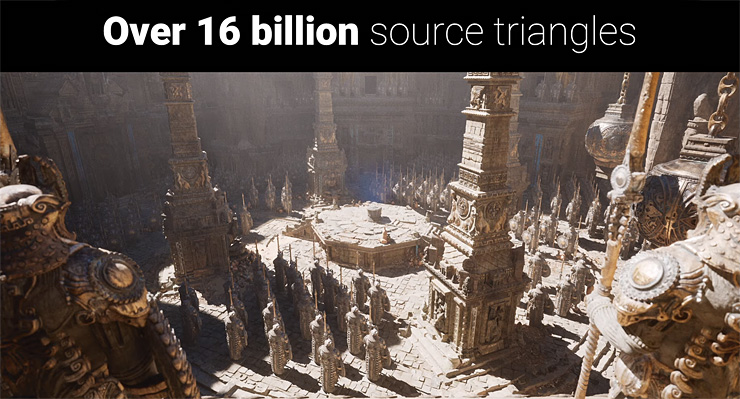 And what about that final showcase moment when the girl soars through the valley? Around 500,000 super high-polygon objects are seen during that scene, and Epic says they could quite easily render up to a million objects on screen with next-gen hardware.

Impressive stuff, although there are some limitations to Nanite at the moment. Epic admits the tech isn’t good at rendering translucent or non-rigid materials like grass and hair yet (there’s a reason the demo is set in a rocky desert). That said, developers can freely combine Nanite with older Unreal Engine tech.

Epic also provided some more detail about their new lighting solution, Lumen. The new tech supports detailed real-time lighting, although it currently doesn’t work with mirrored or reflective objects (in other words, it won’t be replacing ray tracing just yet). It seems Lumen is also more of a resource hog than Nanite – Lumen is the reason the UE5 demo only ran at 30fps, although Epic is hoping they’ll be able to get it working at 60fps on next-gen platforms.

What do you think? Impressed by Unreal Engine 5? What kind of games are you hoping to see made with the new tech?