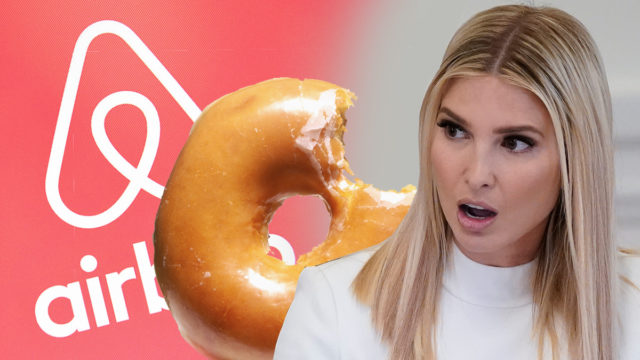 Ivanka Trump has led the pack of three big whoops-a-daisy moments this week, showing the rest of the world on how not to operate during a global pandemic.

The 38-year-old businesswoman (and daughter of US President Donald Trump) has been lambasted for her part in the White House’s new campaign, “Find Something New”.

She’s not alone – gig economy giant Airbnb has felt the wrath of its customers, and Krispy Kreme has found itself in trouble with the police.

While we shake our heads at how out of touch big names can be, author and crisis communications adviser Nicole Matejic says it’s not an easy landscape to navigate.

Marketing in the midst of a pandemic, when nothing is untouched and everything is unknown, requires a special kind of nuance and sensitivity.

It requires thinking several steps ahead, in tandem with keeping a close gauge on public sentiment.

Basically, all the things this trio did not do.

Ms Trump’s trampling of the line between good and bad marketing does not come as a surprise, Ms Matejic told The New Daily.

Ms Trump was the face of what is essentially a campaign that tells out-of-work Americans to simply find a new skill set or a new opening.

(Yes, just as Ms Trump did when she jumped from being the executive vice president of the family-owned Trump Organisation to becoming a senior adviser to the President.)

In a video pitch more akin to an home infomercial, she spruiks the easy way Americans can get back into a new career pathway, without having to do “two- or four-year college degrees”.

“It’s a very entitled view to have,” Ms Matejic said.

“It’s very out of touch with people and that’s been a hallmark of (Donald Trump’s) presidency, to be honest.”

“You don’t have to be a rocket scientist to understand there are no jobs (in the US) … upskilling or training or developing a magic superpower isn’t going to change that.

#FindSomethingNew is the new #LetThemEatCake

“I’ve got friends in the US who have lost their jobs (as a result of the pandemic) and there’s 3000 people going for the one job.”

Ms Matejic said it was typical of the Trump political design to trot out Ivanka as a pretty face to a policy; a way to keep the base camp happy.

But, she warned, the tide was turning – Americans are beginning to get fed up with the same old tactics from the Trump government.

Sometimes, there’s good will that’s simply misdirected – or, in the case of Krispy Kreme, just a serious case of not thinking ahead.

Krispy Kreme invited these eight million-plus Aussies by giving away a free doughnut on one day only – July 13 – by popping into their local store.

“That’s a PR stunt that has not been thought out very well,” Ms Matejic said.

Why wasn’t it thought out well? Because it resulted in thousands of people swarming Krispy Kreme stores, in the middle of a pandemic, to the degree that police had to be called to patrol and even shut down stores.

“It shows that they value their PR more than their customers,” Ms Matejic said.

Airbnb also stirred up bad taste, when it was revealed it has been tapping people on the shoulder, suggesting they send a ‘kindness card’ and maybe a small financial donation, to their past hosts.

The idea was the company reached out to guests who’d given previous hosts four or five-star ratings in the past, to invite them to send personalised ‘thank you’ cards to lift their spirits in a time when no one is booking luxe weekend getaways to mountain huts with outdoor baths.

Guests are then given the option of sending a financial gift, too.

“Again, so out of touch with the base population.”

They’re pretty serious gaffes, but just as their name gets their mistakes in headlines, it’s their name that will also save them, PR commentator Trevor Young told TND.

“These examples go to show how important it is to build a strong and trusted brand in the first place, so if you are off-kilter in reading the mood of the people at any point, then you’ll probably bounce back quickly enough,” said Mr Young, of Digital Citizen Group.

“Brands that aren’t liked or trusted in the first place, however, will struggle a lot more in winning people back, depending of course on the severity of the stuff-up.

“I’m sure both Airbnb and Krispy Kreme will get through this OK, a bit bruised yes, but all the better for the experience.”

The post Ivanka Trump gets doughnuts in a series of serious PR missteps appeared first on The New Daily.