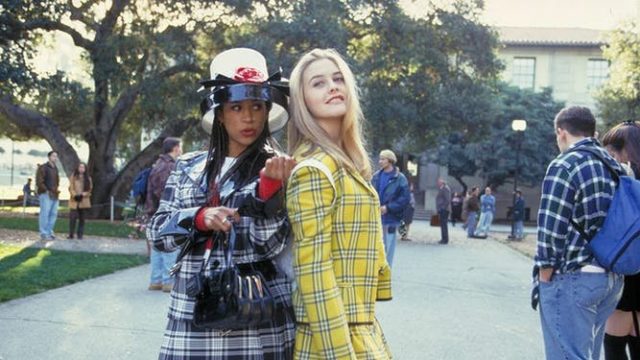 Many teen films fade away never to be heard of again, but Clueless, a loose adaptation of Jane Austen’s Emma, has remained in the cultural consciousness since its 1995 release.

Maybe it’s the catchy soundtrack, or familiar story about social comeuppance, or the endurance of the teen film as a genre. Most likely it’s a combination of many factors.

Austen’s Emma Woodhouse is transformed into Cher Horowitz (played by then relatively unknown Alicia Silverstone), a Beverly Hills teenager, who – like her matchmaker predecessor – considers herself the centre of her social circle.

As in Emma, our clueless protagonist meddles in her friends’ lives, attempting to transform Tai (a modern-day facsimile of orphaned and penniless Harriet Smith, played by Brittany Murphy) into a worldly and fashionable “catch” for the suitor of Cher’s choosing – the dashingly handsome Elton (in a rework of the original Mr Elton, played by Jeremy Sisto).

Austen’s books have an enduring appeal for filmmakers, with varying levels of fidelity to their source material.

Clueless has engendered a cult following since its release, leading to a number of spinoffs including books, comics, a television series (1996-1999) and even a 2018 jukebox musical written by the film’s writer-director Amy Heckerling.

Clueless was a labour of love for Heckerling.

She worked on the script for years, as producers came and left and studios signed on and then abandoned the project.

By the 1990s, Heckerling was an established director who had critical and commercial success with Fast Times at Ridgemont High (1982), National Lampoon’s European Vacation (1985) and Look Who’s Talking (1989).

One of only a few female directors working for major studios at the time, she had established herself as as strong voice in the teen film realm.

As journalist Taffy Brodesser-Akner has written: “She was a woman who was somehow able to join a fraternity and thrive in it.”

Clueless is a film out of time in many ways.

Fashion, language, music and story are all taken from other eras and remixed to create a unique aesthetic.

In a nod to its literary roots, Clueless plays with language in interesting and memorable ways.

The endlessly quotable movie had its teenage characters communicate with exaggerated effect.

“In conclusion, may I remind you, that it does not say ‘RSVP’ on the Statue of Liberty.” Channeling Cher Horowitz: https://t.co/6QLn6TI1W9 pic.twitter.com/ZAntVxFd1w

At times, Cher seems to have her own language that requires translation.

A “full-on Monet” refers to someone who “from far away, it’s OK, but from up close, it’s a mess”.

A “Baldwin” is a cute guy, in reference to the famous and famously handsome Baldwin brothers.

Not long after we are introduced to Tai, she says to Cher, “You guys talk like grown ups”.

Cher replies, “Oh this is a really good school.”

One of the self-improvement tasks that Cher assigns Tai is to learn a new word every day. Her first word is “sporadically”.

The costumes are also aspirational.

Clueless did not reflect the fashion of its time but reshaped it.

While we may think of Cher’s yellow plaid ensemble, organza shirt, white Calvin Klein mini and red Alaïa (“like a totally important designer”) dress as iconic 1990s fashion, in the early ’90s high school students were wearing grungy flannel and loose-fitting jeans, which did not fit Heckerling’s ideal aesthetic.

Willow Smith paid homage to Cher in Cosmopolitan, Iggy Azalea casts herself as Cher in the music video for Fancy, and Ariana Grande channelled her inner Cher for her 2019 world tour.

With its mansions, designer dresses and fancy cars, Cher’s world is a fantasy for most viewers.

Heckerling said: “I wanted that feel of a fantasy that you would like to live in.”

Similarly, Austen’s Emma has been criticised for ignoring the political and economic realities of 1815, including widespread poverty and war.

At the same time, economic survival is at the centre of Austen’s Emma: Harriet must marry or risk becoming a spinster like Miss Bates; Frank Churchill and Jane Fairfax keep their engagement secret to avoid familial financial fallout; and Mr Elton improves his station by marrying the garish Miss Augusta Hawkins, just as Elton winds up with the irritating Amber (played by Elisa Donovan) in Clueless.

Clueless‘s soundtrack forms a key part of its success and popularity, but it also adds to the film’s sardonic humour, irony and character development.

An eclectic mix of 1990s American pop punk, hip-hop and rock, along with covers of hits from the 1970s and 1980s, the music establishes the milieu and expresses characters’ internal emotions.

The film’s opening titles feature Californian punk rock band The Muffs’ cover of Kids in America over a montage of Cher and her friends driving through Beverly Hills in her jeep, shopping on Rodeo Drive, lounging by the pool, and talking and eating at the mall; all images of her extreme wealth, privilege and carefree teen life.

This is ironically undercut by Cher’s narration: “I actually have a way normal life for a teenage girl.”

David Bowie’s 1980 hit Fashion plays while she picks out an outfit on her computer and selects it from her motorised revolving wardrobe. The songs add to the ironic nature of the film’s commentary on Cher’s obliviousness to her own wealth and privilege.

Cher’s carefree feminised lifestyle is also mirrored in the lyrics of 1990s pop hits sung by women (I’m Just a Girl, Shoop, Supermodel), just as these pop hits are a reflection of her.

Meanwhile her dopey love interest and ex-step-brother Josh (Paul Rudd) listens to – in Cher’s words – “the maudlin music of the university station” when he comes home from college.

The pleasure in watching their eventual romantic union comes from their compromise for each other, or their ability to break the strict social hierarchies of high school and come together.

Of course, this trope far predates the teen film: It’s as much Shakespeare as it is Jane Austen.

In Clueless, musical taste forms a key part of distinguishing not just Cher from Josh, but the whole cast of girls from the boys.

When the gang go to a party, they listen to Coolio’s Rollin’ with My Homies; Elton sings along to The Cranberries’ Away while driving Cher home; Tai and Cher watch Travis (Breckin Meyer) perform at a skating competition to The Beastie Boys’ Mullet Head.

Two songs bring the whole gang together: Where’d You Go? and Someday I Suppose, performed by ska punk band the Mighty Mighty Bosstones during a college party.

Cher and Josh’s relationship begins to soften at this point, as everyone gets into the dancing – girls and boys together, at last.

The soundtrack also adds an ironic note to Cher’s eventual pivot towards Josh.

To the sounds of 1990s pop singer Jewel singing a cover of All By Myself, Cher walks around Rodeo Drive feeling sorry for herself. When she realises she is in love with Josh, a fountain comically erupts behind her.