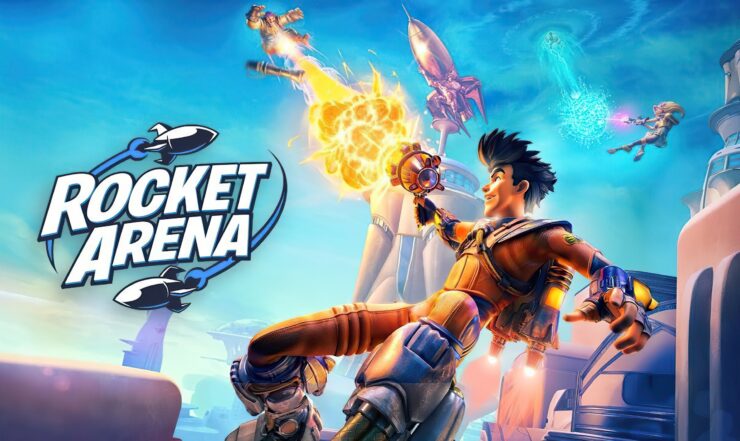 Rocket jumping was a skill I never quite figured out when Quake II was one of the biggest titles on MPlayer. By the time Team Fortress 2 hit its peak (somewhere before the addition of hats and alternate weapons), I started picking up some of the timings and skills necessary to get that advantage as a Soldier. Who knew that those skills I slowly built up would prove useful in other games, especially one where rockets are the only form of weaponry around. This is Rocket Arena, an EA Original developed by First Strike Games that aims to be a kid-friendly competitive shooter where no one has to die. 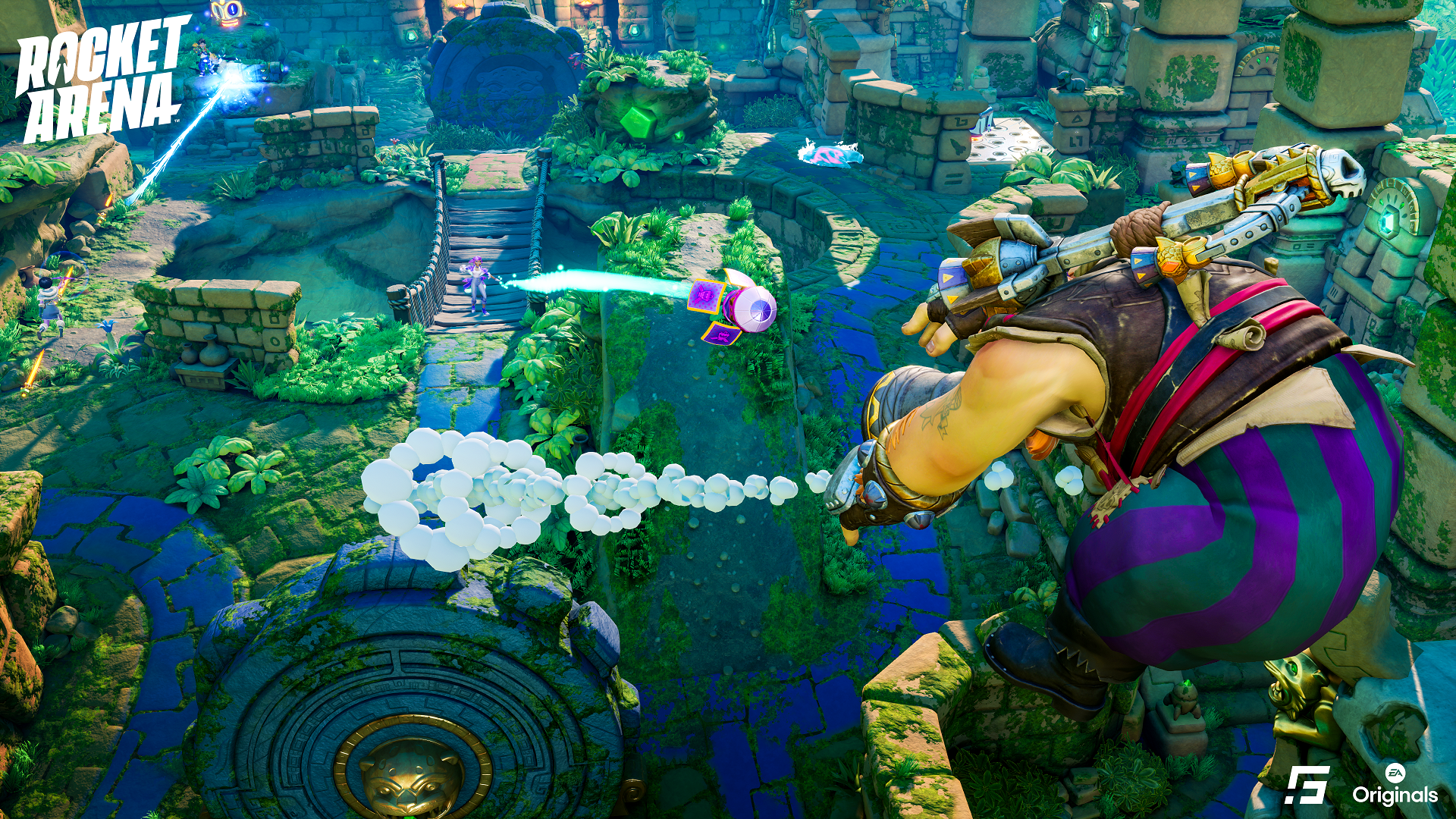 Rocket Arena currently ships with ten different competitors with enough room to add in plenty more as the game receives new content patches. Each of Rocket Arena’s heroes and heroines feels significantly different from one another to play, which is quite impressive considering that the game’s sole form of weaponry comes in the form of rockets and explosive ordinance. As is common with most hero shooters, you’re only allowed one single instance of a champion per three-player squad, so you can’t just stack up three Blastbeards and obliterate the enemy team with cannon fire.

No matter which Rocket Arena competitor you pick, they all have similar foundations to work with. Their primary weapon is, of course, rocket-based but each behaves differently, Some champions have single shot weapons that simply need to be charged up before each use while others might have more traditional clip-based weapons. The secondary ability for each competitor is a lot more diverse with abilities ranging from bouncing mines to damage absorbing shields. The special abilities available to each competitor in Rocket Arena is where they truly stand out. These are the abilities that typically run on a significantly lengthy cooldown but offer hugely differing abilities for both mobility and field control. If I had to pick any one character’s ability that stands out among the rest, it would have to be Amphora. Her special ability lets her dive underground and swim towards an enemy (Splatoon, anyone?) then leap out of the air with a large water spout that can cause some pretty heavy damage and even knock out competitors that were previously damaged. 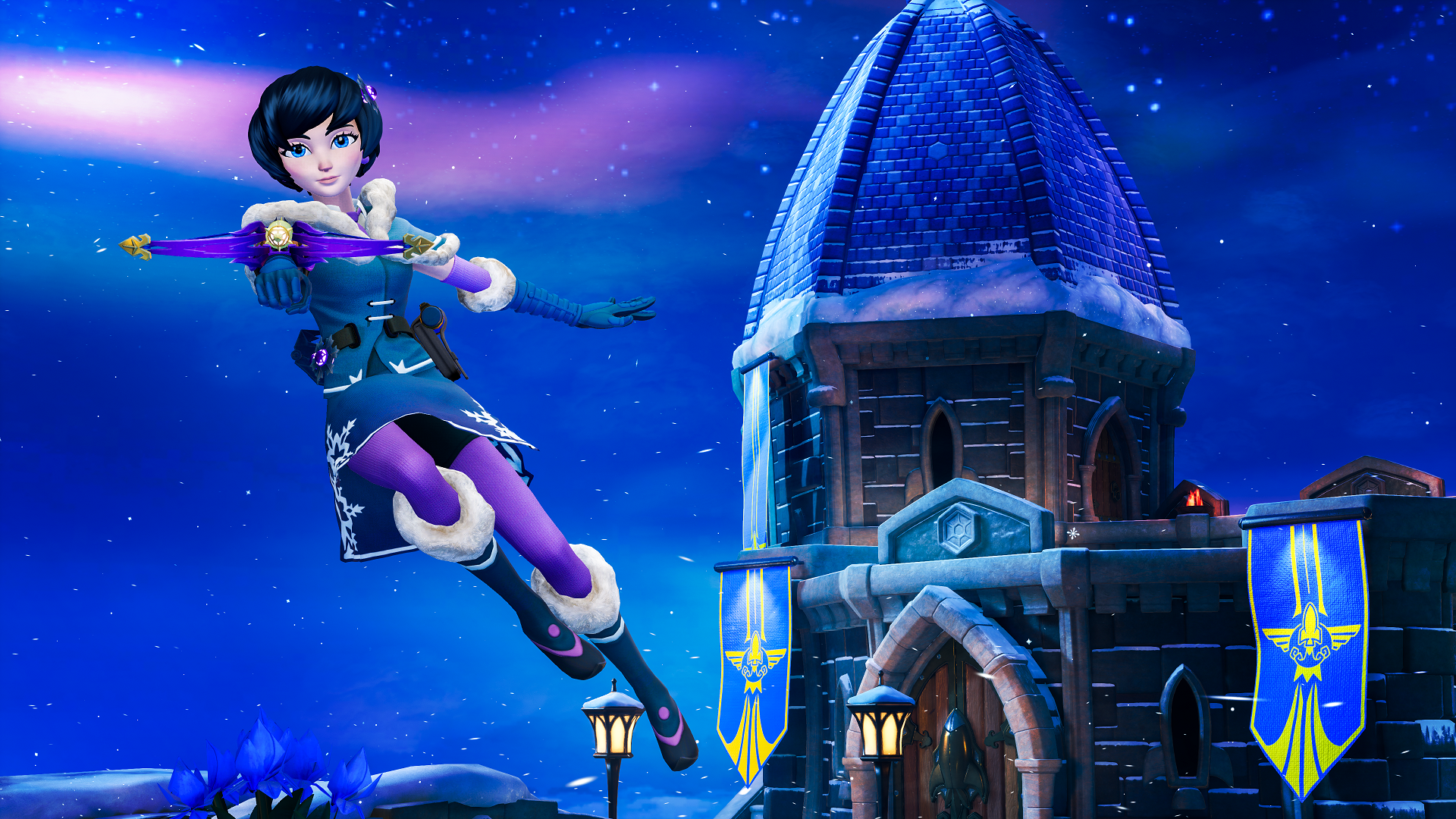 What works heavily against Rocket Arena’s accessibility for console players is the amount of precision and leading shots necessary with some of the more technical champions like Kayi. This not-Mei ice queen uses a wrist-mounted crossbow that can be charged up to fire explosive sniper rounds but requires a great deal of precision to hit the opponent. Although her ammo supply is limitless, missing two or three shots in a row can often be enough to make you lose the firefight.

Rocket Arena’s modes are all familiar takes on modes that have been prevalent in competitive shooters for decades now. You have the standard team deathmatch known as Knockout, a basic take on Halo’s Grifball known as Rocketball, King of the Hill-style capture and hold known as Mega Rocket, another variant on King of the Hill that includes capturing and holding a treasure chest as well as collecting scattered coins in Treasure Hunt, and lastly a cooperative Horde mode that pits players against AI robots in RocketBots. They all work nicely in the Rocket Arena mold but I would have liked to see more unique modes that leverage the unique take on combat but each of the modes should be quite accessible for newcomers that have played at least one arena shooter in the past. 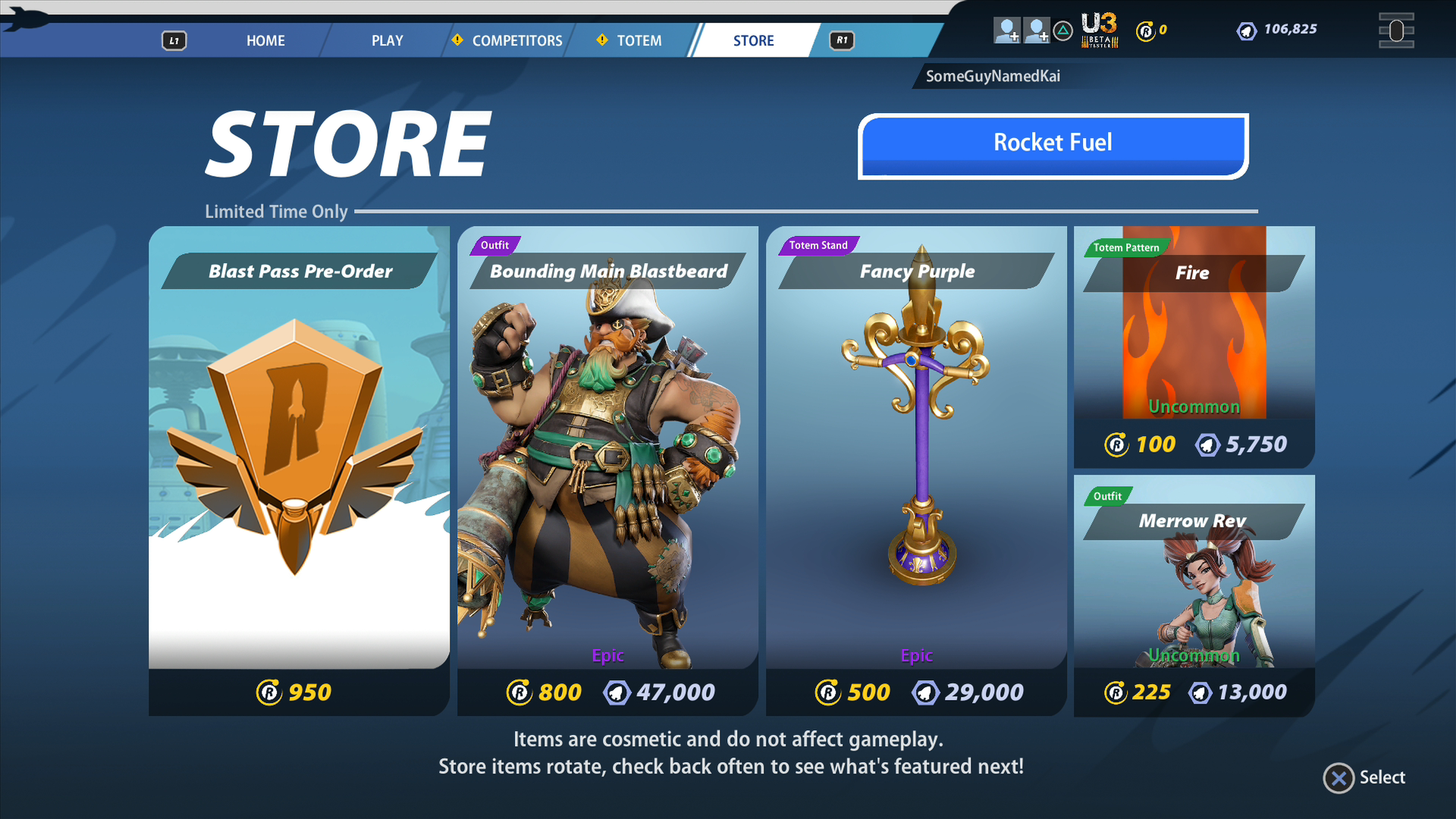 If you haven’t played a shooter before, Rocket Arena does a decent job of onboarding the player with controls and the basics to each mode as well as a very brief tutorial/practice section for each hero. However, there isn’t any way to look at the hero’s abilities when trying to choose your hero in the pre-match setup so if you liked someone’s primary weapon but can’t remember who used it, you just have to pick randomly and hope you got the right champion. Once in a game, you can hit the pause button and get a brief description of their abilities, at least.

The various competitors in Rocket Arena don’t ever die or even have traditional health bars that you’d see in other shooters. As players take splash damage from incoming rocket fire, they build up a blast meter that affects how far they’re knocked back. Once that’s filled up to its critical level, one more direct hit (or multiple if using a character with a rapid-fire weapon) will knock the player out of the arena in a Megablast attack. Staying out of the action for a certain amount of time will reduce the blast meter down to zero, so don’t ever feel like you have to lose a character just because you’ve taken one too many hits. Once a character is blasted out of the arena, they’re slowly dropped back into the arena in a different spot but with the advantage of being able to see everyone’s position on the map as they descend back into the battlefield. Knockouts and Megablasts are often the main way to score in Rocket Arena but players shouldn’t feel punished for getting knocked out of the park too often. 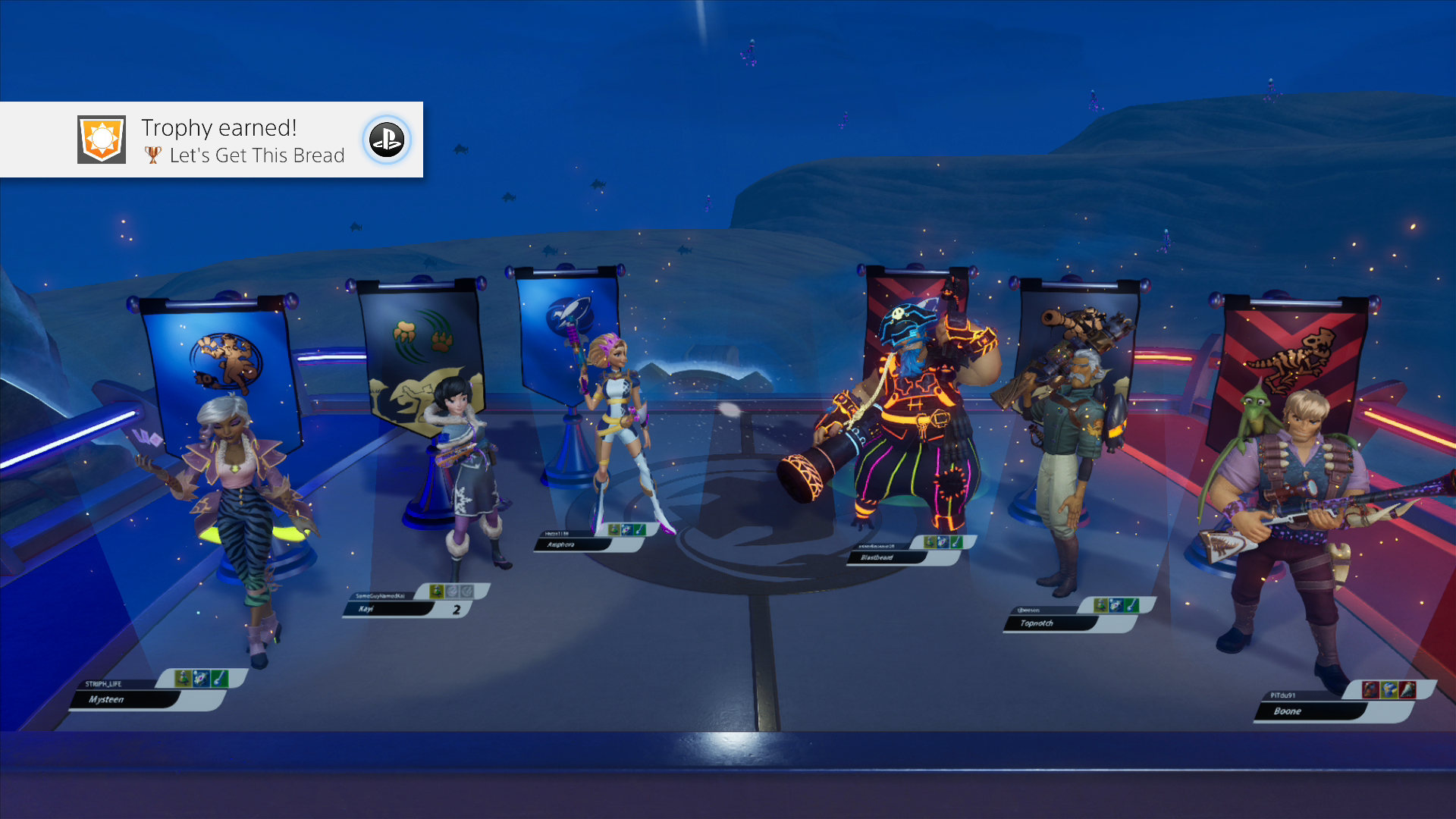 Rocket Arena is unique in the fact that no player in the match ever dies. Couple that with the colorful designs and bombastic gameplay and you’ve got a title that can easily be geared towards a younger audience.

Rocket Arena’s lower player base is quite noticeable even this early on in launch. Multiple matches over the past week have been filled with the same players over and over. There is an optional Crossplay mode that’s disabled by default, so make sure that’s checked if you want to expand your player pool. Of course, that does mean you’ll be facing off against players that might be using keyboard and mouse. With the requirements for precise aiming with the explosive rocket weaponry, some younger players may find the game difficult to get into due to the skill requirement versus other more violent shooters but they can still have a blast playing private matches with friends. 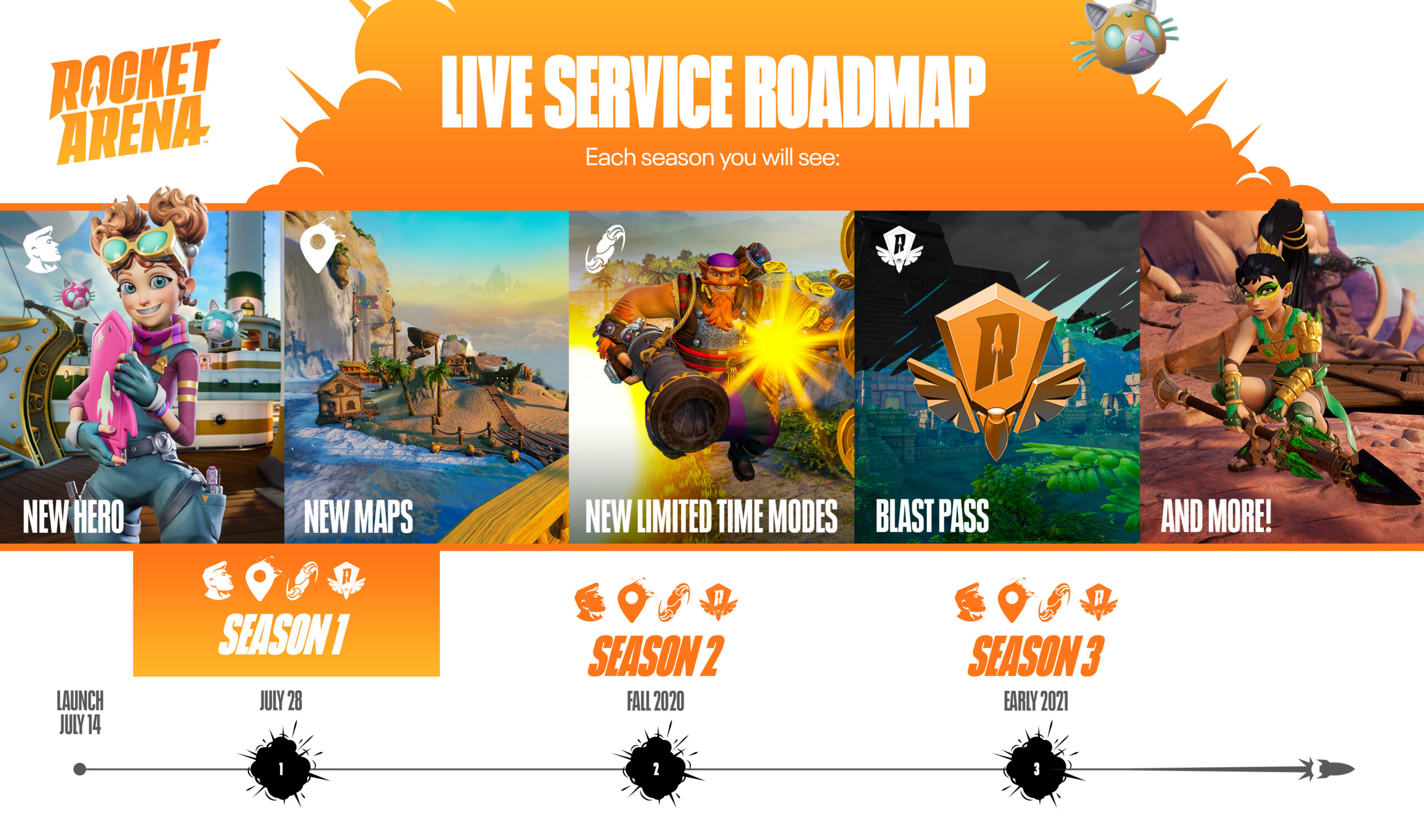 I was initially under the impression that Rocket Arena would launch as a free-to-play game, rather than a $30 title under the EA Originals banner. Perhaps this was the case when Final Strike Games was still planning to partner with Nexon for the release of Rocket Arena but plans seem to have changed in recent years ahead of release. Instead, Rocket Arena is a budget-priced shooter compared to EA’s other lineup and features a small number of microtransactions in terms of character skins and customization options.

As is the standard with most shooters on the market, Rocket Arena too features a season pass (known as the Blast Pass) for approximately $9.50 in real currency for the first one. Subsequent unlocks during the Blast Pass will unlock new Megablast and landing trails among other cosmetic enhancements as well as 1,500 Rocket Fuel (Rocket Arena’s form of premium currency) to purchase. You won’t be able to use the basic currency that’s given out through daily and weekly challenges to purchase the Blast Pass, so plan on the additional initial investment if you plan on making Rocket Arena a part of your regular rotation of shooters.

Rocket Arena does have some potential to be a fun side game for many players but without the free-to-play moniker attracting anyone and everyone that’s keen on trying it out, players may have to put some faith into what’s on offer and sink $30 on the standard edition. Rocket Arena certainly could benefit from the free-to-play model, but that’s merely my own personal take on the game. That being said, Rocket Arena, while it isn’t a perfect arena shooter for some 3-on-3 rocket matches, still has some potential for some really fun teamplays. If there’s anywhere that Rocket Arena can go from here, it’s blasting upwards.

Reviewed on PlayStation 4 Pro (code provided by the publisher).

The post Rocket Arena (PS4) Review – Is It A Blast Or A Misfire? by Kai Powell appeared first on Wccftech.