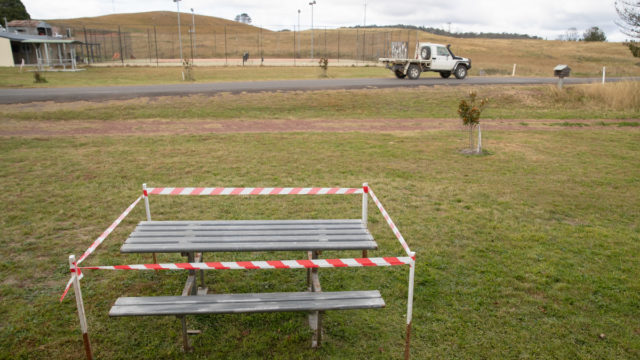 Many Australians who live in the city can trace their childhood back to small country towns, but the coronavirus appears to be testing the old notion of who is local and who is a ‘tourist’.

There are more than 100 active cases in regional Victoria outside the Melbourne lockdown zone, along with reports of people trying to drive into regional areas of New South Wales and South Australia.

Country towns can often be insular places – I was five in the early 1970s when my family moved from the outer suburbs of Melbourne along unsealed roads to the regional dot that would become my ‘home town’.

But I quickly learned that regional Australians have an enormous capacity for laconic good humour, generosity of spirit and values that transcend petty political debates.

Well versed in sudden setbacks, many also show an understanding that you need a plan to tackle the worst that nature can throw at you.

They’ve been doing that, with social distancing and care for others a hallmark of communities.

Our mobile and connected world have encroached on the certainties of country life, and the old hard-edged boundaries between tourists and locals had softened along with the growth in the tourism dollar.

But fault lines are reappearing as some city dwellers ignore medical advice and travel to the regions in a bid to ease their own boredom.

It has not gone down well.

In at least one country pub before the latest lockdowns, there was strife when tourists turned up looking for meals, only to be abused by a local.

The publican posted to social media that such conduct from regulars was unacceptable even if there were concerns about people travelling out of heavily populated areas.

At Orbost, the club hotel was forced to close after a visitor from Melbourne tested positive. It was then forced to push back on an unenlightened out-of-towner who had bought into US-style arguments around the wearing of masks.

In NSW, the Batemans Bay cluster at the local Soldiers Club was also the result of a person travelling from Canberra for an outing.

It is a reminder that hospitality venues in the bush are more than just places to get a drink. They remain vital, if vulnerable, unifying points of contact for smaller communities.

One carrier in a pub could infect a whole town.

With Victoria now the nation’s coronavirus hotspot, Premier Daniel Andrews has consistently urged city dwellers that it is inappropriate to travel to regional areas.

A cluster of 13 cases has been linked to the Australian Lamb Company in the south-west Victorian centre of Colac, pushing the outbreak further down the Princes Highway.

The well-heeled seaside town of Port Fairy was inundated with tourists in the school holidays, despite requests at the time for people to stay in Melbourne.

One permanent resident told The New Daily that it was clear many Melburnians with beach homes had taken up residence, with concerns about the movement back and forward and how the local health system would cope with the holiday-like population if there was an outbreak.

Another spoke of the “horrific” experience of seeing elderly locals caught out by large families in holiday mode walking into shops en masse, ignoring social distancing and crowd limits

After weeks of disruption, regional business owners have been torn between safety first and losing money. It’s a familiar cycle for them.

In the early 1980s during the Ash Wednesday bushfires, my father and I were caught by the flames at a nearby farm and were witness to multiple tragedies.

We were lucky that night to drive back into town along blackened roads and sleep in our beds – our home and livelihood safe and intact.

The advantages of being a townie – in the country or the city.

There was no power or phone that night, but it would not have mattered with regional television offering only the ABC and one other station – and the news bulletins dominated by destruction more accessible to Melbourne.

In that disaster, there were no uploaded selfies as the fires unfolded, or, in the aftermath, photo-op political blow-ins and live-streamed charity concerts.

People in our area just got on with it, secure in the knowledge – if not contentment – that they were out of sight out of mind and they’d look after their own.

In a globalised world, the best and worst of humanity now beams into the Australian bush live 24/7, and it can also beam back.

Gone is the isolation of ordering a book at the library and waiting weeks for it to arrive, or knowing that beyond the edge of town there’s nothing but darkness for a 45-minute drive – or three hours by pushbike.

Now country people, like the rest of us, must sift through the world news and sort the fact from the fake, the opportunities from the opportunists.

We can hardly begrudge them putting the wagons in a circle for a bit and riding out this pandemic with the people they know best.

It’s what most of us are doing, except when we are bored.

Growing up in my little part of Australia it was often, and hilariously, made clear that as a city import I was something of a temporary resident.

To some extent that was right, like many country kids I quickly left to Melbourne for work.

My old school mates – now milking cows, moving dirt and fitting electrics – have continued the lark ever since.

They have often fretted over the ‘city bloke’ stuck among the pollution and the noise when he could just come ‘home’, kick back and enjoy the fresh air.

Now, they just want me to stay put.

The post After drought, floods and fire, regional Australia doesn’t need coronavirus too appeared first on The New Daily.