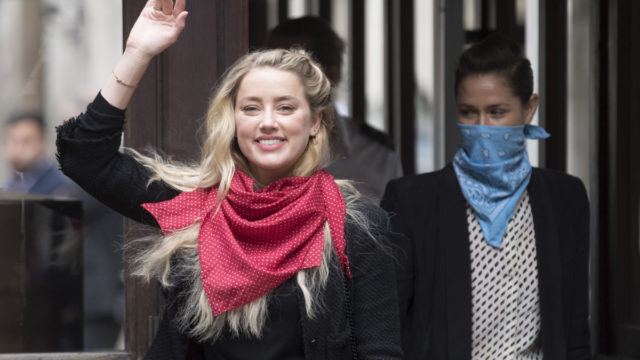 American actor Amber Heard texted her mother in 2013 that she was heartbroken to discover her then boyfriend, Johnny Depp, became violent and abusive when high on drugs and alcohol, likening him to Dr Jekyll and Mr Hyde.

The texts were read to the High Court in London, where Heard is giving evidence on behalf of the publishers of a British tabloid newspaper, The Sun, who are being sued for defamation by Depp over a 2018 article that labelled him a “wife beater”.

Depp, who gave evidence last week, denies all of Heard’s allegations of violence and abuse and says she assaulted him.

On Thursday, the last of four days of oral evidence by Heard, she was asked about an incident she said had taken place in March 2013, when the couple were dating but were not yet married.

In a written statement, Heard says that after a long session of snorting cocaine and drinking whisky, Depp had become enraged by the sight of a painting by her ex-partner, Tasya van Ree, that was hanging on a wall in her apartment.

She says that was the first of many occasions on which Depp was violent towards her.

The court heard that Heard had texted her mother at various points over a period of hours during which the drug-taking, drinking and violence took place.

“He’s nuts mom. Violent and crazy. I am heartbroken that THIS is who I love,” she said in one of the texts.

Johnny Depp arrives at the High Court on the 13th day of his libel trial against the publishers of the Sun Newspaper over an articles describing him as a “wife beater”. He strenuously denies the allegations. He’s late because he’s been in a meeting about a new film. pic.twitter.com/BySBOTBIpn

Asked to explain what she meant by that, Heard told the court: “I was so in love with Johnny at that time.”

She said that when he was clean and sober, he was generous and loving. “He’s a remarkable man when he’s like that. I didn’t want to lose that. I always held out hope he would get clean and sober.”

However, in other texts the same day, she told her mother that Depp had not hit her, that she was “ok physically”, and that he was “raging in general” rather than being violent with her.

Those texts appeared to contradict her sworn witness statement to the court, in which she said he had grabbed her, shaken her and shoved her against a wall during the incident.

She said she feared her father’s possible reaction to that.

In one of the 2013 series of texts, Heard said to her mother: “He (Depp) makes dad look like a saint when he falls off the wagon.”

Heard also texted that “the crazy mood swings and binges are really difficult for me to handle”.

“My heart is broken,” she said.

Heard’s sister Whitney is due to give evidence later on Thursday.

The trial is set to conclude next week although no ruling is expected immediately.