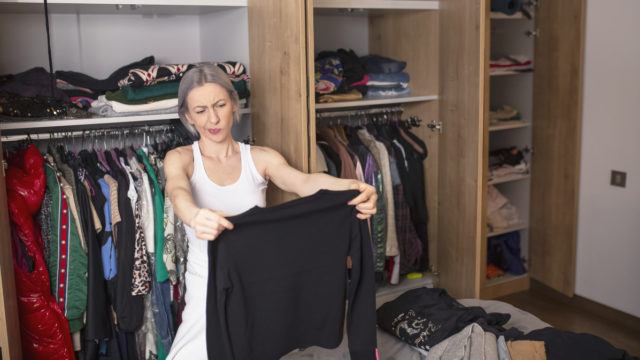 My friend was complaining about the state of her wardrobe last weekend, and how it needed a gigantic clean-out, words that were music to my ears.

I have become the person who likes to sort out other people’s fashion cupboards. I don’t know how I ended up in this place, probably through years of being an editor, watching Hoarders and reading Marie Kondo, but I am an organisational machine now.

COVID isolation caused many of us to reconsider how many clothes and accessories we really need.

I just completed the largest edit ever on my own wardrobe, a mammoth undertaking which took about 10 days to achieve perfection. I now know where everything is in an instant, it all fits, it all has a purpose.

I bought a beautiful chest of bone inlaid drawers on Gumtree in pale lavender which I have accessorized with a vase of red roses, and a blue velvet footstool. I never want to leave my room now, nor get dressed to be honest.

“Can I come over and do it for you now?” I volunteered to my friend, maybe a little too eagerly.

So, there we were in her bedroom on a Sunday afternoon, two women on a mission, fuelled by Diet Coke and being watched by a Maltese Shih Tzu.

It’s a fairly difficult exercise to cull your own stuff, as you may have
to overcome nostalgia for items that are past their use by date, but it is so much easier to edit for someone else. I turned into a complete tyrant. I surprised myself, I was so ruthless and forceful.

I played the role of brutally honest fashion adviser – no that makes your bum look big, no that’s a bit nanna, no its daggy, no absolutely not, it ages you 20 years.

You have to stay strong in the face of resistance, but if you own 14 long sleeved scoop neck black Lycra tops, I am only going to let you keep three, no matter how much you protest.

The argument that I didn’t win was keeping some items that were too small, as my friend insisted she would be losing the unneeded kilos to get back into them. Now, call me Nostradamus, but it mostly doesn’t happen. If, by chance or perseverance, you do take off the extra weight, I predict you will be so pleased, you’ll most likely go out and reward yourself with something new.

We rearranged everything, putting everything within easy reach, which is key, because if you can’t see something, you won’t wear it.

I colour-coded all the blouses and tops, culled the handbags down to less than 10, chose which sunglasses, scarves and jewellery could stay, which could go.

Mission accomplished! Her wardrobe is not only tidier, but more fashionable, and she will be getting extra mileage from fab things she forgot she even had. I did make her throw out all the Miyake Pleats  because I hate it.

The post Kirstie Clements: Show no mercy if you aim to be a wardrobe warrior appeared first on The New Daily.