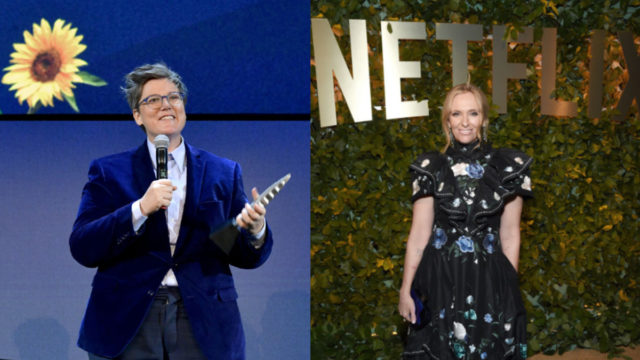 The Emmy Awards will go ahead this year with a reimagined ceremony, and Netflix hits set to dominate when stars and fans alike tune in– or Zoom in – for TV’s big night.

The HBO-production came in ahead of Marvelous Mrs Maisel (20 nominations) and Ozark (18 nominations).

Netflix tallied a record 160 nominations for the 72nd annual Emmys, with Ozark, The Crown, Unbelievable, Unorthodox and Dead to Me among the productions in the running.

Australian star power will shine bright at this year’s ceremony – though it’s unclear whether they will be there in-person, because of the pandemic –  with Cate Blanchett, Hugh Jackman, Toni Collette, Hannah Gadsby and Sarah Snook all scoring nods.

Blanchett and Jackman are used to attending the Oscars and other film industry awards ceremonies, but have successfully crossed over to be in the running for TV’s highest honour.

Blanchett was nominated for lead actress in a limited TV series or movie category for her performance in the historical drama Mrs America.

Jackman received his nod for lead actor in a limited TV series or movie for Bad Education.

He stars in the HBO’s TV movie as a school superintendent who steals millions of dollars from the school district.

Jackman told The Hollywood Reporter soon after the nominations were announced on Wednesday morning (Australian time) that he was feeling “very blessed and humble”.

“I’m grateful to be part of a film that you love doing that people seem to respond to and then you get a nomination. It’s just all icing on the cake. It meant a lot,” he said.

Bad Education debuted at the Toronto Film Festival before being screened on HBO.

Meanwhile, Collette was nominated for her supporting role in the Netflix series Unbelievable which is based on the true story of an investigation into a serial rapist in the US.

Snook also received her honour for a supporting performance in the TV series Succession.

Gadsby is up for outstanding writing for a variety special for her latest hit, Douglas.

The 72nd Emmy Awards will take place on September 20.

Jimmy Kimmel is set to host the live show which is set to be different from previous years, given the ongoing coronavirus pandemic.

It’s not yet known what precautions will be taken to ensure social distancing, but given worldwide travel restrictions it’s likely at least some nominees will have to participate virtually.

Sterling K. Brown, This is Us

Christina Applegate, Dead to Me

Linda Cardellini, Dead to Me

Outstanding Lead Actor in a Limited Series or Movie

Mark Ruffalo, I Know This Much is True

Outstanding Lead Actress in a Limited Series or Movie

Octavia Spencer, Self Made

What We Do in the Shadows

The post Australian star power to shine bright at 2020 Emmys when Netflix dominates appeared first on The New Daily.