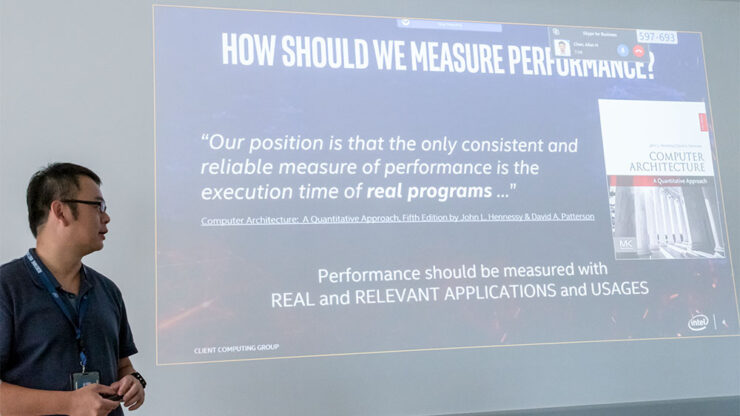 Intel has released a new set of ‘real-world’ performance benchmarks that compare its 10th Gen Desktop CPUs to the AMD Ryzen 3000XT lineup. The company specifically compares the gaming performance of its chip against its competitors and claims that they offer the best performance package at a cheaper price.

The new ‘real world’ performance slides were showcased during a presentation to the APAC regional market. While Intel’s own CEO has stated that the industry should move on from the generic benchmarks showcase, the recent decline in desktop processor shipments has led the company to win over the minds of consumers in the mainstream and high-performance CPU segments with a new set of comparisons. We won’t start with how much controversy the real performance benchmark slides have been marked with since their first outing but recently, the blue team has started using similar priced and similar spec’d configurations that do lead to better representation of real-world usage. 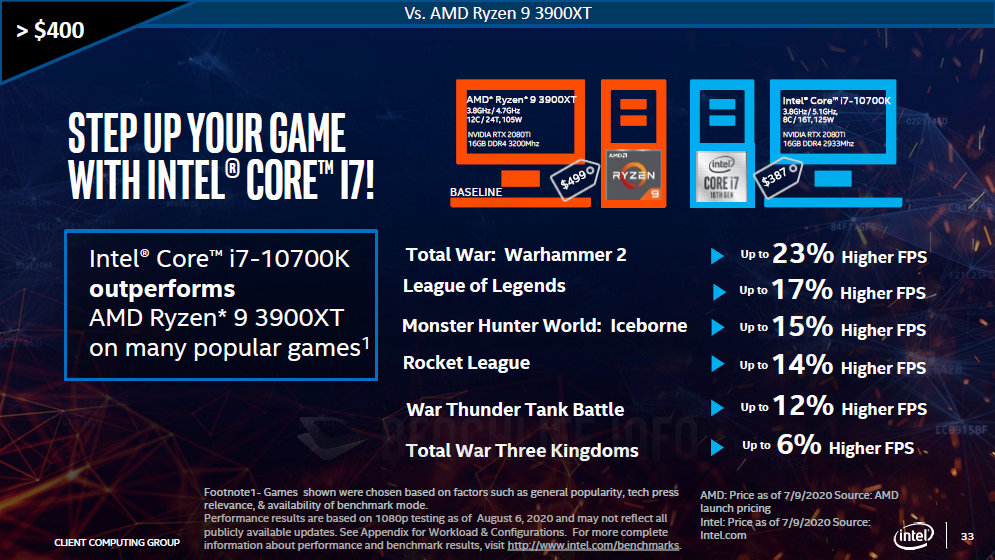 Intel used similar test setups which featured an NVIDIA GeForce RTX 2080 Ti graphics card and 16 GB of DDR4 memory. The memory on the Intel platform was running at 2933 MHz speeds while the AMD platform was running 3200 MHz DIMMs. Now there’s no mention of which motherboard both setups were using but considering that X570 and Z490 boards end up costing around the same, the price difference would be close with Intel offering a slightly better value versus the Ryzen 9 3900XT.

The performance benchmarks show that the Intel Core i7-10700K outperformed the AMD Ryzen 9 3900XT in several AAA titles. The Intel CPU was up to 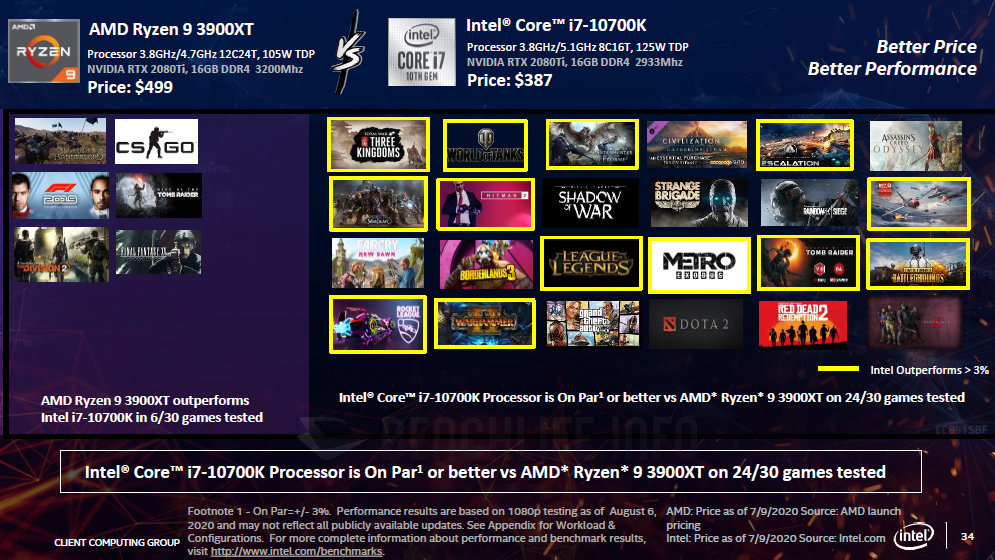 In addition to the games where the Core i7 scored a double-digit win against the Ryzen 9 CPU, Intel also showcased several other titles where their CPU was more than 3% faster than the 3900XT. The lead was seen in 24 out of the 30 titles tested. In the remaining tests, the Ryzen 9 3900XT secured a lead and surprisingly, the AMD CPU scored better than the Intel part in CSGO which is one of the top played eSports titles. All performance tests were performed on a 1080p resolution. The slides were shared by Benchlife however the exact appendix for workload and configurations isn’t shown.

Sure Intel has a solid lead in gaming performance which was the whole purpose of this comparison but a 12 core and 24 thread CPU also has several other benefits than just gaming. The AMD Ryzen 9 3900XT can deliver better performance to game streamers and for general productivity tasks and professional uses which many gamers these days also run simultaneously on their desktop PCs.

Its an added benefit from the several cores that Ryzen CPUs provide and while Intel leads the gaming benchmarks, the gap isn’t huge, especially if we compare the standard Ryzen 9 3900X CPU which costs pretty much identical to the Core i7-10700K in the retail segment. If you’re purely building a gamer-focused machine, then Intel CPUs do retain the advantage but the real question is how long will this advantage reside with Intel with Zen 3 fast approaching the desktop PC market.

The post Intel Claims Its Cheaper To Build A Faster Gaming PC With Its 10th Gen Core CPUs Than AMD’s Ryzen 3000 CPUs, Pits The Core i7-10700K Against Ryzen 9 3900XT by Hassan Mujtaba appeared first on Wccftech.