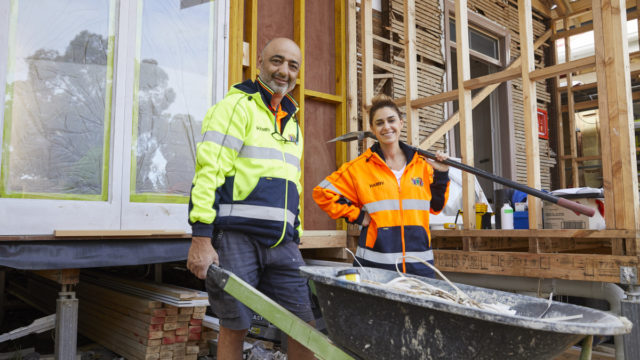 Many of us have used our time in isolation to work on various projects around the house, due largely to Bunnings’ ‘essential service’ status.

But while the lockdown allowed many of us to finally get around to those odd jobs, for others it was a welcome renovation relief.

This season of The Block welcomes its first father/daughter duo, and while the pandemic won’t stop Harry and Tash, it did give them a well-earned rest.

“The week leading up to [the lockdown] was quite stressful to be honest because we weren’t quite sure what was going on,” Tash told The New Daily.

“You’re in a Block bubble when you’re on the show so we didn’t quite understand the severity of what was going on outside.

“So when it was finally announced it was almost a bit of a relief because it meant we weren’t just sitting on the fence.

“It also meant we could have a little bit of time to catch up one some sleep … and it gave us some time to think and hopefully do some more planning.”

Like the rest of the country, the set of The Block called ‘tools down’ and sent contestants home for a six-week hiatus.

Looking to the silver lining, producer Julian Cress said the added coronavirus complications makes this one of the best seasons yet.

“Imagine you’ve got contestants who are watching the Prime Minister’s press conference together in the morning and then having to finish the bathroom in the afternoon. That’s interesting TV,” Mr Cress told TV Tonight.

“We didn’t miss any of it. So we knew we had a damn good show, the trick was ‘would COVID stop us being able to finish it?’ ”

But while the lockdown gave everyone a much-needed breather, there are some complications that concerned contestants.

Harry and Tash are worried about an impending housing market crash, particularly as Victoria suffers through stage four lockdown.

“The auction won’t be for another two or three months – we’ve got a long way to go before then, and the market isn’t the market it was a year ago,” Harry said.

“For me it’s a concern. Let’s hope the market is okay by November … it’s a difficult time.”

Added Tash, “At the end of the day, we are in a buyer’s market at the moment.”

Despite their close relationship, Harry and Tash aren’t immune to some of the pitfalls of going into business with family.

Coming from a loud, Greek family adds an extra layer of drama.

“You’re definitely going to see some – I wouldn’t call them ‘blow-ups’ – but arguments,” Tash said.

“I think because we are family, and we are blood related … it’s that same kind of relationship – you don’t hold back from what you say to your family that you’ve known your whole life.

“We’re wogs, we’re loud, we’re not afraid to say what we mean to each other but at the end of every day, no matter how tense of a day we have had, we always give each other a little hug and apologise for any words that were said throughout the day.”

The post Tools down! Why <i>The Block</i>‘s weary couples didn’t mind the lockdown appeared first on The New Daily.