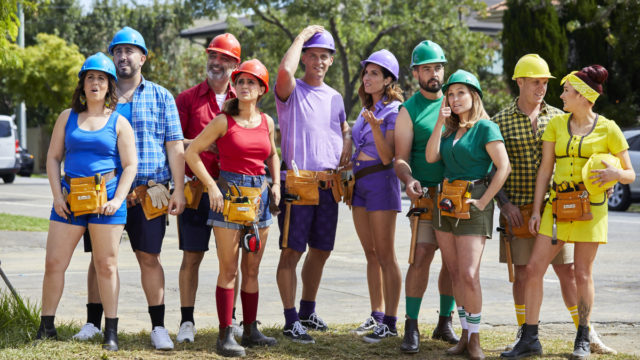 The Block is back and despite contestants battling a lack of materials (due to the pandemic), one thing there won’t be a shortage of is drama.

This time around, contestants are revamping a number of decrepit houses plucked from all over the country and placed on a block in Melbourne’s affluent suburb of Brighton.

Brighton is famous for two things: Beach boxes and its viral mascot, ‘Karen from Brighton’.

Those from Melbourne will instinctively know to pronounce ‘Brighton’ with the customary posh twang.

Early conspiracy theory: Karen was planted by the producers so everyone in Australia knew where to find Brighton on a map.

But viewers have been drowning in Block previews for weeks leading up to the premiere on Sunday night, so the excitement of the time-capsule houses isn’t quite as palpable as Cam is hoping.

Just in case you missed it, this season will see contestants try their hand at renovating five early 20th century, decade-inspired homes from the 1910s to the 1950s.

And to start the season with a bang, Cam is asking contestants to build their own on-site accomodation, inspired by the beach boxes.

The tribute to Karen must be coming in a later challenge.

The Block: Brighton is packed with ‘firsts’.

Harry and Tash are Greek-Cypriots from Victoria, which is unsurprising given Melbourne has the highest population of Greeks outside Greece.

They have a close relationship and great respect for one another, but have an even greater respect for Harry’s mouthwatering gyros-on-the-spit recipe.

We also meet Jimmy and Tam, a plumber and a bar manager from Queensland.

Jimmy reveals he used to be Tam’s CrossFit coach but “spent a bit too much time coaching her,” and Tam tells us she can pour the “best bloody beer in Brisbane”.

Sarah, a teacher, and her partner George, an electrician, are a lively couple from New South Wales.

George has some diverse interests, like collecting Pokemon memorabilia and riding his Harley-Davidson motorbike – the man has range.

Sarah tells us she laughs a lot (Spoiler: she cries a lot too).

Sarah and George: We choose you! ⚡😉 #TheBlock

Daniel and Jade are country folk from “the ends of the Earth”, aka three hours outside of Adelaide.

Jade is a hairdresser and Daniel is a farmer, but he later sneakily reveals he has a long history working as a tradesman.

Luke, a carpenter, and Jasmin, a teacher, are from Western Australia, and we know this because of some dreamy shots of them enjoying fabulous weather at the beach.

The real challenge for these two won’t be refurbishing a house in an absurdly short period of time, it will be surviving the Melbourne climate.

All tears and a few triumphs

The contestants battle it out to win the best Brighton beach box, because that will determine who gets to pick which house.

Everyone is keen on the 1950s house, except cunning strategists George and Sarah who saw a newspaper scrap with George’s name on it in one of the other houses and have taken that as a sign.

George and Sarah need all the help they can get because their complimentary carpenter who arrived to help them with their beach box derailed everything and then hopped off to enjoy his weekend.

Sarah is the first contestant to crack and cries about the carpenter’s betrayal.

Maybe they should have looked for a sign that said ‘labour for hire’.

Luckily, carpenter Jason Charles, a familiar face from last season who worked for Mitch and Mark, is here to save the day,

George and Jason have a budding bromance and a couples nickname to boot – meet ‘The Bling Brothers’.

Despite a few hiccups along the way, all the beach boxes all turn out pretty snazzy, except for Harry and Tash’s because they didn’t finish in time and the paint job is atrocious.

From The Bowlo to #TheBlock! Meet Jimmy and Tam 💛 pic.twitter.com/0wGXFjeMdT

Some contestants have added skylights, some added extra windows, but the most ingenious engineering we see is when Jimmy cuts the top off Tam’s sun hat so she can fit her hair through the top of it.

(To confirm, that is the construction highlight of episode one, yes.)

And while we have to wait until the next episode to see who wins and gets their house of choice, our money is on Jimmy and Tam, for the hat engineering alone.