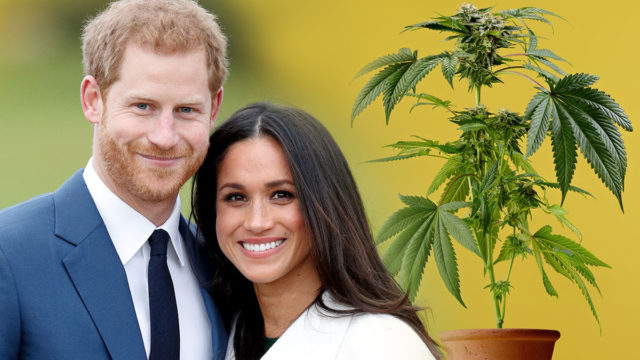 A career change could be in the air for Prince Harry and Meghan Markle, after a billionaire offered them “a golden opportunity” in his lucrative cannabis business.

Recreational cannabis use became legal in the state of California in 2018.

Mr David said the medicinal aspect of hemp farming would appeal to the couple’s humanitarian and philanthropic nature.

“They have a naturally caring nature, so I think the medical potential will be an area they will want to explore,” Mr David told The Express.

“I’ve made it clear in the material I’ve passed on that exciting genetic advances are fast-developing and I want them to be part of that.”

As part of the deal, Mr David would provide the royals with the hemp seeds, free of charge, and then buy back the plants once they have grown.

Heir to the Coca-Cola Hellenic Bottling Company, Mr David has ventured into the wild world of Californian weed farming and has many high-profile supporters, including boxer Mike Tyson.

Currently, more than 35 per cent of hemp cultivation licences stem from Santa Barbara, and Mr David has already penned similar deals with other locals.

The Duke and Duchess have not yet accepted the offer, but they may be persuaded to try Mr David’s special, pain-relieving cannabis blend, titled ‘The Prince Harry’.

The billionaire has invited the pair to his home next month where he intends to “present the Prince Harry seed to them in a gold box”.

“The modification is to supercharge it with CBG, the analgesic, pain-killing part of cannabis.”

The deal could be beneficial for the royals, who stepped down from royal duties and funding earlier this year, opting to make it on their own.

A stake in such a budding industry could also make sense since the two recently bought their $23.4 million Santa Barbara estate.

Given acting gigs for Markle are likely to be scarce in coronavirus-hit Hollywood, the offer couldn’t come at a better time.

It seems gardening runs in the family, too.

Prince Charles is an avid agriculturalist and believes that talking to plants helps them grow better.

“I happily talk to the plants and trees, and listen to them,” Prince Charles said in a BBC documentary.

“I think it’s absolutely crucial. Everything I’ve done here, it’s like almost with your children.”

Mr David is hoping this particular approach runs in the royal blood.

“Charles loves to talk to his plants to help them grow. I know Harry will follow that hands-on approach,” Mr David said.

“The human voice makes a difference. I sing love songs to my plants. It makes them grow quicker.”

No word yet on Prince Charles’ experience in growing ‘the devil’s lettuce’.

The Sussexes  have also expressed a love of gardening, and even planted an extensive fruit, herb and vegetable garden at their former home at Frogmore Cottage.

In a 2017 interview, Markle said her green thumb and passion for gardening was influenced by “growing up in Southern California”.

“We had a Meyer lemon tree and fig tree in my backyard, I loved gardening and growing my own vegetables,” the Duchess told Eyeswoon.

“That farm-to-table ethos was ingrained at such a young age.

“Also, I grew up on the set of the TV show Married with Children, where my dad was the lighting director.

“I would help make the food trays, and learned how connective food could be – how happy people would be when I walked in with a tray of perfect crudités.

“It was awesome, and definitely planted the seed of my love for making and sharing food.”

Whether or not the Sussexes will go into joint partnership with Mr David remains to be seen, but we have high hopes.