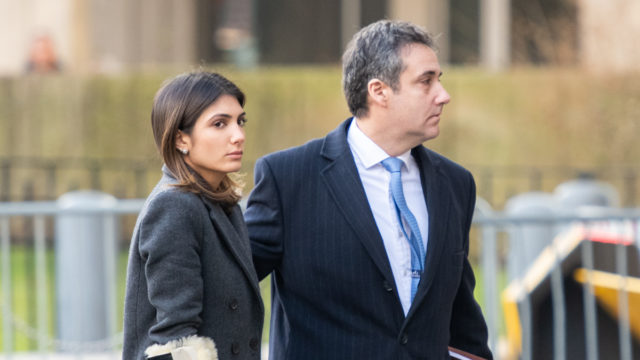 The daughter of Donald Trump’s “fixer” has taken aim at the First Family, revealing the “phoney” and “gross” encounter she had with Ivanka Trump.

Michael Cohen, who served as Mr Trump’s personal attorney from 2006 until 2018, was known for ‘fixing’ his scandals, was sentenced to three years in federal prison for tax evasion and campaign finance violations.

His daughter Samantha Cohen, now 24, spoke candidly about her relationship with the Trumps and Ivanka’s reluctance to acknowledge her.

“She would totally ignore me if she ever saw me. I always found it so strange because she loved my dad,” Ms Cohen told Vanity Fair.

“I had an interaction with her last year. It was a couple of months before my dad got sentenced.

“She saw me and I thought she was going to ignore me, as she had the rest of my life.

“But she grabbed my arm and said, ‘We all feel so terrible about what’s happening to your dad. Our hearts are breaking for him. I’m so sorry that this happened to you guys’ in this high-pitched, sugary voice.

“It just felt like someone threw a bucket of slime on me because it was so phoney and gross.

“But no one actually gave a rat’s ass about my dad or my mom or my brother or me. We were all, as my dad likes to say, collateral damage.”

Don Jr was often belittled by his father, while Tiffany Trump was ignored altogether, she claims.

“Trump never wanted to deal with her, [so] my dad was helpful to her … it can’t be easy being made to feel your entire life like you’re unwanted.” Ms Cohen said of Trump’s youngest daughter.

“When I see her speaking at the [Republican National Convention], I know there’s no way she believes that sh-t. She has friends who are gay. She’s an Ivy League-educated woman.

“There’s no way that she thinks that any of this is a good idea, and her dad treated her like sh-t her whole life.”

In the latest Trump tell-all to hit shelves in the lead up to the US election, Disloyal, chronicles Mr Cohen’s life as Trump’s ‘fixer’.

“From golden showers in a sex club in [Las] Vegas, to tax fraud, to deals with corrupt officials from the former Soviet Union, to catch and kill conspiracies to silence Trump’s clandestine lovers, I wasn’t just a witness to the President’s rise – I was an active and eager participant,” Mr Cohen writes.

One of the scandals addressed in the memoir is the connection between Mr Trump and Stormy Daniels.

Cohen says Mr Trump had a sexual relationship with the adult entertainer while he was married to Melania.

During the investigation into Mr Cohen’s suspicious financial activity, it was discovered he had paid Daniels $US130,000 ($180,000) in hush money to prevent her from talking about the affair.

“Look at that piece of ass,” Mr Cohen alleges Mr Trump said of his teenaged daughter. “I would love some of that.”

Cohen was released from prison in May due to coronavirus concerns after completing just one year of his three-year term. He is serving the remainder of his sentence under house arrest.