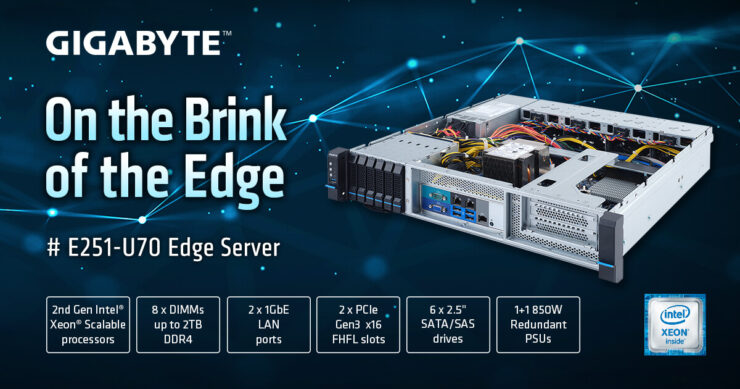 GIGABYTE, an industry leader in high-performance servers and workstations, announced the GIGABYTE E251-U70, which is designed for edge computing applications. The E251-U70 displays what it takes to have high-performance computing, robust storage, and network options all wrapped in a small box. Edge solutions deploy on the edge to handle rule-based analytics, retail applications, AI, and more. The E251-U70 is the first in a new line of GIGABYTE servers called “E-series” designed for edge applications.

The new E-series servers address the need for edge computing in a small form factor. Edge use cases dictate that many edge servers will be deployed in a more confined space and servers must be “down-sized” to fit. The E251-U70 creates a 2U form factor that trims down to 439 x 86 x 449mm (WxHxD), as the depth has decreased from the typical 800-860mm depth to a short depth of 449mm to better-fit edge requirements. At the same time, the server maintains its structural integrity, quality of manufacturing, and good cooling capacity.

The E251-U70 supports a single 2nd Gen Intel Xeon Scalable processor that is up to 205W. With this platform, the E251-U70 is able to have up to a 2TB memory capacity of 2933MHz DDR4 split across 8DIMM slots. Even though the platform has 6 memory channels, the DDR4 server memory is still able to run at 2933MHz thanks to a GIGABYTE feature. In addition, the E251-U70 has support for Intel Optane DC Persistent Memory so the server could be populated with 6 x DDR4 DIMMs and 2 x DCPMMs.

When it comes to storage, the E251-U70 has six hot-swap HDD/SSD bays leaving plenty of room for scaling up while supporting RAID 0, 1, 5, 10. On the motherboard, MU71-SU0 is a slot for an M.2 drive to be used for database applications or cache for drives. Because of the choice in storage bay layout, there is room for accelerators as GIGABYTE was able to fit in a riser card that can support up to two full-height full-length GPUs. Last, there are dual 1GbE LAN ports. This configuration offers a great balance of computing power, storage, and scalability.