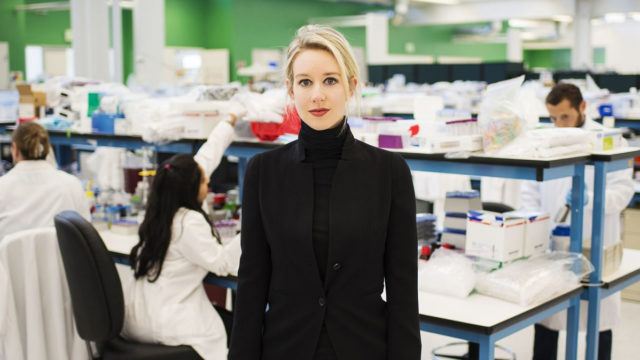 The Inventor: Out for Blood in Silicon Valley depicts Theranos founder and former CEO Elizabeth Holmes as a bewitching sociopath.

Holmes wanted to revolutionise health care by providing a simple and cheap way to perform blood tests using only a finger prick.

In 2003, she founded Theranos, with a vision of the company’s machines in every home in America.

But, as the Wall Street Journal’s John Carreyrou revealed in 2015, Holmes created an intricate web of deception. Even as machines found their way into chemists and were being used by medical insurance companies, they never actually worked.

The documentary is compelling viewing, but as it enters a very slim field of movies about female entrepreneurs, it is worth questioning the impact of the stories we choose to tell.

The journey Holmes took from young idol to spectacular failure is a story about systemic issues and the sometimes toxic culture of the world of start-ups.

Prior to the scandal breaking, Holmes was celebrated in the media.

She was portrayed as a Stanford University dropout with a vision for changing the world. She raised hundreds of millions of dollars from powerful men in a start-up landscape known for its discriminating funding practices.

She made the cover of Forbes magazine in 2014 as the world’s youngest self-made female billionaire.

Holmes represented a heady mix of tech, science and business. She was the golden girl of the start-up world.

This made her fall from grace even more spectacular.

But compare Holmes’ portrayal with another well-known example of a deceitful male entrepreneur: Jordan Belfort, the “wolf of Wall Street”.

Belfort ran an elaborate crime scheme linked to manipulating the stockmarket and was jailed for 22 months for securities fraud.

Nonetheless, his autobiography and Martin Scorsese’s 2013 film adaptation depict Belfort’s story as a celebration of wealth and power, rather than a critical review of his fraudulent behaviour.

Where are all the good stories?

Feature films about female entrepreneurs are few and far between.

Research from one of the authors examined English-language films from 1986 to 2016 with female entrepreneurs as the central character.

Over the 30-year period, only 11 films about women entrepreneurs were identified – fewer than the number of films about Apple co-founder Steve Jobs alone.

Businesses depicted typically had low numbers of paid employees. The entrepreneurs were resource poor, and most often it was a supporting male character who helped the female entrepreneur succeed.

Additionally, the study found a woman starting her own business is seemingly not enough to hold audience attention: All films included a parallel romantic storyline.

The female entrepreneur as role model

Role models provide a source of inspiration and contribute to self-belief. As the quantity of entrepreneurship-related media increases, so does the amount of entrepreneurial activity.

However, negative portrayals of careers may prevent people from considering a profession.

The case of Holmes and Theranos is damaging for the betrayed customers and investors, but also for the field of entrepreneurship, which only in recent decades has seen its reputation overhauled.

Entrepreneurship was once the domain of racketeers.

Over time, it has evolved to be the domain of tech celebrities, socially conscious founders and a vehicle for upward social mobility – but still, too often, a domain of men.

One study investigated how female entrepreneurs are featured on the cover of Entrepreneur magazine.

Women were vastly outnumbered by men on the cover, and were often portrayed in a stereotypical female fashion.

Women were “glamified” in full make-up and focus given to their face, while men were more likely to be standing and set against a corporate colour palette.

How we tell stories of female entrepreneurs matters.

Positive depictions of innovative women act as a mirror, showing girls and women what they can achieve.

The Inventor is now streaming on Binge.

The post <i>The Inventor</i> tells of a fraudulent female. Where are the successful women entrepreneur films? appeared first on The New Daily.