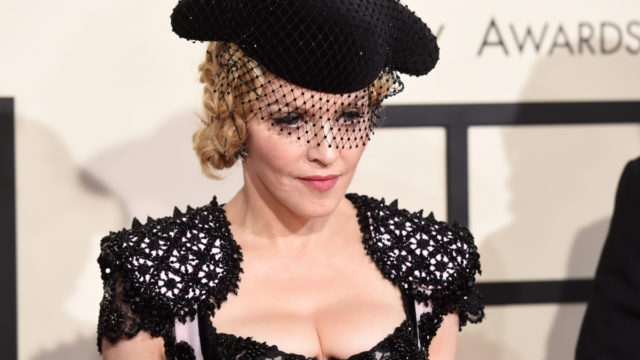 Madonna isn’t letting her past film fails keep her from stepping off the stage and behind the camera, as she prepares to helm a movie about her life.

As well as directing the film, the queen of pop will also co-write – with help from Oscar-winning screenwriter, Diablo Cody (Juno, Young Adult).

The project has yet to be named, but will chronicle her rise to superstardom from the slums of New York, and how her hit songs Like a Virgin, Vogue and Material Girl shaped her career.

It will also cover the aftermath of the controversial music video for Like A Prayer, her relationship with the late Jean-Michel Basquiat and her “struggle as an artist trying to survive in a man’s world”.

“I want to convey the incredible journey that life has taken me on as an artist, a musician, a dancer – a human being, trying to make her way in this world,” Madonna said in a statement.

“It’s essential to share the roller coaster ride of my life with my voice and vision.”

Following the steps of Queen and Elton John, the 62-year-old is the latest musical icon to have her life immortalised on the big screen.

And while we all rush to find our lace, fingerless gloves and cone-bras, it might be worth noting some of Madonna’s earlier endeavours into the world of cinema.

Hung Up on the silver screen …

Despite holding the record for being the biggest-selling female artist of all time, Madonna’s attempts to break onto the big screen haven’t been quite as favourabllt reviewed (Desperately Seeking Susan and League of Their Own notwithstanding).

Ever the high-achiever, ‘Madge’ can add another record under her belt – this time, for the most Golden Raspberry Awards (Razzies) ever given to a single actor.

Hopefully those awards can keep her seven Grammys company.

Madonna’s foray into film has, for the most part, been so heavily lambasted by critics it’s a surprise that anyone who saw notorious flop, Swept Away, let her anywhere near a production set ever again.

But her film fails haven’t hindered her spirit or enthusiasm (though in some cases, they probably should have).

Though it tanked at the box office, Who’s That Girl has since built up a cult following for being one of those films that is so bad, it’s good.

The film centres on an uptight tax lawyer who connects with a young ex-con (Madonna) who enlists him to help to prove her innocence.

The subpar acting and tired, manic pixie dream girl tropes are only softened by the peak 80s attire.

If you’re into oversized blazers, costume jewellery and fishnet stockings, this is the movie for you.

(Watch it on Apple TV)

Pegged as one of the worst films of the 1980s (which is saying a lot), Shanghai Surprise stars Madonna in her prime, alongside her then husband, Sean Penn.

Set in 1938, the queen of pop plays a missionary who hires a fortune hunter (Penn) to help her recover 500kg of missing opium.

The film was nominated for five Razzies, with Madonna taking out the award for worst actress.

(Available on SBS on Demand)

By the early 2000s, Madonna had been ruling the music charts for nearly two decades and was still releasing hit after hit.

In fact, her single Die Another Day came out the same year she starred in what came to be known as one of Hollywood’s worst films ever.

Written and directed by her second husband, Guy Ritchie (who later claimed her cast her because she was “cheap and available”), Swept Away follows a snobbish housewife who becomes stranded on a desert island with a communist sailor.

Though you wouldn’t guess, the film had a budget $US10 million, but had barely made half a million when it was pulled from theatres only weeks after it opened.

Winning seven Razzies, including worst picture, worst director, worst actress and later, worst picture of the decade in 2010, Swept Away is thought to have been the nail in Madonna’s acting career.

And while it is still unknown whether she will act in the biopic, tit would appear that Madonna’s film career is destined to die another day.

The post Express yourself: Madonna to helm new movie – about her life appeared first on The New Daily.