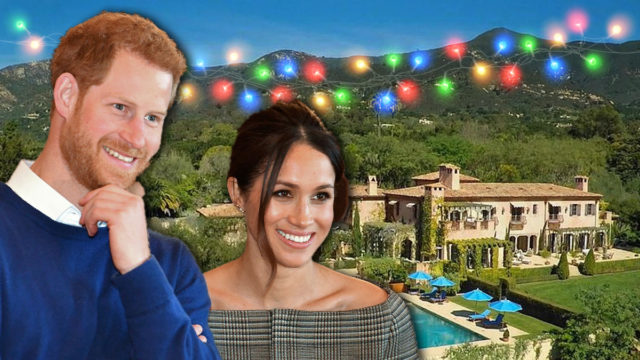 Prince Harry and Meghan Markle are abandoning a long-running royal tradition and will spend Christmas with a successful music producer and his wife.

Instead of spending the festive season with the Queen at Sandringham House, the Duke and Duchess of Sussex have invited David Foster, 70, and his wife, Katharine McPhee, 34, to their Santa Barbara home.

The friendship between the two couples has blossomed since the Sussexes moved to the US, and new reports suggest Foster was responsible for introducing them to the Netflix executive who inked their lucrative deal.

A source claims the couple, and their 16-month-old son Archie, are keen to branch away from the royal customs in order to start their own festive traditions, with Meghan reportedly eager to host her own Christmas lunch.

“Meghan very much wants to host the first Christmas at their new home with her mum,” a source told The Mirror.

“She’s really excited and is planning on doing all the traditions she grew up with as a child, including the cooking.

“They’ve also invited David and Katharine to spend it with them.

“David had mentioned Harry and Meghan going to theirs, but Meghan wants it at home.

“They want to get on with their new lives. Christmas with Harry’s family is not in the plan.”

Foster, a big name in the music industry, is well connected in Hollywood and has worked with some of the most successful artists, including Mariah Carey, Madonna and Celine Dion.

McPhee is a singer, and has close ties to the Duchess. The two went to school together at Immaculate Heart High School in Los Angeles.

Before marrying McPhee, who is 36 years his junior, Foster was married to Caitlyn Jenner’s ex-wife, Linda Thompson, and also Yolanda Hadid, mother of models Gigi and Bella Hadid.

In May 2020, McPhee compared the relationship between Prince Harry and her husband, who is one year younger than Prince Charles, to that of a father and son.

“We just stay in touch with them but mostly, Meghan and I knew each other from childhood, but really Harry and my husband are friends. It’s really nice.”

This isn’t the first year the Sussexes have opted out of the big family Christmas.

In 2019, the couple caused controversy when they skipped the annual Sandringham Estate celebrations and stayed in Vancouver Island where they were living at the time.

Having moved twice since then – first to Los Angeles, and then again in August to Montecito, Santa Barbara – it seems the couple are finally ready to settle down and lay roots.

Guests at the Sussexes first Californian Christmas lunch will have more than enough room to enjoy the festivities, with the $US14.65 million ($20 million) mansion boasting resort-style amenities.

Their neighbours include some of Hollywood’s highest-profile stars, such as friend of the family Oprah Winfrey, Ellen DeGeneres, Gwyneth Paltrow and Ariana Grande.