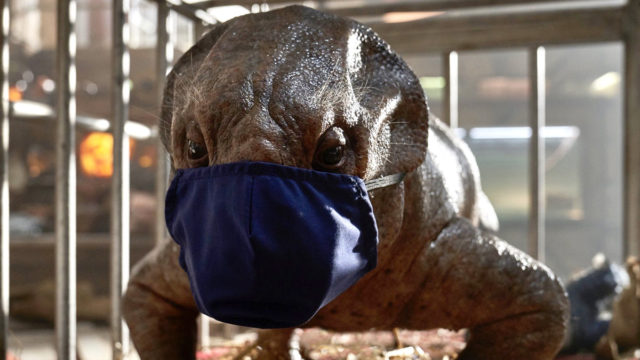 Filming on the new Jurassic World movie at Britain’s Pinewood Studios has been suspended for two weeks because of COVID-19 cases on set.

Director Colin Trevorrow tweeted on Wednesday that there were “a few” positive tests for the virus.

He added that the individuals tested negative shortly after, but that shooting would be halted for a fortnight to adhere to safety protocols.

A spokesperson for Universal Pictures said they were informed of the positive tests on Wednesday (Australian time) and that all tested negative on Thursday,

“The safety and wellbeing of our entire cast and crew is paramount,” the spokesperson added.

“Those who initially tested positive are currently self-isolating, as are those who they have come into contact with.”

The franchise starring Chris Pratt was one of the first major Hollywood productions to restart after pandemic-related shutdowns.

Actor Sam Neill is also among the cast, with the 72-year-old reprising his role as palaeontologist Dr Alan Grant nearly 30 years after he first took visitors to the dinosaur-riddled island.

“Hold onto your hats – gettin’ my old one back on this week, and facing off dinosaurs once again,” Neill wrote on Twitter two months ago.

“Best yet. Excited and terrified – these things will kill ya.”

Laura Dern and Jeff Goldblum will also share the screen – in a reunion that comes almost 20 years after their last prehistoric endeavour, Jurassic Park 3, was released in 2001.

It will be the first time Dern, who played Dr Ellie Sattler, and Neill reprise their roles. Goldblum briefly returned as chaos theorist and mathematician Ian Malcolm in Jurassic World 2: Fallen Kingdom.

In August, the New York Times wrote about the enhanced safety protocols on the Jurassic World set and a few crew member cases in Britain and in Malta over the northern summer.

On Tuesday, Universal said the release of Jurassic World: Dominion was being delayed a year to June 2022.