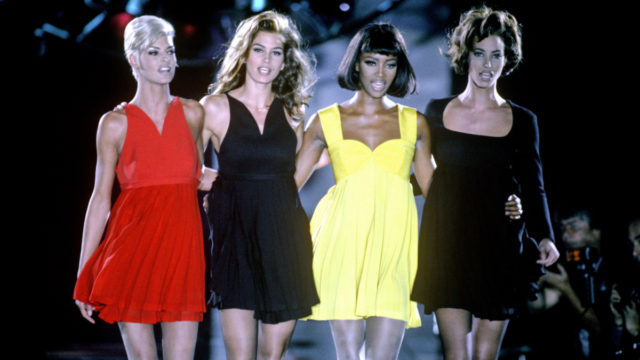 They were the women who turned mere modelling into supermodelling – now, the rise and rise of Naomi, Cindy, Linda and Christy is being chronicled in a new docuseries.

A sure-fire sign the 1990s are back in a big way, the series follows the four from the 1980s into their peak, as designers begged them to wear their collections and Linda Evangelista dropped that famous line.

Exact details for The Supermodels  are scant, but we know so far that it’s directed by Barbara Kopple and features exclusive interviews with the models.

Naomi Campbell has already shared her excitement for the series via Instagram, saying “my sisters Christy, Linda, Cindy and I are extremely thrilled to share our story with the world”.

“We hope our journey seen in the docuseries will encourage, motivate and inspire young people around the world,” Campbell wrote.

♥️♥️♥️♥️ To finally have the opportunity to tell our story in collaboration with the brilliant team at Imagine, and under the direction of Barbara Kopple, is as exciting for us as we hope it will be for viewers. I would love for people to see this as a celebration of not only our individual stories, but also to the power of friendship, dreams and perseverance. “The Supermodels” coming soon to @AppleTV. 🎥 • • • • @AppleTV @ImagineDocs @ImagineEntertainment @Naomi @cindycrawford @lindaevangelista @cturlington @barbarakopple @BrianGrazer @RealRonHoward

Cindy Crawford, Christy Turlington and Evangelista shared similar sentiments on their accounts, posting the same photo of the four.

While they were eventually joined by Kate Moss, Claudia Schiffer and Tatjana Patitz, these four are credited as started the concept of the supermodel, who transcended the catwalk to become an icon all of her own.

Before the series starts streaming on Apple TV+, here’s a look back at the beauties who changed the way we dress.

Campbell made history in so many ways. On the cusp of her 16th birthday, she became the first black model to feature on the cover of British Elle magazine – the first of many firsts.

Mood :TBT I woke up this morning empty not knowing . Reflecting on all these past decades , Wondering to myself , Have we moved forward in society or in life ? Well we are going to Rise , like never before , as Karma has to give back . I’m going to stay in the mind of belief and we will not let anyone or anything change the way we feel , “and we will be positive in our actions , that this too shall pass “And the world will flourish again with equality .. And that hope will be a reality .#STAYSTRONG ❤️ 📸Steven Meisel

She’d go on to do the same in the August 1988 edition of French Vogue.

Still, being a pioneer in the industry didn’t pay. She was as famous and recognisable as the other three, but she didn’t get given the same pay cheques.

“I may be considered one of the top models in the world, but in no way do I make the same money as any of them,” she said in 1991, at the peak of her fame.

As time wore on, Campbell became shrouded in controversy, fuelled by a secret cocaine addiction. She was fired from agencies, and in 2006, made headlines for throwing her mobile phone at her housekeeper.

It appears she’s past that all now, at age 50, she’s on a staunch mission, campaigning for Africa and African fashion.

Cindy Crawford was the girl next door to end all girls next door.

She could almost be single-handedly credited with the red lipstick that women across the world carry in their handbags.

Her trademark mole catapulted her to stardom, as she appeared on magazine covers, on talk shows and in music video clips for the likes of Bon Jovi and George Michael.

She married the man of the ’90s, Richard Gere (albeit briefly) before going on to wed her current husband Rande Gerber in 1998.

Crawford still appears in fashion shoots today, and her children have gone on to follow in her extremely famous footsteps.

#TBT the @britishvogue cover that inspired George Michael’s Freedom90 video ❤️ With the 30th anniversary of the video release coming up, @naomi, @cturlington, @lindaevangelista, and @tatjanapatitz reminisced with our friend @mrfeelgoodhq (more in my stories!). Swipe for some BTS shots you might not have seen from the cover shoot 📸 Photos by @therealpeterlindbergh

Turlington is best known as the face of Calvin Klein, an association that began for her at the age of 20, when she signed a seven-figure deal with the designer.

She went on to be named the ‘Face of the 20th Century’ by the New York Metropolitan Museum of Art.

As she began to step down from the catwalk, her career was only just beginning. She began her yoga wear line, and earned dual degrees from New York University.

In 2000, her life-long smoking habit caught up with her and she was diagnosed with early onset emphysema, age 31.

In 2010 she launched Turly Pictures and a charity, Every Mother Counts, dedicated to improving maternal health.

In an industry where your look was your brand, Linda Evangelista made her mark as a chameleon.

She was famous for constantly changing her hair – although its most famous iteration was a 1989 short ‘do – The Linda – replicated most notably by Demi Moore in Ghost.

Having made plenty of coin by waking up for no less than $10k a day, Evangelista retired from the business in 1998.

She’s dipped back in front of the camera every now and then, but never staying for long.

She’s used her fame to raise awareness for research into breast cancer, and HIV/AIDS.

The post The ’90s aren’t back – they never left: <i>Supermodels</i> doco tracks the height of fashion appeared first on The New Daily.