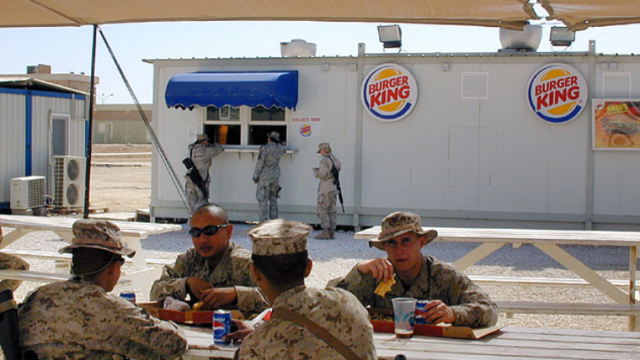 In the mid-2000s, US troops used to refer to the relatively safe and luxurious Al-Asad Airbase in Anbar Province – which had such amenities as an indoor swimming pool, a cinema and multiple fast food outlets – as ‘Camp Cupcake’. When the ten Australian commandos, including Nathan Knox, arrived there in October 2014, they found a base that was a long way from being the oasis it had once been.

The men were greeted by a pair of Green Berets, part of a US element inserted almost a month earlier, and taken to the demountable in which they would be bivouacking.

As they walked they observed a huge but near derelict base. Only hints of what the base had once been existed: old copies of the US military paper Stars and Stripes left in dusty trailers, the odd Green Beans coffee cup or torn Burger King wrapper half covered in sand.

One US Marine colonel, who had spent time on the base in 2007 and 2014, described his return to the base as akin to ‘a scene from The Twilight Zone’.

Al-Asad was now the home of the Iraqi Army 7th Division, who were known as one of the more effective conventional units in the Iraqi Security Forces, but who had been devastated in the fight against Al Qaeda in Iraq and then Islamic State.

Some Sunni tribal groups had been in a state of revolt since late 2012, and many of those had pledged themselves to al-Baghdadi and his group. Fighting had been intense since then, and Fallujah, a city roughly the size of Canberra, had mostly fallen to Islamic State in January, with Ramadi, the provincial capital, also having lost suburbs.

Hundreds of soldiers from the Iraqi Army division, including their commander, had been killed in the recent fighting, which had drawn tanks and men from Mosul to Anbar before the Islamic State June offensive, a move that likely contributed to the jihadists taking the northern city so easily.

To the west and south of the Al-Asad Airbase was hundreds of kilometres of desert, mostly empty and now undefended, which was dissected by Iraqi Highway 1, the road on which Ian Turner and Andre Remmers used to transport police vehicles from Jordan to Baghdad.

To the east of the base was the Euphrates River, the life source for most of the province’s towns and small cities, almost all of which were now under at least partial Islamic State control. To the north was the city of Haditha and next to it the strategically important Haditha Dam, both still under federal control, but under regular attack.

By October 2014 when the Australian SFAT inserted, the 7th Division was devastated, exhausted and, it would be fair to say, besieged, with little capacity to project much outside the fence of Al-Asad. The Australians were told that at Al-Asad they would find a CTS platoon that they could partner with on offensive operations.

After setting themselves up in some old shipping containers, and naming the area ‘Camp Wood’ after Brett Wood, a commando corporal who was killed in action in Afghanistan and posthumously awarded the Medal of Gallantry, the Australian SFAT asked to be taken immediately to the CTS team, and there they were greeted with a disheartening sight.

‘It was about 30 dudes, all broken toys,’ says Knox of the CTS element.

There were guys missing legs, and some had f****ed-up faces. They were lingers, just hanging around.’

One of the Australians asked what kind of missions the CTS unit had been running from the base. The ranking CTS officer told him they weren’t running missions. What, then, were they doing?

‘Nothing. We don’t do missions. We’re just here,’ he said. It was a rehab platoon; a group of soldiers who could no longer be in the fight, for either physical or psychological reasons. Perhaps some could be integrated back into the fight at a later point, but not any time soon.

This was a disappointing turn of events for the shooters in the SFAT, who had been tasked with planning missions and advising the CTS operators.

Instead, the shooters were looking at a rotation of rebuilding the defensive structures of the vast base and perimeter patrolling.
In a reversal of roles it was to be Nathan Knox, the electronic warfare operator, and the Australian JTAC who would be far more involved in the fighting.

Al-Asad Airbase was to become the location for Iraq’s third strike cell, coming online a few months into the Australian rotation, but even before that happened the

American soldiers had set up a Tactical Operations Centre (TOC) from which air strikes could be called in via the strike cells in Baghdad and Erbil.

Nathan Knox was taken to a small room adjacent to the Anbar TOC dedicated to intelligence collection: tactical and strategic.

Working with an Iraqi Army interpreter, Knox straightaway started to build network diagrams from Iraqi and US intelligence already gleaned, and new auditory and visual intelligence. Over the days and weeks, it would be Knox’s job to gain an understanding of the structure of the Islamic State insurgency outside of the wire in Anbar; how many cells there were and where, how many men were in each cell, how each cell related to the others and, on an individual level, who was a commander and who was a foot soldier.

The job would then be to kill, starting at the top and working down.

‘When I get there I discover [Islamic State is] a structured military force at that point. They have resupply structure, they have communicators, mortar teams, suicide bombers, special forces,’ Knox says.

Knox started to learn about the history and composition of the organisation. For instance, the persistent rumour that many of the Islamic State commanders were former Iraqi Army officers was confirmed to Knox as he heard them call in artillery.

‘Their artillery was on point. Extremely accurate, well planned and thorough in barrages. You could tell the way they were talking was professional. “Send two rounds this grid, over.” Stuff like that.’
Even before starting work at the TOC, the Australians understood the capacity of Islamic State, with most days at Al-Asad starting with a post-dawn rocket barrage.

With CTS and the 7th Division largely unable to leave the base, the US Special Forces and 2 Commando tasked themselves with connecting with those who were actually fighting in Anbar.

The one and only road from the airbase snaked north- east, toward the Euphrates, and a riverside town called al- Baghdadi, which was holding out against the Islamic State. Al-Baghdadi was accessible by Iraqi Route 12, which went north to Haditha and then on to the Islamic State capital Raqqa and south to the provincial capital of Ramadi, and also to Baghdad.

For soldiers at Al-Asad, both towns were of utmost strategic importance.
Knox built connections with Iraqi commanders on both ends of Route 12. In Haditha one of those connections was Hassan al-Sayyab, a young and suave Sunni police captain who joined the Iraqi Security Forces after Al Qaeda in Iraq attacked the Haditha police station a few years earlier, killing his uncle and two cousins. 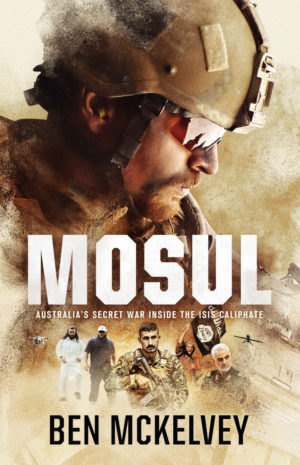 Al-Sayyab’s unit, the Emergency Response Division (ERD), was an up-skilled paramilitary unit that reported directly to the Ministry of Interior and seemingly had much better equipment and pay than most Iraqi units. They had proved highly effective in the repulsion of Islamic State attacks against Haditha and the Iraqi government hoped they would augment and support CTS when it was finally time to attempt to retake Mosul.

This is an edited extract from Mosul: Australia’s secret war inside the ISIS caliphate by Ben Mckelvey. Published by Hachette Australia. RRP $34.99