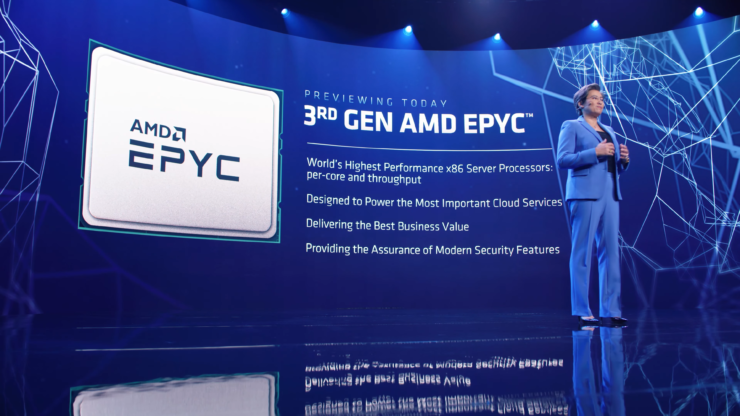 During its CES 2021 keynote, AMD demonstrated the performance of its 3rd Generation EPYC Milan CPUs based on the Zen 3 core architecture versus Intel’s Xeon chips based on the Cascade Lake design. The performance was demoed in WRF which is a climate research and weather forecast tool used by HPC to simulate weather and is used by 185 countries for that specific purpose.

AMD’s CEO stated that the two Intel Xeon Gold 6258R CPUs they pitted against their own EPYC Milan CPUs are comparably configured. We know that the Xeon Gold 6258R features a total of 28 cores and 56 threads and has a boost clock of up to 4.00 GHz. It comes with a TDP of 205W and priced at $3950 US. No specifications for the 3rd Gen EPYC Milan CPU which was tested were listed aside from their core count which is 32 cores and 64 threads.

The AMD 3rd Gen EPYC Milan (2P) CPUs were able to complete the weather forecast simulation of the United States much faster than their competitor. AMD stated that the performance difference is about 68% which is literally insane for the Zen 3 powered EPYC lineup. At the same time, we can use these results to guesstimate where Milan lands against Intel’s Ice Lake-SP processors. We know that Ice Lake with Sunny Cove cores offers an 18% IPC increase. Considering that we will see Xeon CPUs with Ice Lake-SP featuring these brand new cores and also upgrades to cache and clocks, the Intel Xeon Ice Lake-SP chips will end up much faster than Cascade Lake-SP but at the same time, it wouldn’t be enough to outperform 3rd Gen EPYC.

In fact, AMD will retain their leading position in the server platform, offering nearly 30-40% better performance versus Intel Ice Lake CPUs. The only saving grace for Intel will come in the form of the AVX-512 instruction set which offers just marginally better performance compared to EPYC Rome CPUs as Intel previewed a while back. But in terms of overall efficiency and standard performance, AMD’s EPYC lineup will dominate Intel in every benchmark.

So in apples to apple comparison, the AMD EPYC Milan CPUs will have a tremendously higher lead and we are just taking general performance without mentioning the better performance/value and perf per watt which would translate to lower TCO when building a Milan server.

The AMD EPYC Milan processors would succeed the current EPYC Rome lineup. The fundamental change for the EPYC Milan lineup would be the new Zen 3 core architecture which will be based upon an advanced 7nm process node. From what we know and what AMD has officially shown, the AMD Zen 3 based EPYC Milan processors would focus primarily on overall performance per watt enhancements but that doesn’t mean we won’t be looking at core updates.

The AMD EPYC Milan CPUs featuring the Zen 3 core architecture will not only feature a brand new chip architecture but also feature a 19% increase in IPC over Zen 2 processors and a 40% jump in performance per watt based on what we have seen on the consumer level chips. The higher single-core performance jump will put AMD on par with Intel’s next-generation Xeon CPUs while taking the multi-threaded lead even further.

In a previous slide, AMD showed their Zen 3 based 7nm processors offering better performance per watt than Intel’s 10nm Ice Lake-SP Xeon chips. As for the new features, other than featuring its Zen 3 core design, Milan would offer socket compatibility with SP3 platforms, would feature support for DDR4 memory, PCIe 4.0 interface, and is stated to offer 64 cores and 2x the threads (128 threads). The chips will have a TDP rated at 120-225W which is similar to existing Rome parts.

So summing everything up for EPYC Milan, we are looking at the following main features:

AMD has confirmed that their 3rd Gen EPYC Milan CPUs will be available this quarter in various SKUs and configurations. Some of these SKUs have already been leaked out by Twitter fellow, Patrick Schur and can be seen in the table below:

What you need to know on the markets this week: Biden’s spending plans, bitcoin’s blues and an unloved dollar vye with the first Fed meeting and a look at US GDP