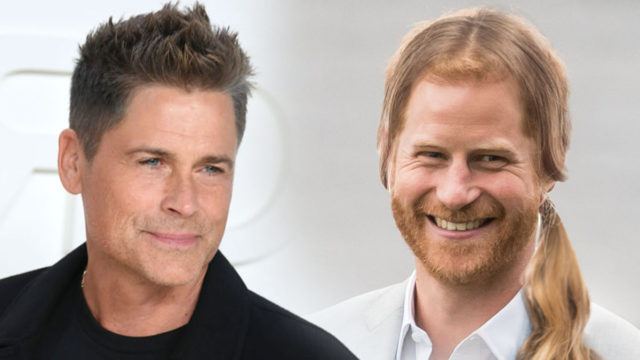 Prince Harry is getting into the laidback Californian lifestyle and has reportedly grown his red tresses into a ponytail, says actor Rob Lowe.

The 56-year-old, who lives nearby to the Duke and Duchess of Sussex’s multimillion-dollar Montecito mansion, claims he spotted the Prince driving around the neighbourhood.

Appearing on The Late Late Show With James Corden, Lowe said the sighting was akin to spotting the Loch Ness monster.

“I just ran into your countryman, the English treasure, Prince Harry, at the stoplight 10 minutes ago,” Lowe told Corden in a Zoom interview.

The Parks and Recreation star went on to reveal a “scoop” about the flame-haired Prince.

“It was very, very quick – don’t totally quote me on it – but it looked like he’s wearing a ponytail,” he said.

“I’m just saying, it looked to me as a casual observer that his hair had grown very long and was pulled back very tightly by what I can only assume was a ponytail.”

“Do you know what I think’s happened? I think you didn’t see Prince Harry.”

But if Lowe’s supposed sighting hasn’t got you convinced, don’t worry – he also went on a royal reconnaissance mission to confirm.

“Oh no, it was him because I have to say – I followed him to the house to see if the car went in,” Lowe admitted.

Prince Harry and Meghan Markle have lived somewhat reclusively with son Archie following their move to Santa Barbara in 2020.

Since he looks to be taking after Prince William’s thinning locks, the Duke of Sussex’s ability to grow a substantial ponytail might have to be seen first-hand to be believed.

The post Harry and Meghan’s neighbour Rob Lowe claims prince has a fresh new ’do appeared first on The New Daily.