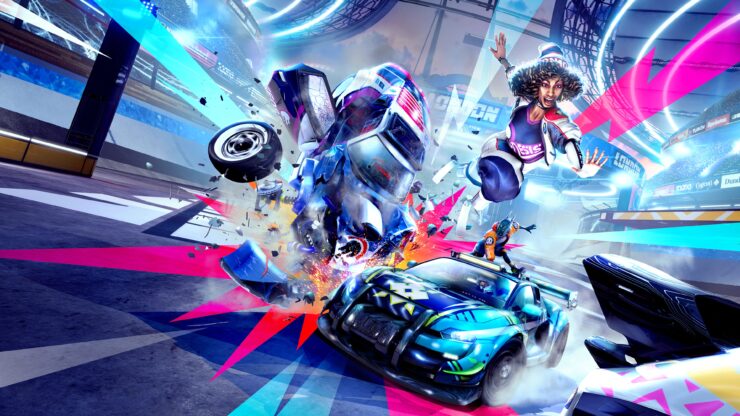 It’s always nice when you do well in a game. This is particularly true if you do well in an online game where you’re pitting your mettle against other living, breathing, creatures. It’s always up for debate if the person at the other side of the screen is a form of intelligent life, but let’s not get into the tragedy that is online gaming. Fortunately, while playing Destruction AllStars, I don’t really have to rely on the intelligence of those on the other side of the screen and, even when I do, I can wreck the hell out of cars for that cathartic rush.

Okay, maybe I don’t always get to wreck the hell out of some cars. That’s still very much dependant on your own skill level, also if the controls and physics are playing nice. Oh, and if you’re avoiding the part of the game that doesn’t’ seem to want you to have fun. 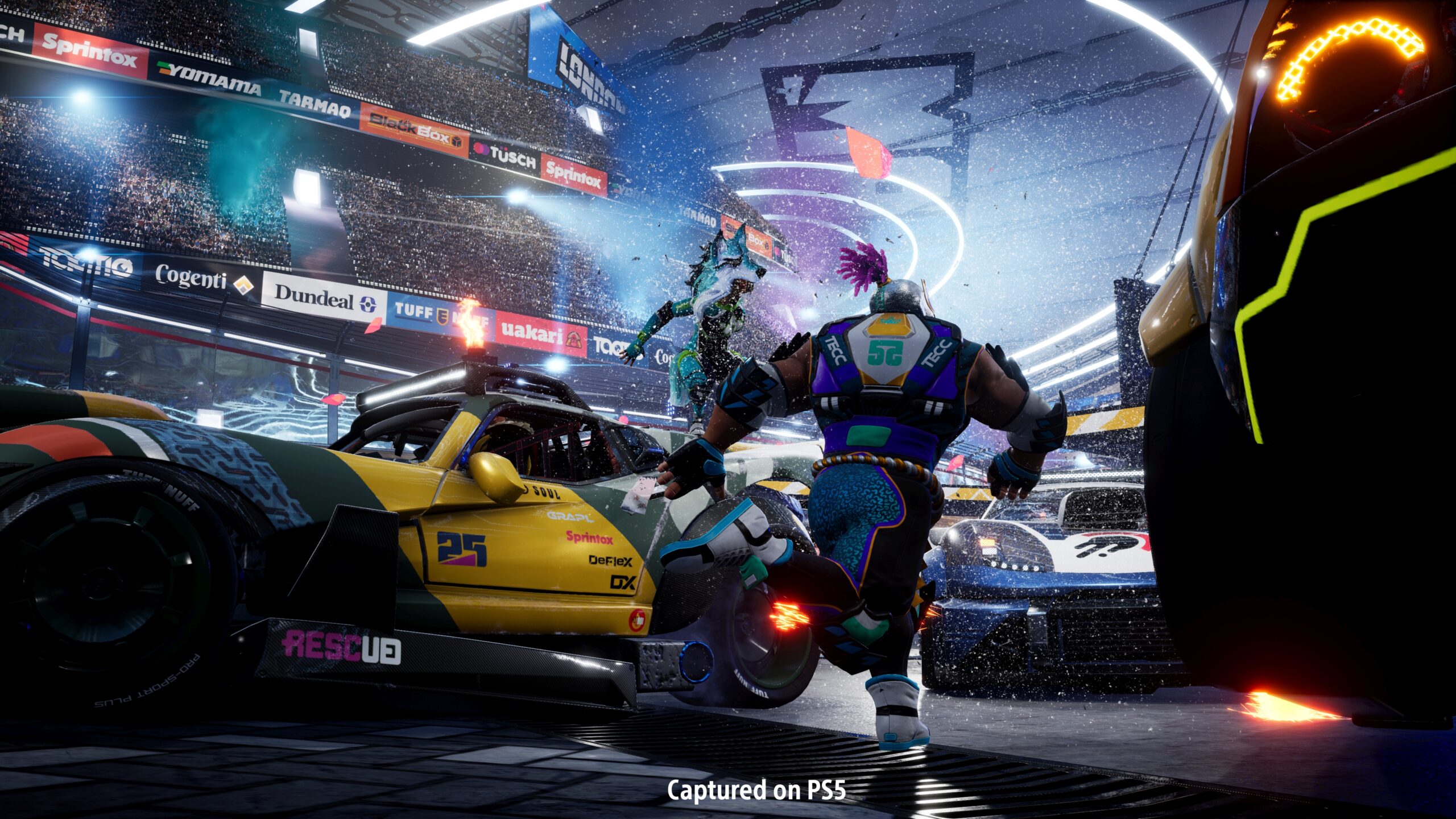 At least that’s how it feels to me. Before I get into that, let’s talk about the game. What is Destruction AllStars? I mean, the name and trailers pretty much give it away. It’s a mixture between Destruction Derby, Rocket League and Overwatch, or any of the many hero-shooters out there. You’re either in a vehicle, smashing up any other vehicle on the course or, in the case of team games, the opposition vehicles. Or you’re running over those who are not in vehicles, don’t forget that. Or you’re on foot trying not to get run over, finding an empty vehicle or trying to commandeer one currently being used.

You would think that this both being in or not in a car would make Destruction AllStars something special, the two parts working together to offer that bit extra. The truth is that it doesn’t. At least not yet. Maybe I haven’t quite grasped the rules, but for some reason, I can’t always attempt to hijack a car. I know I’m in range, I could spit on them for being in the form of automotive transport if the game had that option. As for the rest of the being on-foot, you can dodge getting run over, get run over, or collect shards that help you build up to your special vehicle but don’t help increase your score, so this isn’t the way to play.

When you’re on foot, there is a ‘breaker’ feature, which gives your character a faster run-speed, double jump, and a unique ability. This is useful and charges up reasonably quickly, so that’s a positive. The main use is to make it easier for you to get to, you guessed it, another vehicle. That alone makes it so the speed boost and double jump are useful, though I should tell you another problem with being on foot is that it just feels rubbish.

The movement is floaty and a little imprecise. This is more noticeable when jumping, which is unsatisfying and results in a far too low jump for even the low platforms the cars are on. You jump up, grip the edge, slowly climb up and jump in the car. That’s if you didn’t manage to press the get-in-the-car button at the peak of your jump. Another aspect is the wall-running, where the imprecise movement will leave you running the wrong direction as many times as you would in the right one. Putting it simply, put me behind the wheel. Now. 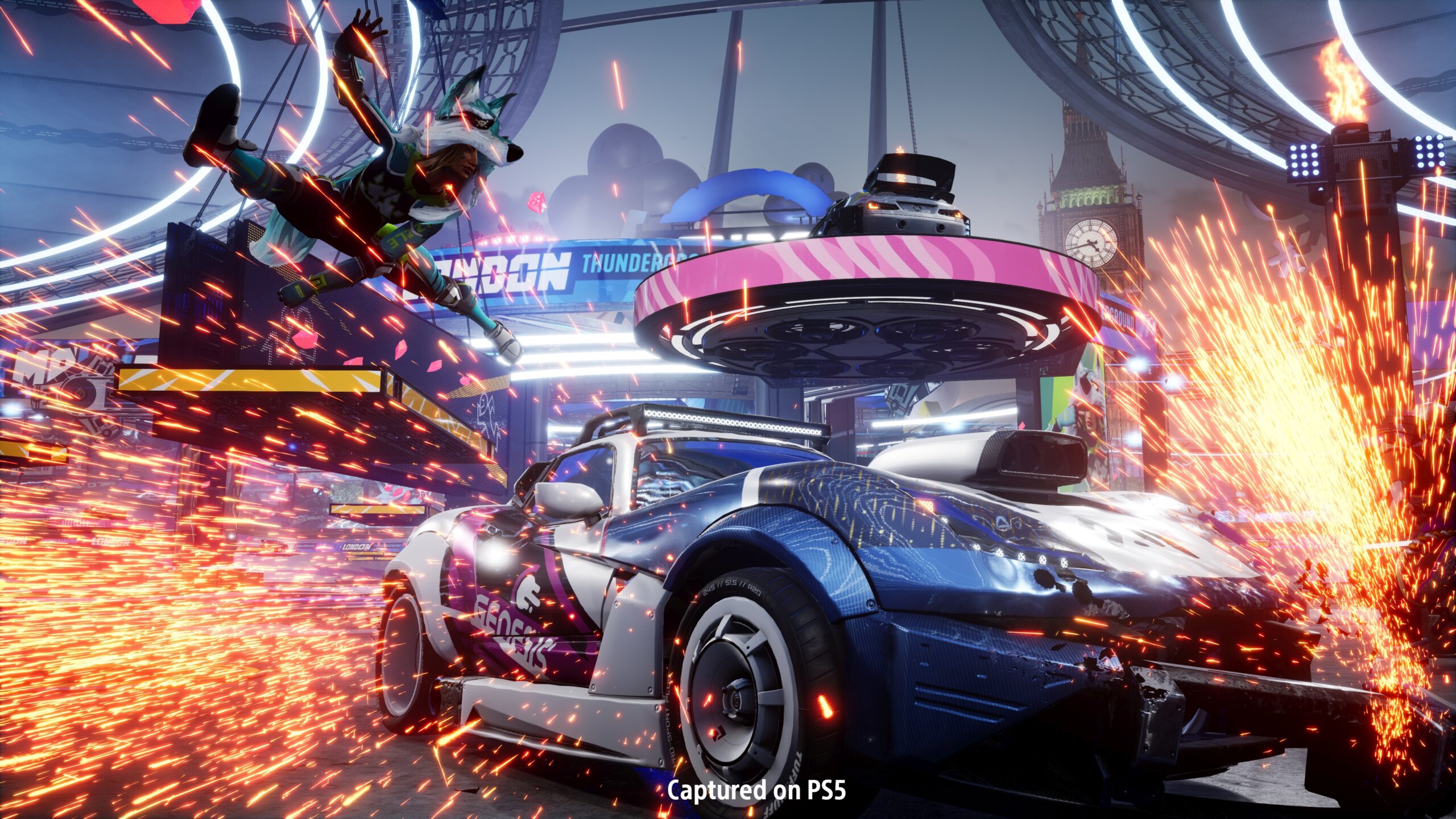 What about when I get behind the wheel? Yeah, it’s okay. Alright, it’s genuinely fun. You can tell the influence of games like Rocket League. Everything here is fast, letting you zip around arenas – ones that sadly don’t let you drive on a roof – with a rechargeable boost that lets you zip forward or to the side. If you do this and smash into somebody, you’ll be immune to that damage and this boost will recharge quicker than if you hit nobody. Also, it looks good.

This isn’t a game where you’re going to see parts flying off the car. You could be down to your last nanometre of health, the car will look banged up, there’ll be parts rattling, and you’ll even find it more difficult to control, but it remains intact. Still, when a car goes, there is a satisfying explosion. It’s also a great feeling when you fly through one wreckage you’ve just created, to smash into another car and wreck that driver’s dream of being successful.

The more you wreck, the more the bar fills up to give you the special vehicle. Each character has their own with its own unique ability. My favourite so far is that of – I can’t remember the character’s name, let’s call him King. So, King’s vehicle’s special ability is a shredder on the front of the car. You activate that and run head-on into something, that vehicle isn’t going to last long. There are other abilities I like, but that’s the best.

It all fits together quite well. The arenas are large, with a very bombastic and colourful background of some real place. It adds to the theatrics of the game, which certainly plays in its favour. Hell, each game is introduced by Bruce Buffer. I didn’t even have to look that up; his voice is that distinctive. You get a slight description of the style of game you’re playing too, but let’s be honest, they all revolve around “SMASH THE CAR UP”.

I genuinely mean that. There are four modes, and I don’t really know any more about them than smashing cars. Two are 8v8 team modes, these being Carnado and Stockpile. Carnado is just a team deathmatch from what I can gather, but there’s a Tornado mixed in there somewhere. Stockpile is about picking up bolts either from opposition damaged cars, or your own teams damaged cars, then you deposit them at some platforms. Honestly, neither are exactly explained well. I just ram the cars. The other modes are easier to understand; it’s you vs everybody. Mayhem is just destruction derby, the most points wins. Gridfall just has a floor that falls away, and the last car standing is the winner. 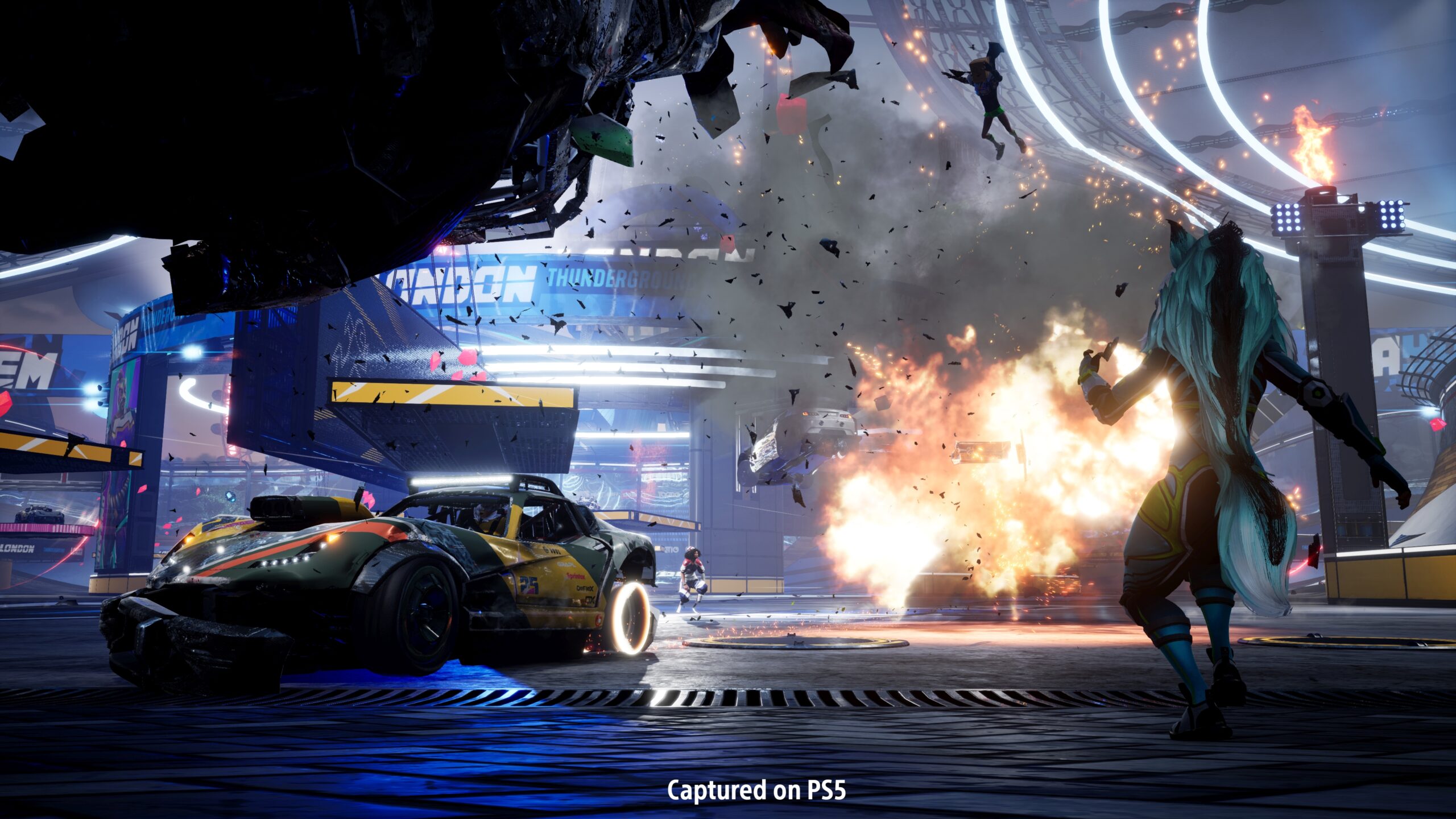 You may have noticed that I didn’t remember my favourite characters name not too long ago. That’s for a good reason. The characters mean absolutely nothing. Sure, they’re distinctive looking, but there’s no story behind them – at least none that I care to delve into side screens to find out. They certainly have personality, them all well designed and animated to show off a level of personality. Harmony is one of my favourites for that, though that could be because she reminds me of the Geraldine Granger, personality-wise. Look, I did remember a character.

In reality, there’s nothing – a few lines of a blurb, nothing memorable. There’s nothing even memorable in any of the characters in a Tracer’s arse sort of way. This isn’t to say that games like Overwatch did characters better, story-wise. I don’t remember them either. A game like this is perfect for creating a small sequence of events for each character, strung together in a story. For example, King could hate Harmony because she wrecked his favourite car last season. He’s got a new car now, and he’s here to shred. He’s got to go through three events before reaching the final and face off against Harmony to win the title and get revenge for his last car.

Sure, it’s not exactly a grand story, but it’s something. Speaking of something, this game was going to cost something, originally. This was going to be the PS5’s Knack, the paid-for brand new launch title. Now having been released as a PlayStation Plus free game following a slight delay, the question is how they’re going to monetise it. From what I can see, it’s down to a cosmetic market.

When you level up, you get 1000 of the in-game currency, AllStars Credits (i think). Some items only require this currency, with other fancier cosmetics requiring the paid-for Destruction Points. These cosmetics also extend to your profile, with banners and avatars being made available. I would tell you exactly how many items you can buy for characters, vehicles, and your profile, but I lost count after about twelve billion. Honestly, I don’t mind. It’s a cosmetic market in a (if you don’t count the PS+ subscription) free-to-play game. 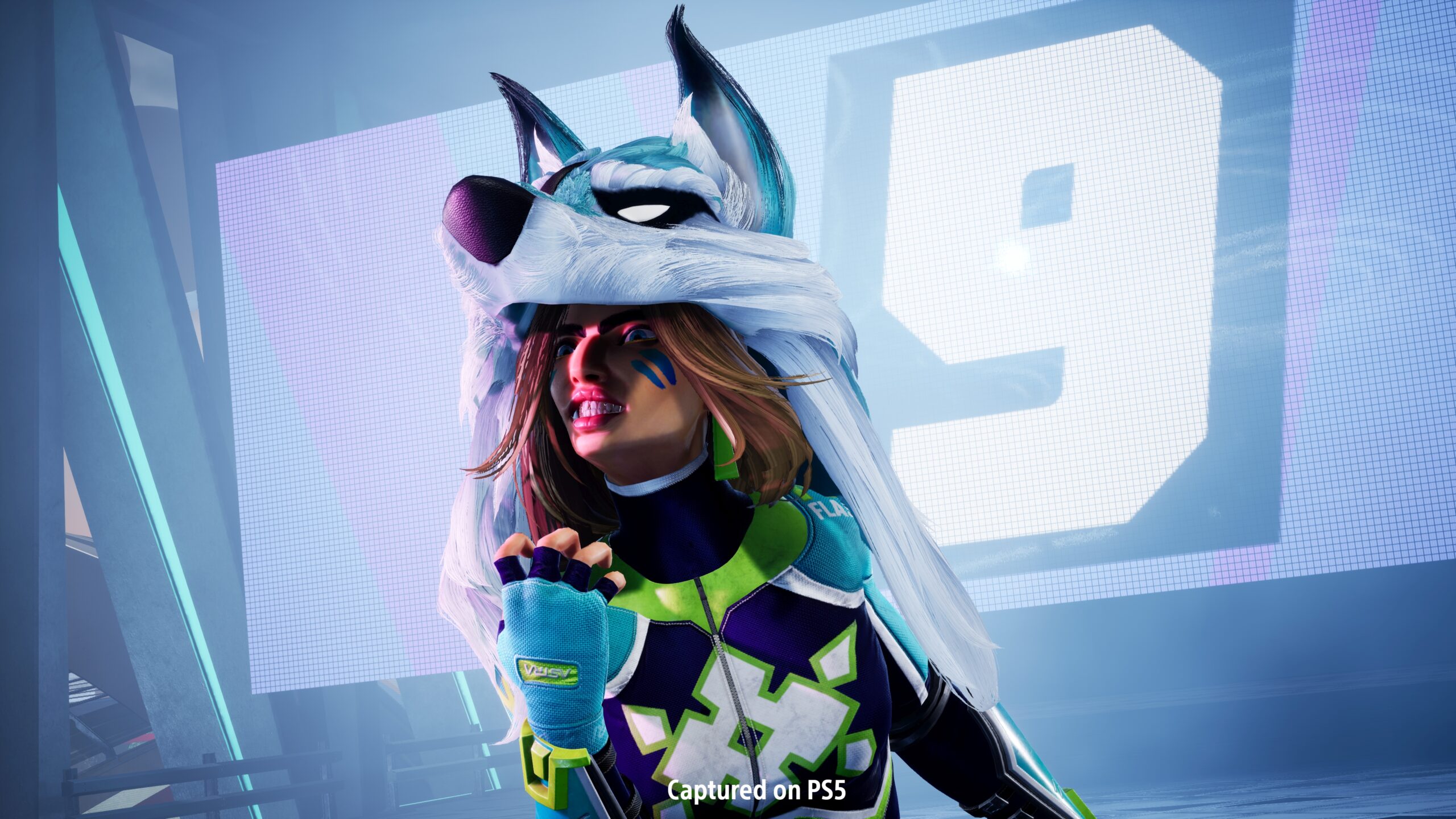 Now, let’s talk about one last thing. It’s a small thing, but one that needs to be mentioned. At the start of this review, I briefly hinted upon the tragedy that is online gaming. Somebody really didn’t get that message to Lucid Games when they were developing Destruction AllStars. Why? Well, whenever you jump in a lobby, voice chat is automatically enabled. Honestly, I don’t want to be listening to obnoxious gits coming from my controllers’ speaker. The only obnoxious git I want to be listening to is me, on our sublime podcast.

Edit: It seems that after my writing this review but just prior to it going live, Sony has patched out the voice chat issue. I’m keeping the paragraph in.

So anyway, what do I think about Destruction AllStars? It’s alright. It’s fun enough when you’re smashing cars together like a toddler actively trying to annoy everybody else in the house and leave as many trip hazards as possible or pointy bits to stick in peoples feet. They need to do something to the non-vehicular part of the game, preferably use some napalm. Also, give people a little more variety in modes. Maybe a few new arenas too because the game genuinely looks great throughout and I’d like to see more of it.

Copy purchased/obtained as part of my PlayStation Plus subscription.