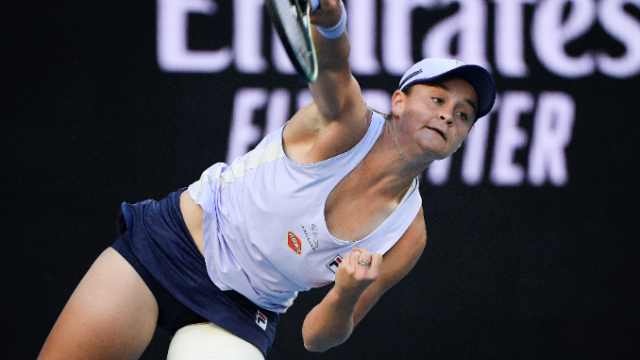 Ash Barty’s tilt at becoming the first Australian since 1978 to win the women’s singles championship at their home major has gained momentum courtesy of a straight-sets defeat of Ekaterina Alexandrova.

Barty, again wearing a bandage and tape on her left thigh, was down a service break in both sets but recovered each time on her way to recording a 6-2, 6-4 over the Russian 29th seed in an almost empty Margaret Court Arena.

The world number one will meet either Anett Kontaveit or Shelby Rogers in the fourth round.

The world number one will next meet unseeded American Shelby Rogers in the fourth round.

No doubt speculation will build on whether Barty can become the first Australian to lift the Daphne Akhurst Memorial Cup since Chris O’Neil did so 43 years ago.

But Barty has made it clear in her media appearances so far this Australian Open that she does not listen to any outside noise.

Barty has also played down concerns she is carrying a thigh injury, despite wearing heavy bandaging in her past two singles matches.

But concerns she is managing more than just general soreness grew when she withdrew from a doubles match on Friday.

Her movement did not appear restricted against Alexandrova and if she recovers well following Saturday night’s victory, she will be heavily favoured to beat Rogers and advance to the quarter-finals for a third consecutive year.

Barty normally walks out to wild applause from her home crowd at the Australian Open but tonight it was a different story.

She was greeted by a virtually empty Margaret Court Arena, with spectators not allowed to attend Melbourne Park because of Victoria’s five-day coronavirus lockdown.

With only members of her support staff in the stands, Barty made a shaky start when she was immediately broken by Alexandrova.

A double fault ended Barty’s first service game and Alexandrova then held for a 2-0 lead, although she had to survive three break points to do so.

Barty was not rattled, however, and she soon settled into her groove. The 2019 French Open champion won her next service game and broke Alexandrova to level at 2-2.
Ash Barty stretches for a forehand against Ekaterina Alexandrova.
Barty was again wearing strapping on her left thigh.(AAP: Dave Hunt)

Another two breaks of the Alexandrova serve helped Barty finish off the set, having won six consecutive games in the process.

Alexandrova racked up 16 unforced errors in the first set but she still had her moments, with a cracking forehand on a service return in the seventh game making her highlight reel.

A nifty backhand drop shot in the fifth game of the second set gave her a service break, which she consolidated to jump out to a 4-2 lead.

Games were soon back on serve though, as Barty held and then broke Alexandrova to level at 4-4.

A fifth service break for the match saw Barty complete her assignment on the back of winning four straight games, with a superb forehand winner icing the victory.

The post Australian Open: Ash Barty defeats Alexandrova and powers into fourth round appeared first on The New Daily.