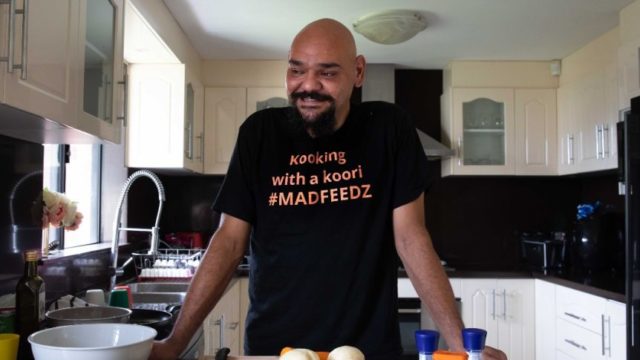 Nathan Lyons never thought he would be TikTok famous.

But when he began to upload short videos of himself sharing some of his favourite home recipes, that’s exactly what happened.

The 35-year-old father-of-six from Penrith in Western Sydney looks like any regular dad, and works long hours as a transport worker.

“Never in my wildest dreams when I made my bully beef did I think that I would have nearly 100,000 people following, not even six months later,” he said.

But his Kooking with a Koori videos of cheap and easy meal ideas have resonated with tens-of-thousands of people.

Nathan believes the appeal of his videos is their relatability – each comes with its own creativity, injection of humour and unrefined style.

“I use plastic plates, I use the pots from Kmart … my meals don’t look like the professional chefs,” he said.

“I think that’s why it’s blown up, because I use the stuff that they use at home.”

Nathan began uploading the videos while whipping up meals for his wife and children, using the social media platform to show others how to feed their families on a tight budget.

He says it’s easy to buy “battered sav and chips for the kids” from the local takeaway, but says for the same price “you can go down to Coles or Woolies, have the produce, have the meal for that night then have leftovers for the next day”.

“I want to inspire our mob to get back into the kitchen – with COVID-19, our families are doing it tough,” he said.

“I’ve been feeding this mob with dinner for $8, it’s just making that dollar stretch.”

It’s a skill the Wiradjuri man learnt growing up in a single-parent, housing commission home with his siblings in inner-Sydney.

“We had to learn to make money stretch … Black and Gold products, that sort of stuff,” he said.

His cooking is a mix of traditional curries and pastas, which he says are interchangeable to suit the most stubborn of eaters, like his “devon snack pack” – a combination of devon, hot chips and sauce.

Devon and Keen’s Curry Powder are regulars in his recipes, ingredients he says you’ll find in the kitchens of most Aboriginal homes.

They’re recipes that hark back to a childhood filled with food and music.

“A bit of Charley Pride, a bit of Alan Jackson, that’s what I listen to, so on a weekend at my Aunty’s house having Weet-Bix with powdered milk and listening to Charley Pride… that brings back those memories,” he said.

He hopes to capture these memories in his latest venture, a new cookbook which he says will be filled with “Indigenous soul food”.

But the thought of a published book is something that’s still sinking in.

“I barely passed English in high school and yet here we are. It’s just mind-blowing.

As Nathan and his family still come to terms with his new-found fame, his message is clear.

“I want to spread happiness to my community, and I want to inspire them to get back into the kitchen and make their own mad feeds.