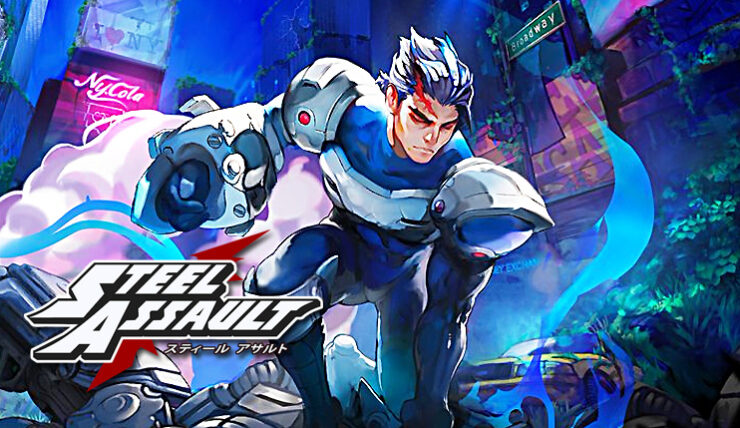 2021 looks like it’s going to be great year for thumb-spraining old-school 2D action games. We’ve already got a couple good ones in Cyber Shadow and 30XX, with many more to come, including the long-in-development Steel Assault. For those unfamiliar, Steel Assault is a fast-paced, boss-packed linear action game in which you fight across a dystopian robot-filled wasteland using a badass energy whip and zipline. Originally Kickstarted back in 2015, Steel Assault has gone through a number of changes in the years since, but the game recently dropped a promising new demo as part of the Steam Spring Game Festival, and it seems like a 2021 release through Montreal-based indie publisher Tribute Games is in the cards.

I recently got a chance to chat with Steel Assault creator Sri Kankanahalli about his game’s influences, difficulty, length, and surprisingly-prescient story, amongst other topics. Steel yourself, and scroll on down for the full interview… 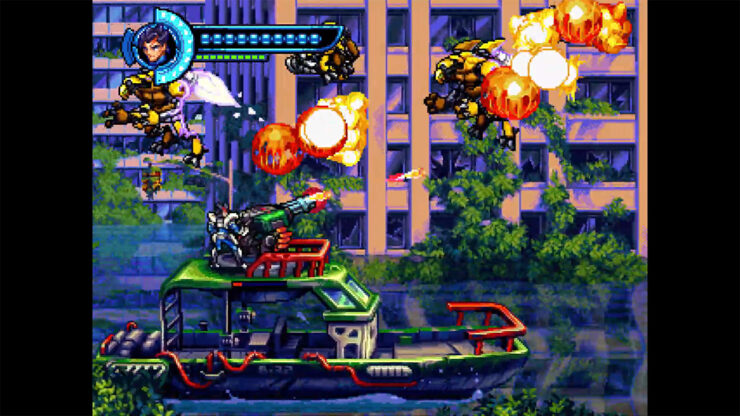 What games inspired Steel Assault? I think a lot people will immediately jump to Bionic Commando due to the zipline/grappling hook, but there’s a lot of Castlevania and Mega Man in there too, particularly Mega Man Zero. In terms of movement, I’d say there’s also a touch of classic Sunsoft games, like Batman on NES. Any obvious influences I’m missing?

Steel Assault is a kind of amalgamation of many different 16-bit titles, and it seems like every person who plays it sees a different inspiration. Taro’s 8-way electric whip is of course inspired by Castlevania, and his slide move by Contra: Hard Corps, but his double jump is our own addition as is his zipline, which was an idea from our original artist Daniel Garcia. Meanwhile, some of the bosses and set pieces take cues from Treasure and Konami’s Genesis/Megadrive output. As for the game’s setting, it wasn’t inspired by any specific games as much as post-apocalyptic movies such as “I Am Legend” or “Children of Men”, although we referenced concept art from “The Last of Us” at certain points (a game which I still need to play!)

The Kickstarter campaign for Steel Assault said you’d be aiming for a late-NES-inspired visual style, but the recently-released demo looks rather different. I’d say it looks like a GBA title more than anything. It’s my understanding that a lot of the original Steel Assault art was reused for the recent Yacht-Club-published game Cyber Shadow. Why the change?

The late-NES thing didn’t survive very long past the Kickstarter (5-6 years ago). We lost our love for it, basically. There was some outrage when we announced the shift, but I think the Kickstarter backers are very happy in the end. Some of the original doubters even told me that it ended up being the best campaign they ever participated in. The 8-bit fans got two free games in an art style similar to what they wanted: Panzer Paladin and Cyber Shadow, the latter of which uses some of the OG Steel Assault assets. I think both of those games are higher quality than what our original pitch promised, and on top of that, the backers also get the final version of Steel Assault.

In terms of art style, due to budgetary limitations (and our early inexperience) the game’s style has had to kind of evolve organically based on the artists we were able to get on board over the years, rather than by imposing the game’s style completely from top-down. Many of the artists had previously worked on GBA and DS games, for example WayForward’s titles, so that’s probably why you see the resemblance. If we can gather the resources, for the next game I would like hire a few full-time artists and musicians to define these things at the very beginning of the process. 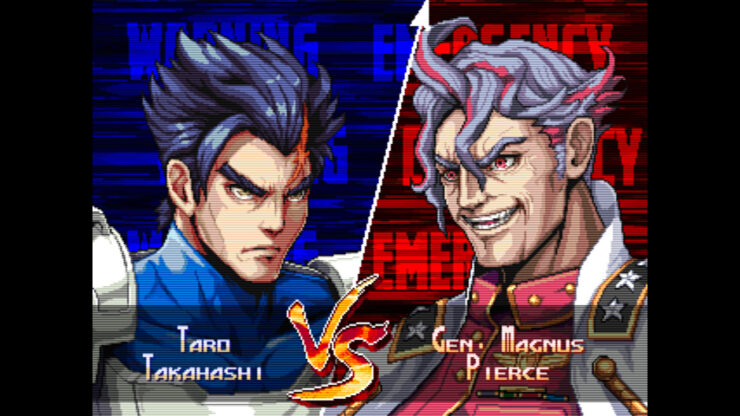 Speaking of changes, the story you hinted at during the Kickstarter campaign was rather pointed stuff. Protests turning violent, a tyrant aiming to seize power with promises to Make America Great Again (so to speak), etc. It only feels more relevant 4 years later. Are you keeping the same focus with the story?

This is an arcade side-scrolling action game, so telling a nuanced story isn’t our highest priority (and can’t be, really). But yes, the broad strokes of the game’s story have barely changed since the Kickstarter in 2015, although some details have.

I wouldn’t focus too much on relating our game to the current political climate; any similarities are incidental, not ideological. But it’s been funny seeing certain elements kind of become reality. I remember during the start of the coronavirus crisis last April, I was walking through Times Square on a Sunday afternoon, and it was completely empty. Not one person around for miles, but the billboards were still flashing, and they were running ads for films that had come out almost a year ago (at that time) or for stores which you could no longer visit. I thought, all you would need to do is add some overgrowth here, some vines over there, and you’d have a stage for Steel Assault. And then I took a bunch of photos for the artists, although I don’t know how well they translated. You can see that experience in a kind of bastardized form, when you play the second section of the recent demo.

Obviously Steel Assault aims to deliver an old-school experience, but what changes, big and small, have you made to accommodate more modern tastes? Checkpoints are pretty generous, for instance.

I think you must have played on the normal mode, since the arcade mode has no checkpoints.

Ah, okay, I wasn’t sure which mode was harder. Probably for the best I went for Normal. I’ll admit, I died a time or two (or a dozen).

That’s our approach for accommodating modern tastes: difficulty modes. It’s the least time-consuming way to do this, and also the best way, in my view. Arcade mode will be based around the idea of a “one-credit clear” (1CC), of course. But lower difficulty modes will add more checkpoints (as you noted), and they’ll also reduce timing on enemy spawns, simplify or remove certain bullet patterns, and so on. 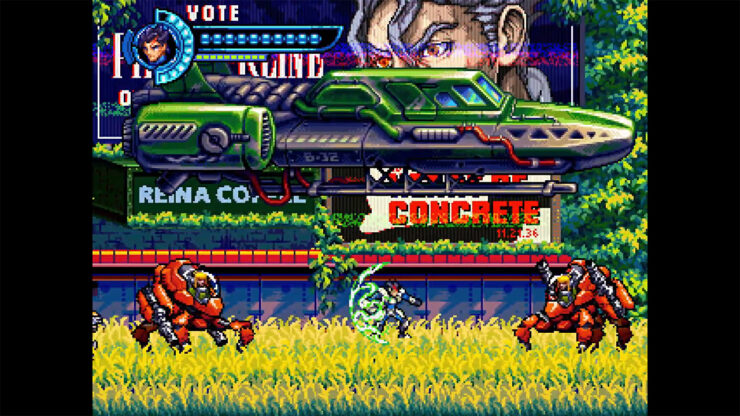 The Steel Assault demo is only about 10 minutes long, but it throws a lot of different modes of play at you. A boat chase, a scene where you’re dangling off a helicopter, multiple boss fights. Can we expect the whole game to be as varied?

All of the stages have around this level of variety, yes. That’s something I really wanted to focus on: the player should be facing something a little bit different each minute they play the game. And each level has multiple bosses or mini-bosses sandwiched in-between the stage action, just like in the demo.

What are some of your favorite set pieces you’re working on?

One of my favorite set-pieces is something that we’re currently working on, near the very end of the game. But I’ll say no more…

What’s the overall scope of the game? How many stages can we expect?

Well, I don’t want to spoil the number of stages, but the game is roughly the length of an average arcade side-scroller from the ‘90s, perhaps a bit longer. It’s comparable in length (if not quite in beauty) to a game like one of the 16-bit Contras, or perhaps Metal Slug.

Is Steel Assault being made with speedrunning and streaming in mind? I was somewhat surprised the game doesn’t have a combo or scoring system.

It isn’t, really. There’s plenty of room for players to dominate the game’s stages (what one of my friends calls “authoritative play”), and speedrunners will probably bend over backwards to break our game in all sorts of ways we could have never imagined – but speedrunning is not something that we’re actively designing around. Regarding scoring, personally speaking, I didn’t feel a score system was necessary. In my view, most side-scrollers implement scoring solely as a matter of tradition. You can tell by how little the games do with it, even the arcade side-scrollers (compared to STGs, where many games make you do differential calculus while dodging, if you want to maximize your score). Maybe Metal Slug came closest to doing something interesting, with the knife mechanic and the hidden POWs, but you would want to knife enemies up close and rescue all of the prisoners even if it didn’t impact the score, right? And even if the POWs didn’t give you powerups, which some of them do.

We actually prototyped a combo system way back when, but we couldn’t seem to make it flow naturally. At any rate, this is an idea to potentially explore in our next game in some form. 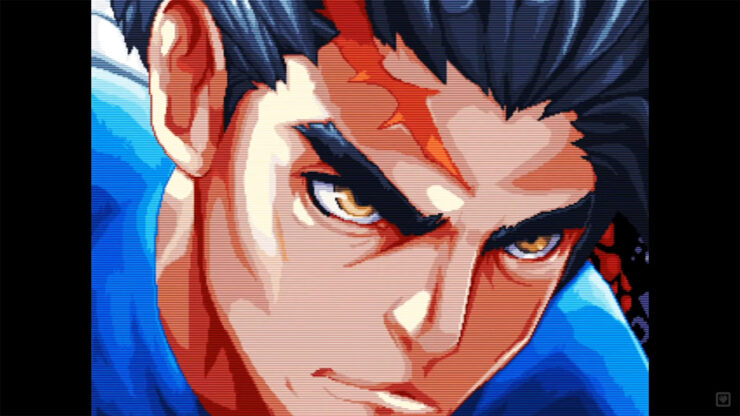 These kind of old-school action titles are often better with a friend. Any thoughts about including co-op in the game?

I would love to for our next title, but at this point co-op would mean rewriting half of the game’s code from scratch. It’s not a small addition by any means, in terms of both programming and design.

Understandable. Thanks for your time!

No problem, man! It’s been great talking to you as well.

Steel Assault is scheduled to hit PC (via Steam) sometime in 2021. When I asked about other platforms, publisher Tribute Games told me that “other platforms have yet to be announced,” but that they’d “love to make Steel Assault available for console players as well.” So, hopefully that happens eventually.