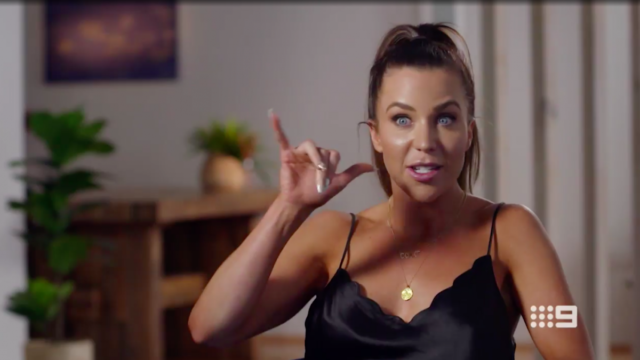 It’s one of the most controversial shows on television: Married at First Sight is back with a group of hopeful newlyweds, and there’s already a hefty bouquet of gossip.

Your favourite experts John Aiken and Mel Schilling are back too, albeit without Trisha Stratford, who has been replaced by Melania Trump lookalike, Alessandra Rampolla.

A reality TV gig would be a welcome return to normality for Ms Trump, who has been reportedly looking for work since she was booted from the White House in January.

The premiere of the season introduces us to our new couples (read: the next generation of Instagram influencers), and allows us to get a feel for who they are and why they needed to go on TV to find love.

We meet the newbies as they get together for drinks on their last night of singledom.

Disappointingly, the cast is about as diverse as you’d expect (after Tash and Amanda’s disastrous season, they have opted to stick to heterosexual couples).

But the producers have done an excellent job of letting us know straight away who to watch this season.

There’s Brett, the resident hipster with a heart of gold, cat-lady-in-training Belinda, and 39-year-old Beth, whose heart is set on procreating.

Russell doesn’t get much airtime in the first episode, but has been included in this recap because we need to address his striking resemblance to a certain Victorian Premier.

We meet adorable Patrick, 27, who is so nervous in the car ride to the bucks’ night that his voice reaches an octave that only dogs can hear.

Then we have Coco, the loud, fun and energetic pilates instructor who is full of snappy one-liners and for that alone, she is unfortunately fated to be this season’s villain.

The tarot-reading and sometimes psychic is set to be polarising, so those not interested in “riding the Coco wave” should jump off now.

Already, the other future wives are terrified of her, and mutter between themselves that Coco “might steal our husbands”.

Insecurity has taken up permanent residence in this season’s landscape.

The indiscretion? Coco has (rightfully) pointed out that there may have been something a little off (read: very off and very creepy) about Samantha dating and having children with a 33-year-old man while she was still 17.

The Coco and Samantha dispute has all the makings of a Bette Davis and Joan Crawford-level rivalry, and we are here for every exciting second.

Tying the knot on the spot

With that, we meet painfully shy, flighty and scared-of-her-own-shadow Melissa.

Melissa, 31, has been single since she was 19, has never been on a date and has crippling social anxiety.

Naturally, putting her on the most scrutinised show on Australian television was a good call.

Melissa, who is smart, successful and beautiful, suffers from extremely low self-esteem.

The judges want to pair her with someone who will get her out of her shell.

But Melissa doesn’t need a husband, she needs a good psychologist.

She has been paired with Bryce, a confident radio host who has an alarming secret that he seems to be downplaying.

We find out that, up until six months ago, Bryce was engaged to his long-term girlfriend.

Is anyone else doing the maths on when the MAFS casting call went out?

The next couple to walk down the aisle is ex-AFL player Jake and self-proclaimed “sasshole”, Rebecca.

Right away, we can tell these two are a bad match.

Jake, whose dark history with depression led him to run an organisation for mental health in sports, didn’t think it was appropriate to wear a tie on his wedding day.

Rebecca is a business manager who knows what she wants – and she wants a groom wearing a tie, goddamn it!

Known among her friends as being notoriously picky and critical, we don’t have to wait long for Rebecca to show us her true colours.

“He’s looking at me like I’m sex on a stick,” she said of their first meeting.

But she doesn’t yet know that he was drafted to the AFL, where womanising is par for the course.

Rebecca is fuming that she has been paired with a tie-less man, who bites his fingernails and has “bad teeth”.

The snarky comments, prolonged silences and icy disposition have alerted Rebecca’s maid of honour to her ill feelings towards Jake.

But following a quick woman-to-woman pep-talk and probably a few kicks under the table, Rebecca has decided to give her new husband another chance.

Just a few short hours into their marriage, Rebecca proudly announces to the camera that she and Jake have “turned a corner”.

After all, she has already come too far to leave without her Instagram followers.

The post <I>Married at First Sight</I> recap: It’s Coco’s world and we’re all just living in it appeared first on The New Daily.