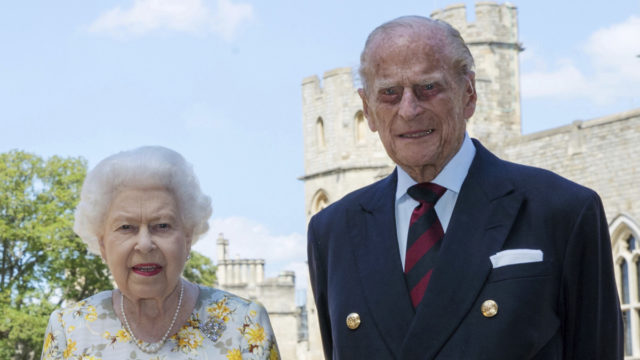 Prince William has given a brief update on the ailing Prince Philip as a royal TV showdown looms between the Queen and the wayward Sussexes.

William said his 99-year-old grandfather is “OK” after spending a sixth night in hospital.

Philip, the Duke of Edinburgh, was admitted to hospital last week as a precautionary measure after feeling ill with an ailment that was not reportedly related to COVID-19.

“Yes, he’s OK, they’re keeping an eye on him,” William said on a visit to a vaccination centre in eastern England.

Royal reporters said he delivered his message with a wink.

The brief update came amid news that Queen Elizabeth and other senior British royals will appear in a television program to air the same day as Oprah Winfrey’s interview with Prince Harry and wife Meghan.

The royal family traditionally attended an annual Commonwealth Day service at London’s Westminster Abbey in March, but the event was cancelled this year because of the COVID-19 pandemic.

Instead, the 94-year-old Queen will deliver a televised message as part of a program entitled A Celebration for Commonwealth Day, which will be broadcast on the BBC on March 7, the Abbey said.

There will also be contributions from Prince Charles and Prince William, with his wife Kate.

The program is due to air just hours before Harry and Meghan’s much-anticipated tell-all with Winfrey, their first in-depth interview since they moved to the US.

Winfrey’s scoop comes at a time when the couple has been making international headlines with the announcement they are expecting a second child and news they are quitting their royal roles for good.

Harry and Meghan attended the Commonwealth Day service in person last year. It was their final official royal engagement before they moved to Los Angeles and stepped away from official duties, a decision that sent shockwaves through the monarchy.

Last week, Buckingham Palace announced the couple would not be returning and their treasured royal patronages would revert to the Queen and be distributed among other family members.

“We are so pleased that this rich and vibrant BBC program with the Royal Family and the Abbey at its heart will celebrate our global connections at a time when we are all so physically isolated,” he said.

Philip was admitted to the private King Edward VII’s Hospital in central London after feeling unwell for a short period, Buckingham Palace said, and was kept in over the weekend for further observation.

A royal source said doctors had been acting out of an abundance of caution and that Philip was in good spirits.

Prince Charles paid Philip a brief visit on Saturday, although there has been no official update on his condition since last week.

Philip, who retired from official engagements in 2017, spent four nights at the same hospital at the end of 2019 while being treated for a pre-existing condition.