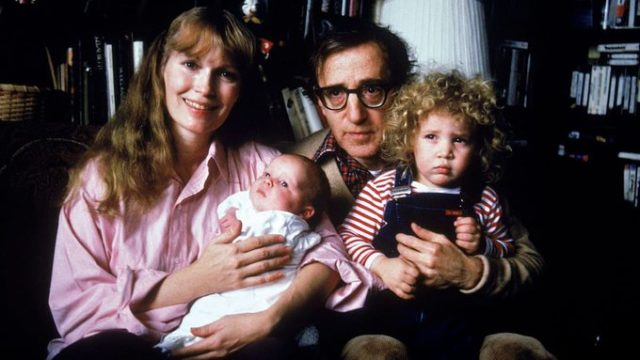 Painting a grim picture of what its creators call a “family psychological horror”, the premiere documents the bitter custody battle between Allen and ex-wife Mia Farrow.

It also explores allegations that Allen sexually assaulted seven-year-old Dylan in 1992, amid the discovery he was involved in a consensual sexual relationship with Mia’s 20-year-old daughter, Soon-Yi Previn, whom he helped raise.

Kirby Dick, Amy Ziering and Amy Herdy, who joined forces on Allen v Farrow, included interviews with Mia, Dylan and Ronan Farrow, Mia’s other children, Fletcher and Daisy Previn, as well as their friends and family.

“To see the perspective of a child and a partner when it’s slowly dawning on them that something is not right with a person that is deep inside the family is really a family psychological horror story that I think is extremely cinematic, and gives you a perspective into what many people in families where incest is happening.”

Episode one focuses on some of the concerning behaviours that witnesses inside and outside the family claim they saw Allen engaging in with his young daughter.

This includes a number of alleged incidents in which Allen made Dylan lay in bed with him while he was only wearing underwear – occurrences that were walked in on by Mia and family friend, Priscilla Gilman.

Anything funny Woody Allen said isn’t funny anymore. All I can remember now is Mariel Hemingway, 17, playing his girlfriend when he was 44 in Manhattan — a celebrated film… The debate between the artist and their art is over. #AllenVFarrow pic.twitter.com/2vlzoOCUZ3

It is also alleged that Allen would force or encourage Dylan to suck his thumb, which Ziering suggests may go innocently unnoticed, but can be a textbook sign of grooming.

“We talked to some experts as we were doing our research, and they were saying those are classic grooming patterns,” Ziering said.

It’s this behaviour that right at first seems unseemly maybe, but maybe OK. But if you’re not an expert in this arena, you don’t know how to recognise it.

“And the transgressions are subtle, and they happen incrementally, which you see in episode one – [Dylan] sucking [Allen’s] thumb.

“It’s these slight transgressions – of personal space, of appropriate behaviour – that you normalise the child to.”

Another concerning revelation is that Dylan disclosed to a psychologist that she had a “secret”.

One of the documentarians, Amy Herdy, explained that signs of childhood sexual trauma were often missed in the early 1990s as there was limited information about its psychological effects.

“It’s revealed in episode one that Dylan was put into therapy when she was five for being shy and sad and withdrawn. Which we know now in 2021 are classic symptoms that something is going on with that child that’s very, very wrong,” Herdy said.

“They didn’t recognise it back then.”

Allen and Soon-Yi Previn released a statement of their own to The Hollywood Reporter in response to the documentary.

The controversial couple – who share a 35-year age difference – declined to be involved in the series, but have now hit back, claiming it is one-sided.

“These documentarians had no interest in the truth,” the statement read.

“Instead, they spent years surreptitiously collaborating with the Farrows and their enablers to put together a hatchet job riddled with falsehoods.

“Woody and Soon-Yi were approached less than two months ago and given only a matter of days ‘to respond’. Of course, they declined to do so.”

The statement goes on to allege Dylan Farrow was ‘brainwashed’ by Mia into believing she was abused, in an attempt to spite Allen over his affair with Previn.

“What I don’t understand is how is this crazy story of me being brainwashed and coached more believable than what I’m saying about being sexually assaulted by my father?” — @realdylanfarrow #FarrowThisMorning pic.twitter.com/eNbQyXOVv1

“As has been known for decades, these allegations are categorically false. Multiple agencies investigated them at the time and found that, whatever Dylan Farrow may have been led to believe, absolutely no abuse had ever taken place,” the statement continued.

“It is sadly unsurprising that the network to air this is HBO, which has a standing production deal and business relationship with Ronan Farrow.

“While this shoddy hit piece may gain attention, it does not change the facts.”

Episode one of Allen v Farrow is available on Binge, with episode two dropping on February 28.

If you or someone you know needs help, contact: