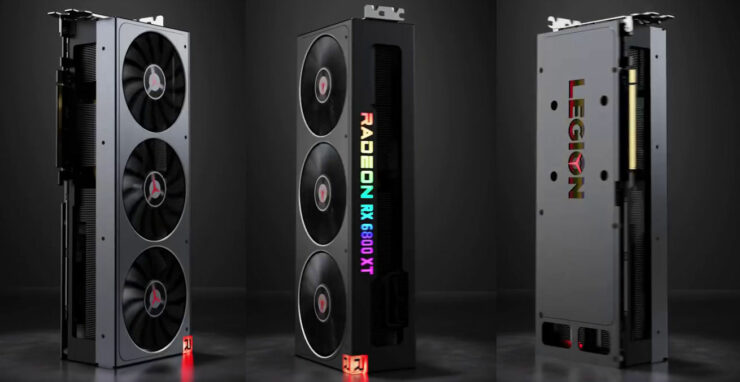 A new and unexpected member has entered the GPU market this time around. Lenovo has joined the pack of manufacturers using custom AMD cards with a custom version of the Radeon RX 6800 XT and RX 6900 XT named the Legion Edition. The specifications of the card are unknown, but the images give us some insight into what to expect.

The overall design of the RX 6800 XT and RX 6900 XT Legion Edition is a rectangular design and if you didn’t notice, they look eerily similar to the Radeon VII, AMD’s ultra-premium VEGA 20 GPU. The triple-fan cooler design, as well as the rectangular shroud, are the major similarities. One small detail that you wouldn’t notice at first glance is the “R” logo in a cube in the bottom corner. That is also a design feature of the Radeon VII. The major difference is that Lenovo has opted to add RGB lighting for the lettering on the card.

Both the Lenovo Radeon RX 6900 XT & Radeon RX 6800 XT Legion are powered by two 8-pin connectors and the max TDP is 300W. Both cards do look to be slightly larger than the reference design, but it doesn’t look like it will take up more than 3 slots. They both feature 16GB of GDDR6 memory. The backplate has been modified to feature the Legion brand’s logo. 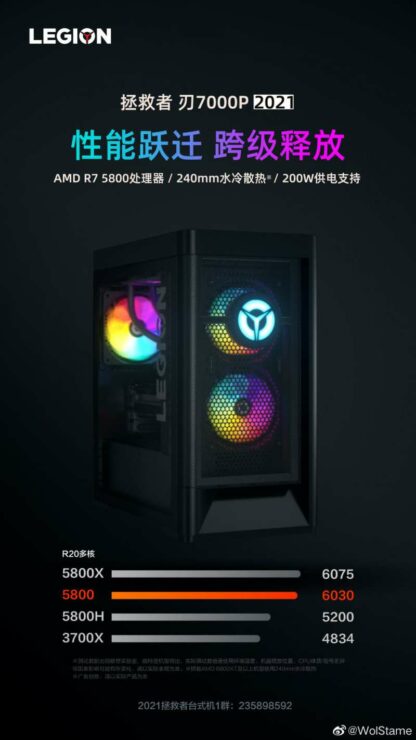 It’s currently unknown whether Lenovo themselves manufacture the Radeon RX 6900 XT & Radeon RX 6800 XT Legion Edition graphics cards or if they outsource to a third-party. These cards look to be exclusive to the Savior Blade 7000P gaming desktops. The pairing in the 7000P systems with the Ryzen 5000 series processors will allow the system to take advantage of Smart Access Memory.

The announcement of the Radeon RX 6900 XT & Radeon RX 6800 XT Legion custom graphics cards was seen on Lenovo’s Weibo page and looks to be exclusive to the Savior Blade 7000P gaming desktops which won’t do much for consumers looking to buy cards individually. Announcements of the card and desktop indicate that this most likely will be a China-exclusive product.