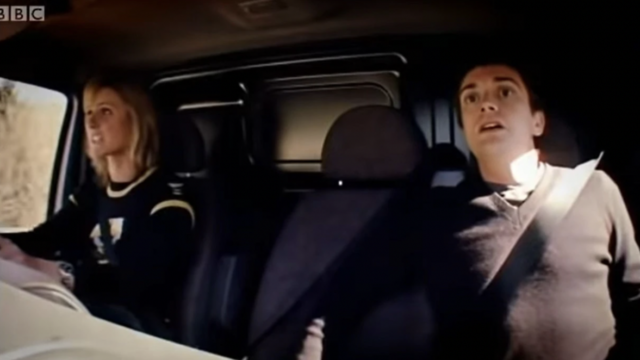 Sabine Schmitz, who has died aged 51 after a long battle with cancer, was not just a popular presenter of the BBC’s Top Gear.

The “Queen of the Nürburgring” was first and foremost a phenomenal racer, most at home burning rubber and shredding egos around motor racing’s most ominous and storied circuit.

And it didn’t matter what vehicle she chose to race in either.

Schmitz was first introduced to mainstream British television audiences in 2004 as part of a Top Gear segment to celebrate the 40th anniversary of the humble Ford Transit.

To celebrate the milestone, Top Gear decided to have Schmitz hammer a regular Transit around the 21-kilometre Nordschleife course.

The subsidiary aim was to humiliate Jeremy Clarkson.

The year before, Clarkson had been challenged to drive a Jaguar S-Type around the Nordschleife in under 10 minutes, a feat he achieved. Just.

His time of 9 minutes 59 seconds prompted Schmitz, who had coached Clarkson in her role as the Nürburgring’s resident “racing taxi driver”, to make an audacious claim.

“I tell you something,” Schmitz said.

“This really hasn’t been built for this sort of thing,” Hammond said one year on, sitting in the back of the bog-standard Ford Transit with Schmitz in the Nürburgring’s car park.

That much seems obvious. Although a Transit does have suspension more like a road car than its predecessor vans did, it still handles “like a school bus” according to Schmitz.

It was also pointed out that plenty of hardened petrol heads struggle to wrestle their conventional cars around the Nordschleife course in under 10 minutes.

“Well they are slow, but I am fast,” Schmitz said, laughing.

Limited to just 136 horsepower and a 0-60mph time of a laborious 21 seconds, this was always going to be a tough ask, but Schmitz was certainly taking it seriously.

“I have to brake with my left foot,” Schmitz told an increasingly nervous looking Hammond, “then I can keep my right foot always on the gas, see?”

It was not clear whether Hammond was able to take his eyes off the road to check on Schmitz’s pedal-work as they flew around in speeds of up to 180kph, dismissing the other track users as they went.

“Hurry up please,” Schmitz said, flying past a far more aerodynamic car — one of many she would pass over the course of the lap.

“I’m very glad that wasn’t me, being overtaken by a van,” Hammond said, hanging on for dear life as Schmitz smiled next to him.

“The Karrusell is coming. Fasten your seatbelts,” Schmitz said as they approached the famous sequence of blind, banked corners where Formula 1 pioneer Juan Manuel Fangio supposedly advised rookie drivers to simply aim for the tallest tree.

Hammond’s smile quickly disappeared while Schmitz whooped next to him.

Schmitz’s shrieks of delight were the exclamations of someone absolutely immersed in her element, seemingly oblivious to the risks associated with the unconventional vehicle she was piloting.

“Faster!” Schmitz said later with a grin, bouncing on her regular Transit seat as the tyres squealed and Hammond moaned: “Oh God, that was frightening.”

Hammond did appear to regain his composure towards the end of the lap though: “Nice drift,” he said as Schmitz slid out of one of the circuit’s 137 corners.

Despite Schmitz’s valiant efforts, the time was just short of the 10-minute mark, at 10:22.

Not satisfied, but warming to the task, Schmitz stripped the Transit of all extraneous weight — including Hammond and, oddly, her own belt — before another attempt was made.

This time there was less smiling as Schmitz’s competitive nature flowed.

At one point she said “I must be crazy” as she almost lost control around a corner.

Schmitz even admitted that she was scared while she was racing around the most feared of courses, estimated by Hammond to have claimed hundreds of lives over the years and where Schmitz herself admitted to have crashed “many times”.

“It was the hardest race I ever had in my life,” she said as she rolled off the circuit.

Her final time of 10:08, while still astonishing, was not quite that achieved by Clarkson.

However, everyone back at HQ was still impressed.

“I should be feeling smug about that,” Clarkson said in the studio after the segment was shown.

“But, I have to say, that was an astonishing piece of driving.”

“It was incredible,” Hammond agreed.

“It was just an ordinary day, there were guys in their Porsches [saying], ‘Look at me, I’m in my Porsche, ha ha,’ and they were [being] overtaken by a van driven by a girl.”

Although the joke of Clarkson nearly being beaten not only by a Ford Transit, but one driven by a woman, falls very flat, the admiration for Schmitz’s achievements in motor sport was very genuine.

Schmitz is the only female race car driver to win the annual Nürburgring 24-hour race, a feat she achieved twice in 1996 and 1997.

Introducing her to the studio audience to rapturous applause, Clarkson foreshadowed Schmitz one day joining the Top Gear team as a presenter, something she would go on to do in 2016 — just one year before being diagnosed with cancer.

She continued to compete as a racer until 2019.

The YouTube post of this segment on the official Top Gear channel has been watched over 5 million times.

The post Remembering when Top Gear presenter Sabine Schmitz raced a Ford Transit around the Nürburgring appeared first on The New Daily.