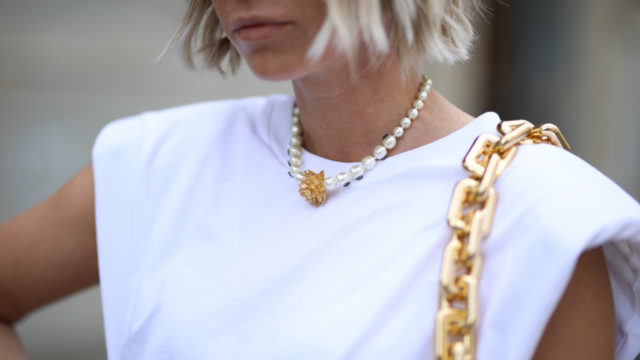 In my mind, pearls are always in fashion, now more so than ever.

There is something so perfect and timeless about a simple pearl earring, as Vermeer proved so emphatically.

In the past few seasons, we have seen them designed to be worn more casually, a single pearl slung on a chain, or cord, or used sparingly on non-expensive hoop earrings and chain bracelets. I have always been a huge fan of the classic three strand necklace, a symbol of glamour and sophistication worn so memorably by icons such as Jacqui Kennedy and Grace Kelly.

Many of us were left pearl necklaces just like these by our mothers and grandmothers and aunts – well not so much Princess Grace’s famous set, (which is by Van Cleef and Arpels, and studded with diamonds) but more like Jacqui’s necklace which was discovered after her death to be faux, made of glass beads covered in crushed pearl nacre. It was worth about $900 and sold, for reasons of historical significance for $277,000.

Both my mother and grandmother left me modest strands of tiny faux pearls, with pretty marquisate clasps, but unfortunately, they do not have the lustre of real pearls and have yellowed badly over time. But I am not sure if the three-strand necklace, or even the one strand choker is ageing or not. I thought not.

Then my friend came over wearing the prototype of a necklace she has designed, a single-strand choker of chunky misshapen grey/blue Tahitian pearls, with a funky silver clasp. She looked heaven. I decided I absolutely needed to order one immediately. I need to note at this point that she is 35, Indian, and beautiful.

Another friend, Janet, was there (more around my age). “Hmm, you and I would need a few extra pearls” she said matter-of-factly, as she tried it on. “Our necks won’t look quite the same.”  I tried it on after her and realised she was right. At some point in the last decade, my neck seems to have magically disappeared into my shoulders. It looked like when you put a collar on a bulldog, or a French bulldog at least.

Perhaps it was time to embrace an opera-length rope. I once had the great joy of wearing the most amazing rope of perfect Kailis South Sea pearls for several months on loan (they retailed somewhere around $80,000.) They were the most glorious things: after a few hours they took on your own body heat and seemed to take on their own magical luminosity. I wore them with everything, jeans, T-shirts, pyjamas.

Janet then had a wonderful idea. “Why don’t you start a sideline business, where women can bring in any pearls they may have been left, in styles that are too classic or old fashioned for them to wear now, and you make them into more contemporary versions?” Bingo. It won’t work so well with the faux versions, but for anyone fortunate enough to inherit a real pearl or two, this would be a gamechanger.

The post Kirstie Clements: Perfect and timeless, pearls will never go out of style appeared first on The New Daily.