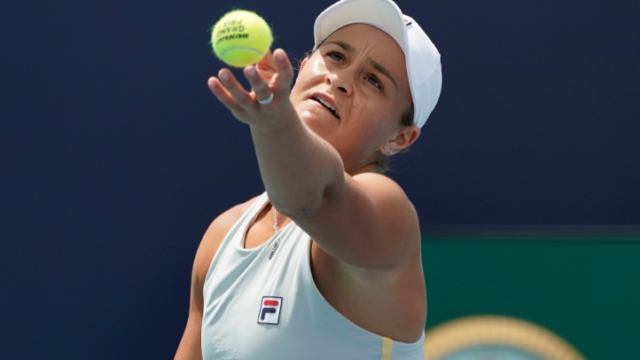 Ash Barty has reminded everyone why she’s the best in the world with a brilliant victory over Bianca Andreescu to lift the Miami Open title in her first tournament outside Australia for over a year.

Canada’s Andreescu had to retire with an ankle injury when 6-3 4-0 down in Sunday morning’s final, but Queenslander Barty was already dismantling her outclassed opponent before the sad conclusion.

Barty, who spent last year out of competitive action in Australia during the pandemic, demonstrated her readiness for global tennis domination again with a superb all-court display to outplay the 2019 US Open champion.

Barty was on the way to what seemed an inevitable victory when Andreescu took a tumble, turning her right ankle when 2-0 down in the second set and having to call for the trainer at the end of the game when 3-0 down.

She tried gamely to carry on with ankle strapped but, five points later, when the merciless Barty served an ace to go 4-0 up, the 20-year-old slumped to her haunches, broke down in tears and trudged to the net to concede after just 59 one-sided minutes.

Barty consoled the unfortunate Andreescu, who had not played at all in 2020 because of a knee injury, and admitted it had been a “brutal” way to have to win the final against a friend.

“Bianca, I’m shattered for you mate. I hope you recover well and this doesn’t hinder your season too much,” Barty told her at the trophy ceremony.

“I’m sure we’ll have many more good and hopefully healthy matches in the future.”

It was Barty’s biggest triumph since the 2019 WTA finals in China and capped a stellar fortnight’s work which saw her beat three top-10 players and three grand slam champions en route to successfully defending the title she won when the Miami Open was last played in 2019.

It felt even more remarkable considering that she had to battle jet lag after enduring a 50-hour journey from Brisbane to the US and survived being a match point down to Kristina Kucova in her opening contest.

“I’m just really excited that we could kickstart what is really going to be a long, long season away from home for us in the best possible fashion.

“It’s been a great week for Tyzz (coach Craig Tyzzer) and I, and we’re really excited.”

Asked what pleased her most about her run to her 10th career title and second this season, Barty said: “Without a doubt, the fight – always hanging in there, never giving up.

“We could very easily have had a very short tournament but we hung tough.”

But the final proved surprisingly one-sided with Andreescu looking a little out of sorts and weary from the outset, perhaps suffering from her 1.30am finish to a draining semi-final on Friday.

The Australian was on her case straight away in blustery conditions at Miami Gardens, racing into a 3-0 lead, almost looking better even than the 2019 Barty model.

Andreescu rallied briefly mid-set, but Barty dominated the 37-minute stanza before forcing an immediate break in the second when the Canadian surrendered the break with a double fault.

She’s a fighter, but Andreescu already looked beaten and a little dispirited before falling as she shaped to hit a forehand.

For Barty, there was the proud knowledge that she had just joined some great names by winning back-to-back Miami titles – Steffi Graf, Monica Seles, Arantxa Sanchez-Vicario, Venus Williams and Serena Williams.

Modest as ever, she shrugged: “I shouldn’t belong with that group. I haven’t earned the right to be on a list with those champions.

“They’re genuine champions and legends, and I feel very privileged to be mentioned in that sentence.”