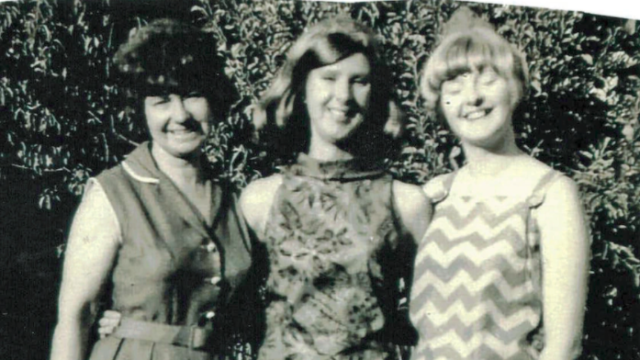 For decades, Yvonne Dite has carefully held onto the blue and purple dress she was wearing the happy evening she met her husband, Bruce, in January 1968.

About ten years ago, she decided that rather than keeping the mini dress at the top of the wardrobe, she was going to start wearing it again on each of her wedding anniversaries.

She said it felt like “a bit of fun” to wear the dress she had on the night the pair met at an event in the suburb of Moorabbin.

After the couple fell in love, Ms Dite said her husband told her she should never throw away the dress.

Since then the dress has ventured from the wardrobe to locations across the globe with Ms Dite, including Thailand and Sri Lanka.

The phone call from Carla: ‘I nearly fell through the floor’

It was during a trip two years ago that she looked at the label that read ‘Zampatti’ and decided to send a letter detailing the story of the dress with photos to the fashion label started by the iconic Australian designer Carla Zampatti.

“I nearly fell through the floor.”

Ms Dite said Ms Zampatti was impressed that she still had one of her early designs from 1967 when she had just started out.

She said, ‘it’s customers like you that make my job worthwhile’,” she said.

“I thought how wonderful, she’s a busy lady and she took the time to ring little me in Melbourne.

“Unfortunately I’ve only ever had the one dress, I couldn’t afford any more than that, but I’ve still got it and I still try it on every January.”

She said during the call the fashion designer said she hoped Ms Dite would keep wearing the dress for many anniversaries to come.

Ms Dite shared her story on ABC Melbourne radio talkback on Monday morning during a discussion about Ms Zampatti’s death at the age of 78 after she suffered a serious fall.

Other listeners shared their experiences looking after pieces by the designer for years.

One woman, Sue, said she had been wearing Carla Zampatti pieces for 40 years, since her early 30s.

“I still have the first item, a beautiful quality pure wool sweater with a straight neck and little slits on the sides,” she said.

Another woman said she kept part of the cream Carla Zampatti dress she wore as a going away dress after her wedding 39 years ago.

“I kept the sash for my daughter’s dress ups, but [I’m] now hoping my daughter can incorporate it into her wedding dress,” she said.

Since the fashion designer’s death, people across the country have been paying tribute to her influence and business success across the decades.

A state funeral will be held in New South Wales in her honour.

The knack to ‘transcend all generations’

“The most extraordinary thing about Carla was she was still dressing the 17-year-old for her school formal, whilst also dressing the mother of the bride,” Ms McCann said.

“She really did transcend all generations”

Ms McCann said not many Australians brands had been able to achieve the longevity of Carla Zampatti’s designs.

“Vogue Australia is 62 years old now and she was the only designer who had been there through every decade of our publication when we looked back through our history,” she said.

Chief Executive Women, an organisation representing woman in senior positions across a range of sectors, released a statement on Sunday describing Ms Zampatti as one of Australia’s “most special people”.

“Her success as a businesswoman forged the way for many other women, not just in the fashion industry,” the statement read.

“Her designs were worn by influential women from politicians, business leaders, royalty, actors, empowering women who connected to her brand both here in Australia and around the globe.”

The post ‘I nearly fell through the floor’: Fan recalls moment Carla Zampatti called her appeared first on The New Daily.