Electronic Arts (NASDAQ:EA) have delivered their results for the quarter ending March 31, 2021, with the company managing to narrowly exceed their guidance for the quarter and the full 2021 fiscal year. Net revenue for Q4 2021 was $1.35 billion, down around 10 percent compared to the same quarter last year. Net income was 76 million, better than the $19 million loss EA was projecting, but well down from the $418 million made during the same period last year. The low Q4 income was partly, but not entirely, due to a heft $165 million tax charge. 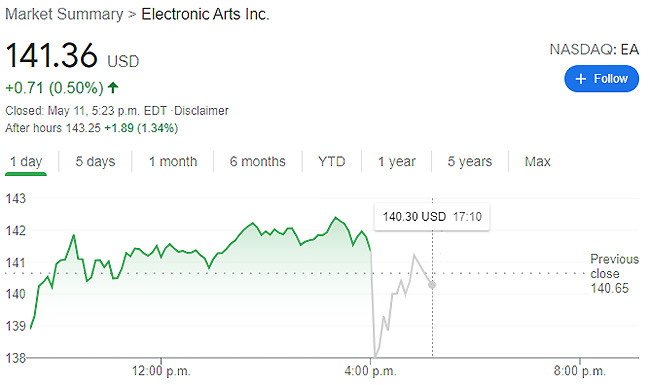 Apex Legends Ascends to the Top of the Mountain

Perhaps the most interesting aspect of EA’s Q4 earnings was the emphasis the company put on the free-to-play battle royale game Apex Legends in their report. While they usually boast about their FIFA and Madden Ultimate Team numbers first and foremost, COO Blade Jorgensen really touted the success of Apex Legends in the company’s Q4 earnings release…

EA delivered a strong quarter, driven by live services and Apex Legends’ extraordinary performance. Apex steadily grew through the last year, driven by the games team and the content they are delivering. Looking forward, the momentum in our existing live services provides a solid foundation for FY22.

There’s certainly plenty of reason to be happy about Apex Legends – the game has surpassed the 100 million player mark, with over 12 million weekly active players engaging with the game’s Season 9 update. The brand should only grow in FY 2022 as Respawn rolls out new game-changing content and prepares to launch Apex Legends Mobile. Of course, EA’s traditional sports business is still doing well, with FIFA 21 surpassing 25 million players and Ultimate Team players up 16 percent year-on-year. 74 percent of EA’s net bookings are now derived from live services and various in-game purchases.

A Big Battlefield Year Ahead

FY 2021 was a solid, if somewhat uninspired, 12 months for Electronic Arts, particularly considering the major boost in business COVID-19 generated for competitors like Activision Blizzard. That said, EA is predicting big things for FY 2022 including $6.8 billion in revenue ($7.3 in total net bookings when deferred live-service revenue is taken into account). This rosier outlook is mostly due to an overall stronger slate of releases, which include the Mass Effect Legendary Edition remaster, the Codemasters-developed F1 2021, and most importantly of all, a new entry in the company’s blockbuster Battlefield FPS franchise. You can check out EA’s full FY 2022 release schedule, below.

During their earnings call, EA largely reiterated what we already know about the new Battlefield, although they did add that the game will finally be revealed next month (sorry to those hoping for a trailer today). Thankfully, credible leaks have already revealed some potential details about the game. Most notably, it’s rumored Battlefield will return to a near-future setting and incorporate some sort of new battle royale mode. Paired with the rumors that Activision Blizzard is struggling somewhat to bring this year’s Call of Duty together, it seems like this may be Battlefield’s year to shine. EA CEO Andrew Wilson is certainly enthusiastic about what FY 2022 may bring…

Our teams have done incredible work over the last year to deliver amazing experiences during a very challenging time for everyone around the world. We’re now accelerating in FY22, powered by expansion of our blockbuster franchises to more platforms and geographies, a deep pipeline of new content, and recent acquisitions that will be catalysts for further growth.

Electronic Arts has built a reliable live-service revenue-generating machine for themselves, although if they want to truly compete with the likes of Activision Blizzard they need to replicate the kind of integration that company has pushed between their core Call of Duty games and Warzone battle royale. Perhaps that’s coming, but for now, EA remains a reliable bet.