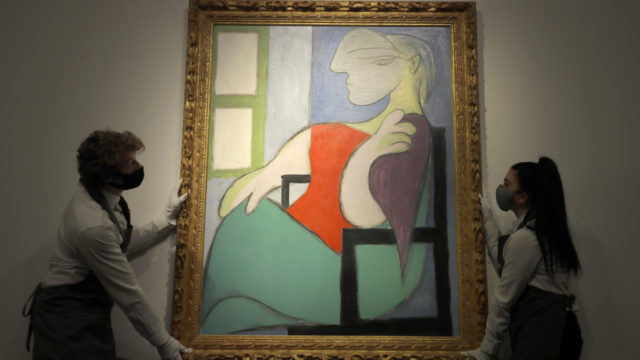 A vibrant, large-scale portrait that Pablo Picasso painted of his muse and lover Marie-Therese Walter has fetched $US103.4 million ($A133.8 million) at a Christie’s auction in New York.

The bidding for Femme Assise Pres d’Une Fenetre (Marie-Therese) started at $US45 million and shortly after surpassed $US55 million, the top estimate of the auction house experts, to stop at $US90 million, to which fees and taxes were later added.

The astronomical price was reached after an almost 20-minute battle between two phone buyers.

The piece, measuring 146 centimetres by 114 centimetres, is considered an exceptional work by Picasso, since the Spaniard usually painted Marie-Therese lying down, naked, with her eyes closed and appearing lost in her own thoughts.

In this work, she sits relaxed but commanding and stately, on a black chair near a window.

It was painted in 1932, one of the artist’s most productive and coveted years. “Everyone wants one of his 1932 works,” said Vanessa Fusco of the 20th Century Art auction at Christie’s.

Specifically, it was produced in October 1932 at Picasso’s Chateau de Boisgeloup in Normandy, and is part of a series of portraits of Marie-Therese that were exhibited in Picasso, 1932: Love, Fame, Tragedy, which in 2017 and 2018 was displayed at the Tate Modern in London and at the Musee Picasso in Paris.