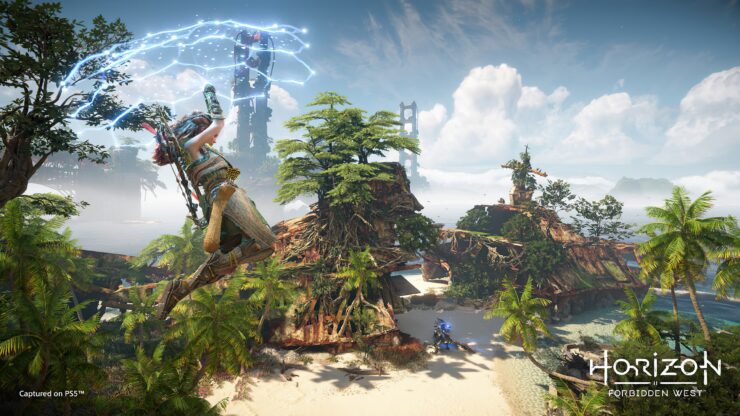 Guerrilla Games has been dropping a lot of info on Horizon Forbidden West following the State of Play gameplay unveiling. We learned, for instance, that the sequel to Horizon Zero Dawn features improved traversal options, such as a free climbing system, a grappling hook, and a glider called shield wing that you can see in the featured image above.

But what about proper flying? We know that feature was one Guerrilla had to cut from the original game because of tech issues, even though the developers really liked it. In a new interview with Singaporean website HardwareZone, Game Director Mathijs De Jonge didn’t really rule it out for Horizon Forbidden West.

We are aware that this feature is very, very high on the wishlists of many gamers, but I cannot confirm or deny anything about this. I can only talk about what’s in the actual gameplay demo that we showed.

This statement definitely leaves us hopeful that it’s actually in the game. Logic would dictate that if they were sure flying couldn’t be a part of Horizon Forbidden West, De Jonge should say so outright instead of being cagey about it.

If that’s really the case we may hear about it soon, anyway. While Sony hasn’t confirmed a release date yet, it is targeting this Holiday season. In fact, De Jonge revealed that Guerrilla already reached the beta milestone for Horizon Forbidden West; again, this gives us hope that we’ll play it this year.

We have just successfully completed our beta milestone, which is pretty far along. We’re now in the final stages of development. So we are polishing the game and fixing bugs. We are also wrapping up certain aspects of the game, like some of the machines being behind schedule – because it takes an enormous amount of time to build them. We’re working on the final cinematic. So, we’re really wrapping up. There’s still a lot to do with a game of this size and magnitude, but we’re in the final stages.

Horizon Forbidden West will be released on both PlayStation 4 and PlayStation 5, with the latter featuring all sorts of improvements ranging from better visuals to a 60FPS mode, DualSense controller support and 3D audio support.