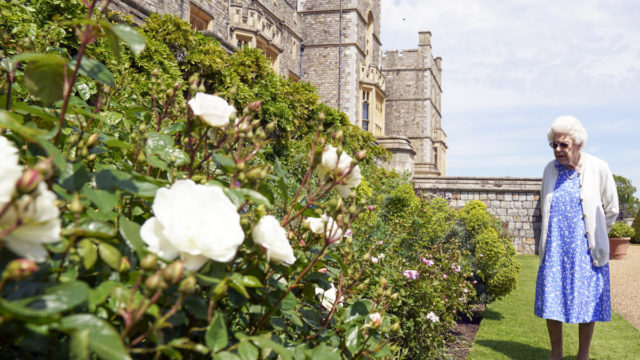 The Queen has marked what would have been her husband Prince Philip’s 100th birthday by planting of a newly bred rose named after him.

Philip, the Duke of Edinburgh, died on April 9, just two months short of his landmark birthday after more than seven decades of marriage to Elizabeth, who is 95.

Buckingham Palace said that last week the Queen had been presented with a Duke of Edinburgh Rose – a newly bred pink commemorative rose – in his memory.

It has since been planted at the rose border of the East Terrace Garden at the Queen’s Windsor Castle home, west of London. She has spent most of her time at the castle since the pandemic began, and it is also where Philip died.

“Whilst being very poignant, it was a delight to give Her Majesty The Queen … the Duke of Edinburgh Rose to mark what would have been [his] 100th birthday and to remember his remarkable life,” said Keith Weed, president of the Royal Horticultural Society.

The milestone came as the Queen’s grandson, Prince Harry, and his wife Meghan Markle, clashed with the BBC over the naming of their newborn daughter after the Queen.

Lawyers for the Duke and Duchess of Sussex have written to the broadcaster after it claimed in a story they had not asked the monarch if they could use her childhood nickname, Lilibet, for their new baby.

It has been widely reported that Harry and Meghan did consult with the Queen before the name was announced.

But in an article this week, the BBC claimed palace sources had said the Sussexes had not asked the Queen about using the name.

A spokeswoman for Harry and Meghan said their daughter’s name was mentioned in a conversation with the Queen.

“The duke spoke with his family in advance of the announcement, in fact his grandmother was the first family member he called,” she said.

“During that conversation, he shared their hope of naming their daughter Lilibet in her honour. Had she not been supportive, they would not have used the name.”

Baby Lilibet, who will be known as Lili, was born in California last Friday.

Meanwhile, a royalty from the sale of each of the new roses will go towards the Duke of Edinburgh Award Living Legacy Fund, supporting a scheme for young people that Philip set up and which operates in more than 130 countries.

For every rose sold, the company Harkness Roses will donate £2.50 ($A4.50) to a fund aiming to help young people from all backgrounds take part in the Duke of Edinburgh Awards, a popular youth award program set up by Philip in 1956.

Philip, who was born on the Greek island of Corfu on June 10, 1921, married then-Princess Elizabeth in 1947 – five years before she became queen at age 25.

Their marriage lasted 73 years, making Philip Britain’s longest-serving consort. The Queen has called her husband her “strength and stay” in public.

He devoted his life to royal service, taking on tens of thousands of engagements and accompanying the queen on official visits to some 140 countries. He retired from royal duties in 2017, at age 96.