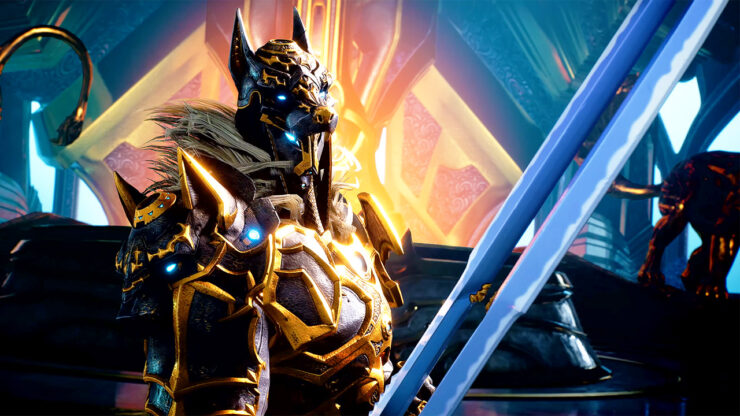 Godfall initially made its name as one of the first-announce PS5 console exclusives, but apparently that next-gen power wasn’t so necessary after all, because today during Gearbox’s E3 livestream, Counterplay Games announced the game is also coming to PS4.

Ah, but that’s not all – the game is also getting it’s first full expansion, entitled Fire & Darkness, which allows players to tackle the Fire Realm for the first time. The paid expansion will launch alongside the free Lightbringer update, which introduces the Lightbringer endgame mode – a new gameplay loop that will present some stiff new challenges and a variety of powerful loot.  You can check out a new trailer for all the new goodies coming to Godfall, below.

Looks like a solid new infusion of stuff for Godfall, and in addition to the new content, Counterplay has announced proper matchmaking is also being added to the game. Will the new updates and expansion be enough to salvage Godfall? That remains to be seen — Wccftech’s Kai Powell wasn’t exactly blown away by the game at launch…

While not our final score for Godfall, we’re reserving the opportunity to adjust the tally for Godfall based on additional endgame content. If it somehow redeems the lackluster loot that players will carve through during the campaign, that number might change. Otherwise, go into this one looking for some quality swordplay and subpar swords.

Godfall is available now on both PC and PS5. The game arrives on PS4, alongside the Fire & Darkness expansion and Lightbringer update, on August 10. Those who purchase the new PS4 version will be able to upgrade to the PS5 later for free. A price tag for the Fire & Darkness expansion has yet to be revealed. Anybody out there reconsidering checking out the game once the new content and PS4 version arrive?