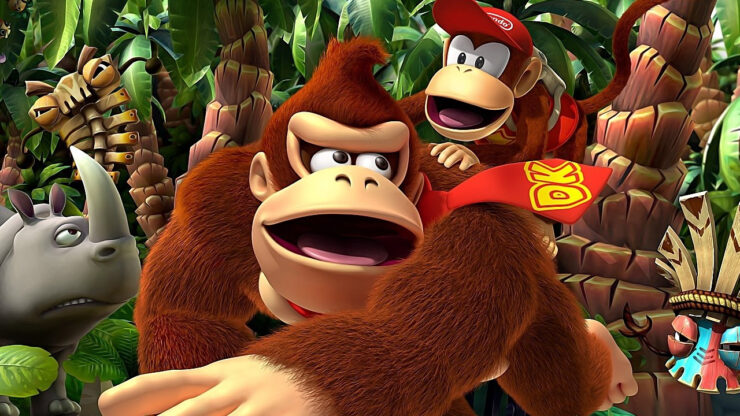 DK…Donkey Kong! DK…Donkey Kong is…where? It’s been quite some time since we’ve got a major new game in Nintendo’s original big franchise (2014’s Donkey Kong Country: Tropical Freeze being the last), but it seems the tie-wearing ape may be preparing for a big comeback. Prior to this year’s E3, rumors circulated that a new Donkey Kong game, developed internally by the same team that does the 3D Super Mario games, was on the way, but unfortunately the show came and went with no announcement.

Well, according to Nintendo insider Zippo (who’s delivered accurate info on everything from Paper Mario: The Origami King to Metroid Dread) Donkey Kong no-showing E3 doesn’t mean a new game isn’t in development. According to our insider, DK is planned to be the next Nintendo franchise that gets a big multimedia push, including animation (whether that’s a TV show or movie is unclear), a section at the Super Nintendo World theme parks, and yes, a Switch game that’s already been in development for 3 years and will likely kick off a new series.

Donkey Kong getting a big push makes sense, as I feel like the character has been seriously underutilized for years – people love that dumb ape! He’s also one of Miyamoto’s babies, second only to Mario probably, so I’m sure the legendary producer and designer is invested in making him a star. Of course, take this with a grain of salt for now, but Zippo has a solid track record and we’ve been hearing “something is happening with Donkey Kong” murmurings from other sources as well.

No word on when exactly we may hear more about the new Donkey Kong, but Zippo claims more info is likely coming “sooner rather than later.” What do you think? Excited for DK’s return? What kind of game are your hoping for? More hardcore DK Country platforming or perhaps something a little more unique and ambitious?