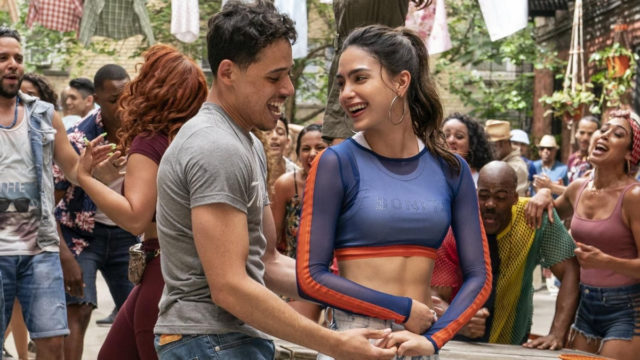 Part of the joy of a musical is that song and dance can occur anywhere and everywhere. Not just on the stage but in the bedroom, to the Wild West and on the streets of New York.

In On The Town (1949, based on the 1944 stage musical), Frank Sinatra and Gene Kelly (who also choreographed the movie) play sailors on shore leave in the big city.

In West Side Story (1961, based on the 1957 stage show) two rival gangs, the white American Jets and the Puerto-Rican Sharks play out the story of Romeo and Juliet on the Upper West Side, dancing to Jerome Robbins’ choreography.

This is also the case with In The Heights, an adaptation of the 2008 stage show written by Lin-Manuel Miranda (the creator of the Broadway-smash Hamilton) and Quiara Alegría Hudes.

Set in the largely working-class Latinx neighbourhood of Washington Heights in Upper Manhattan, all the characters wish for a better life: Usnavi plans to move to the Dominican Republic to set up his dad’s old beachside bar; Vanessa dreams of becoming a high-end fashion designer downtown; Nina carries the weight of the neighbourhood expectations at Stanford University in California.

And throughout all of this, they dance and sing.

Miranda’s songbook draws on references from Latin, to hip-hop and rap, and Christopher Scott’s choreography also traverses a wide range of styles from breakdancing and popping, to ballet and Jamaican dancehall.

They both extensively reference classical musicals, too.

Spontaneous song and dance is the most enjoyable part of many movie musicals, and a defining element of early examples of the genre.

In the classical Hollywood period from the 1930s to the 1950s, the film musical was in its prime.

Musicals brought large crowds to the cinema, drawing on stage musicals, vaudeville, cabaret and operettas, melding them together with camerawork and editing to wow audiences.

The energy of Broadway choreography was enhanced by camerawork that allowed the audience to get up close with the dancers.

One of the major choreographers and directors of this era was Busby Berkeley.

Berkeley’s work was designed to be filmed from above, with his dancers creating beautiful kaleidoscopic choreography.

During In The Heights’ number 96,000, the whole block performs in a water ballet at the local pool, reminiscent of Berkeley’s Million Dollar Mermaid (1952).

The act of 96,000 is quite the technical feat. It took director Jon M Chu three days to shoot with 700 extras in New York’s public Highbridge Pool. He also had to deal with thunderstorms and New York City restrictions on drone photography which required the use of a crane.

West Side Story won 10 Academy Awards, including Best Picture – the most of any film musical – and was lauded for Robbins’ incredible choreography.

Robbins used dance as an integral part of the storytelling to express the simmering tensions between characters.

In In The Heights, choreography is again used to express the excitement of budding romance, frustration and grief.

During The Club, Usnavi competes for Vanessa’s attention with male clubgoers who all want to dance with her.

Scott’s snappy Latin choreography echoes Dance at the Gym (Mambo) from West Side Story, where building tension between the two gangs is expressed through their fight over space on the dance floor.

Nina and Benny’s final emotional farewell number, When the Sun Goes Down takes them up the side of a building in a nod to Astaire dancing on the walls in Royal Wedding (1951).

The couple start on the balcony looking at the George Washington Bridge dominating the skyline.

As the song swells, their love for each other helps them defy gravity to spin and twirl up the apartment block to the roof thanks to special effects.

Astaire’s original number, You’re All the World to Me, required the set to be built in a revolving barrel with the camera mounted in place.

The whole neighbourhood in joy

There is a sense of spontaneity to the musical numbers in In The Heights. They appear to be immediate, unfiltered outbursts of emotion.

In the opening eight minutes, the sounds of the block – gates closing, Usnavi jangling his keys, a man hosing the streets – is all rhythm and music for the opening number. Even the piragua man selling his shaved ice dessert on the street (played by Miranda himself) joins the chorus.

An entire neighbourhood joining in on a number is a typical gimmick of the film musical.

It is such a trope it is often referenced in non-musical films, like when Joseph Gordon Levitt’s good mood inspires a crowded park of people to dance with him through the streets in 500 Days of Summer (2009).

In In The Heights, during a heatwave at the height of a neighbourhood blackout, Daniela gets the block back up on its feet and celebrating their culture. Everyone joins in on Carnaval Del Barrio, in joyous community celebration.

The spectacular energy and vibrancy of this number is what musicals ultimately aim for in the audience: To get them up and dancing on the street.

The post Unpacking <i>In The Heights’</i> choreographic film references, from Busby Berkeley to <i>West Side Story</i> appeared first on The New Daily.