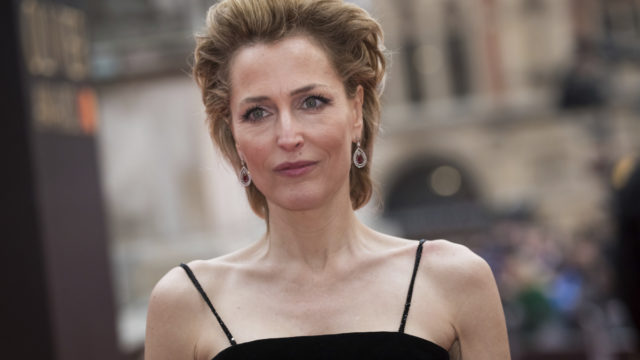 Social media has lit up like the Fourth of July after award-winning X Files actor Gillian Anderson dropped a bombshell about her personal dressing habits during a live Instagram session.

Anderson – who portrays stiff-upper-lip British PM Margaret Thatcher in The Crown  – had just arrived in Atlanta, Georgia when she hosted a live Q&A for 32 minutes from a comfy couch in a lounge somewhere.

She was asked 50 questions.

Among the standard “safe” shopping list to ask celebrities – like favourite food (papaya), best filming location (Scotland), who you’d like to be with on a desert island (maybe not Detective Superintendent Stella Gibson from Irish psychological thriller The Fall), someone asked what her “go-to lockdown outfit” was.

Bras, at least for Anderson, have become a casualty of the global pandemic.

W Magazine observed of Anderson’s reveal: “Wearing a bra nowadays feels like a declarative statement that we’re leaving the house – which, even though hot girl summer is in full effect, going out still feels a bit, well, alien”.

As for what she wears indoors, Anderson, 52, said she would wear “comfortable” black track pants and a black hoodie “every day” if she could.

“[It’s] probably the same as my go-to out-of-lockdown outfit,” she said.

She laughed about her “jokey statement”, and her viewing audience laughed with her, feeling a sense of relief that they weren’t the only ones feeling constricted by thick wires and backstraps.

Nicky Clark wrote in the UK’s The Independent that there were many out there “joyfully agreeing” with her.

“The vast majority of bra wearers are experts by experience,” Clark wrote.

“If we actually were where we should be in the design of underwear, then there wouldn’t be so many women joyfully agreeing with and endorsing Anderson’s jokey statement choosing instead to embrace comfort.”

Her comments were shared on social media, including: “If two-time Golden Globe and Emmy winning actress Gillian Anderson says no more bras, who are we to disagree”.

Anna wrote: “Gillian Anderson casually told us that she no longer wears bras and I have never stanned her harder than I do right now love of my liiiife.”

Crystal agreed: “We are all there with you Miss GillianA.”

And this gem from Sue Spiry: “Preach! I ditched my bras at the start of pandemic and haven’t looked back! Tanks, bralettes or nothing feels so much better! #byebyebra”

The post <i>The Crown</i>’s Gillian Anderson no stiff upper lip when it comes to underwear appeared first on The New Daily.