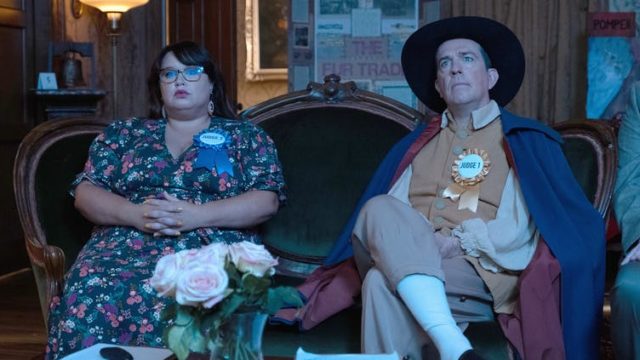 As the lockdown continues, I find myself looking for Indigenous content to watch on TV to feel a sense of nourishment and joy I miss from seeing my extended family, my friends and my fabulous work colleagues.

While Zoom has almost become an everyday activity, chilling out watching a series or movie has filled my evenings. I have exhausted the full range of Aboriginal and Torres Strait Islander content on iView. I thoroughly enjoyed the second watch of one of my favourite actors, Aaron Pedersen, in Mystery Road, and catching up on episodes of Black Comedy.

But I have also been indulging in Indigenous films and series on streaming services, particularly from North America. One I have enjoyed recently is Rutherford Falls (2021), currently streaming on Stan.

Set in a fictional town in New York State, neighbouring the fictional Minishonka Nation, Rutherford Falls is ostensibly about Indigenous-settler relationships, through the story of the friendship between Nathan Rutherford (Ed Helms) and Reagan Wells (Mniconjou and Sicangu Lakota woman Jana Schmieding).

At the centre of the titular town is a colonial statue of Lawrence Rutherford, said to be the founding father of Rutherford Falls.

The statue is fondly referred to as “Big Larry” by his descendant Nathan – but is derided by the many drivers who crash into it each day.

The story reveals how settler politics continue to uphold the unequal distribution of power that plays out in themes such as how we remember or commemorate the past. And it does so while being full of insider jokes, good humour and joy.

Whose history do we celebrate?

Monuments such as Big Larry serve as a permanent marker. They are a link between present and past generations, committing particular figures to memory and assigning them with importance and meaning – regardless of whose lands they stand on and the often brutal histories they represent.

The series makes fun of the ludicrous nature of some of these monuments. Big Larry is situated in a hazardous position in the middle of the main road but, regardless of car crashes, Nathan continues to fight to ensure the statue remains in this position of prominence.

It is, he argues, about history.

Reagan and Nathan are best friends. Nathan has had a relatively privileged life, as a member of the founding family of the town.

Reagan, as an Indigenous person, is not subject to the same privileges as her friend. While Nathan’s relative stands tall in the middle of town, Reagan has to work incredibly hard to raise funds to create a museum commemorating her ancestors.

In an episode that stands out for me, Nathan’s friend gets drunk and vandalises a local historical site.

Nathan, while taking his friend home, asks Reagan to leave a note for the state parks official to “give him a call” in the morning about the defacing of the historical site.

“Vandalise public property and leave a note?” Reagan mutters to herself in disbelief.

This series is particularly interesting to me because it involves a number of Indigenous writers and a large cast of Indigenous actors.

Four of the first season’s 10 episodes were directed by Sydney Freeland, a Diné (Navajo) person. Indigenous actors are cast in leading roles, including Schmeiding as Wells, and Plains Cree actor Michael Greyeyes as Terry Thomas, CEO of the Minishonka’s casino.

While Terry may be an avowed capitalist his intentions are always grounded in the collective benefit of the Indigenous community in what he describes as “Tribal capitalism”.

Rutherford Falls features Indigenous lives in all of our complexities. It shows strained relationships between Indigenous people and settlers, but also friendships. It tells stories of young Indigenous people: how they are engaged in maintaining and sharing cultural practices, and the happiness they experience in doing so.

As Torres Strait Islander scholar Martin Nakata has written, Indigenous humour “reveals the ignorance of outsiders of how we operate in and understand our world and many a merry laugh we have all had at whitefellas’ expense”.

Indigenous comedy is where we make fun of each other and, most importantly, make fun of colonisation. Rutherford Falls, like Black Comedy, does this by having Indigenous writers, actors and storytellers telling the realities of our lives and histories.

Fun and joy are a big part of our lives. As actor Jana Schmeiding told Vanity Fair: “our joy is as vast and sacred as the land we’ve inhabited for thousands of years”.

The post <i>Rutherford Falls</i>: A laugh-out-loud TV show about colonisation appeared first on The New Daily.