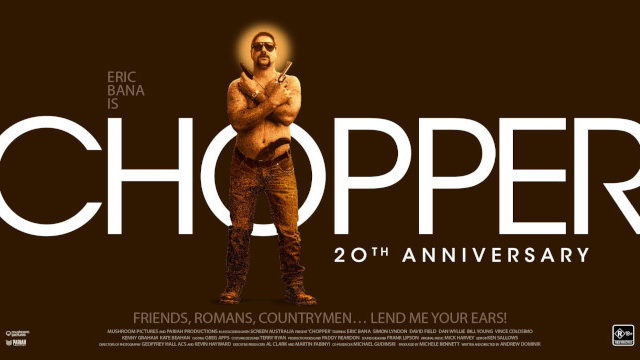 The film was an audacious combination of hard-hitting crime and oddball charm, perhaps reflecting Australian cinematic culture at the time.

In 1992, Romper Stomper‘s ugly portrayal of neo-Nazi violence was so incendiary, critic David Stratton famously refused to rate it.

Later, the emotionally eviscerating The Boys (1998) forced Australians to recall the horrific murder of Anita Cobby.

Meanwhile, films like The Adventures of Priscilla, Queen of the Desert (1994), Muriel’s Wedding (1994) and The Castle (1997) treated Aussie quirk as endearing.

Chopper‘s eccentric mood was one of reckless abandon, courting an uncomfortable laughter with its sheer audacity.

These include the senseless murder of a fellow inmate and his decision to mutilate his own ears as a ploy to be transferred to a new jail, away from prisoners bent on retaliation.

In 1986, out of jail, Read is a paranoid menace reigniting old hostilities with Melbourne’s criminal underworld, while moonlighting as an unreliable police informant.

Finally, in 1991, we see him back behind bars, lapping up the fleeting spoils of his celebrity status.

Chopper’s success is in no small part dependent on Eric Bana’s unhinged performance as the feckless thug.

Everything about Bana’s performance is captivating. His high nasal inflection of voice is utterly incongruous with the tough guy facade. He can radically shift the tone of a scene with a flash of his eyes.

With this performance, Chopper catapulted Bana’s career from TV sketch comic to an international acclaimed actor.

The film is quick to acknowledge its undoubtedly embellished source material. A title card declares “narrative liberties have been taken”. As Read quips: You know me! Never let the truth get in the way of a good yarn!

Such nods permit mischievous flourishes of style. We see the murder of “Sammy the Turk” from several, sometimes contradictory, perspectives. The most ostentatious of these has characters take turns describing their role in the incident straight to camera in rhyming verse.

Chopper also taps into Australia’s long-standing fascination with anti-authoritarian figures. Our first feature film was The Story of the Kelly Gang (1906), controversial even on its release for presenting a bushranger as sympathetic figure.

Chopper does not so much glorify Read as present him as a bizarre national curiosity. His iconic handlebar moustache and innumerable tattoos draw attention away from his earless profile.

The film’s humour simultaneously heightens and undermines the cruelty it depicts. Viewers are repeatedly stranded in the farcical chasm between the severity of Read’s actions and his disproportionate response.

But Dominik’s film undoubtedly spurred Read’s notoriety on and off screen. In 2018, the miniseries Underbelly Files: Chopper saw the role reprised by Aaron Jeffery to mixed reviews.

In the wake of Chopper, Read continued to court controversy until his death from liver cancer in 2013. From a comedic speaking tour to his foray into children’s literature , Read was a perennial iconoclast.

On its cinematic re-release two decades on, Chopper retains its shock factor. The film is aggressively self-aware in its provocations, goading its audience with a conspiratorial wink.

At every turn, Chopper shows up the gulf between deadpan absurdity and brutal reality, daring you to laugh at things you know you shouldn’t.

This dynamic is revealed early when Read stabs a fellow inmate in a graphically depicted unprovoked attack. While his victim bleeds, Read calmly informs responding guards “Keithy seems to have done himself a mischief” – a wry one-liner that has since entered the Australian vernacular.

Read is at his most ludicrous during interactions with underworld figure Neville Bartos (Vince Colosimo). When detectives ask Read about a bungled stick-up that ended with a frenzied trip to the hospital, the crim’s denials highlight his own cockeyed logic:

Why would I shoot a bloke – BANG – and then put him in the bloody car and whizz him off to the hospital at a hundred miles an hour? It defeats the purpose of having shot him in the first place.

Likewise, Read’s boasting to a news reporter that he is a best-selling author despite being “semi-bloody-illiterate” retains its humour.

Yet, while some of the film’s absurdities will still turn an uneasy grin, at other times its wilful envelope-pushing is tougher to stomach.

Confronting girlfriend Tanya (Kate Beahan) at her mother’s home over alleged infidelity, Read savagely beats her before headbutting the older woman. This brutality is offset with another preposterous remark (“Have a look what you’ve gone and done. Your mum’s upset!”) soliciting the audience for more uncomfortable amusement.

Given the shift in the public conversation about domestic abuse over the past decade, viewers may have a different response than they did 20 years ago.

Will today’s audiences still embrace Chopper? I suspect most will, even if some of its excesses are freshly abrasive. Others will still be put off by its graphic violence and caustic humour.

Chopper won’t please everyone. But, as our titular character opines, “even Beethoven had his critics”.

Chopper is in select cinemas from August 26

This article is republished from The Conversation under a Creative Commons licence.

The post <i>Chopper</i> is a knowing wink at the audience. Will audiences 20 years later still wink back? appeared first on The New Daily.