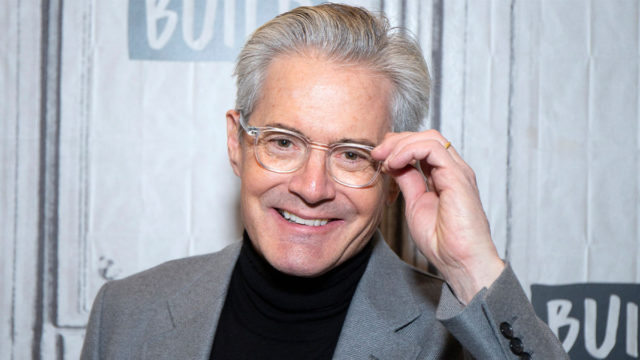 The star, perhaps best known for his role as agent Dale Cooper in 1990 cult classic Twin Peaks, has not revealed why he has come to Australia from LA.

But unlike some other Hollywood A-Listers – we’re looking at you Nicole Kidman – it seems MacLachlan did not get an exemption to quarantine in a private home.

And it’s great news for fans, because it’s only day two and his hotel quarantine content is already entertaining.

Posting a daily update to social media, mug in hand and with a beautiful city view in the background, MacLachlan kicked off his video diary with some creepy, crawly Aussie trivia.

In his first post, captioned: The wildlife is giving me the nicest welcome,  the actor gives a friendly greeting before informing his followers that Australia is home to some not-so friendly fauna.

“Did you know that the Sydney funnel web spider is one of the most dangerous spiders in the world? It can kill a human in 15 minutes and its fangs are so sharp they can bite through a glove or even a fingernail,” MacLachlan said.

Then in a move many can likely relate to, talking about the eight-legged death trap seems to trigger the suspicion that he’s spotted one, causing him to run for dear life.

The Sex and the City star apparently survived the encounter, following it up with a day two post on Tuesday morning.

This video is captioned: Really feel like I’m settling in to Australia!

What follows is a laugh-don’t-cringe series of colloquialisms that he could easily have gleaned from a recent study of ‘Aussie slang’.

MacLachlan opens with a grinning “G’day from Sydney”, gently setting viewers up for what comes next.

He claims he’s doing OK in isolation, but if his gleeful descent into barely sensical Aussie lingo is anything to go by – his family back in the US is probably slightly worried.

“Crikey! My day is chock-a-block. Fair dinkum. Once I pull on my dacks,  from brekkie til arvo and even on to din-din I’m flat out. There’s heaps to do. Even though it’s deffo not hard yakka I’m no bludger. I reckon it’ll pay off,” he says.

From there he manages to scatter “budgie smugglers,” “thongs”, “Esky” and even “cobber”.

And this bloke has really done his research, because he even attempts to redeem the 1986 Crocodile Dundee faux pas by promising to chuck not a shrimp, but a vastly more appropriate “snag” on the barbie.

You can tip your Akubra or cork hat to that – whichever you prefer.

Social media users have certainly taken to the stunt, with his second video clocking up more than 87000 views along with invitations to come and visit.

Twitter user @JEarlCleveland claimed to be disturbed that he could actually understand what MacLachlan had said in the clip, following up with the contentious claim that Australian’s don’t say “barbie”.

The video also sparked some backlash, with complaints that parents and loved ones overseas would like to “settle in” to Australia too, but don’t qualify for entry.

“My mum used to settle in to Australia very quickly too and still would if she wasn’t deemed non immediate family. But no big deal right? Will just have to wait another year or two before the [Australian government] let us reunite,” one user wrote.

But MacLachlan’s followers seemed to mostly be impressed by the American’s grasp of the local tongue and wanted to know what project he had come to Australia for.

The visible delight he draws from butchering English in a style any true blue Aussie would be proud of is at least an enjoyable distraction.

It will be a hard act to follow, let’s hope he puts as much effort and flair into days three to 14.

Oi MacLachlan! Hang in there, mate.

The post <i> Twin Peaks </i> star ‘settling in’ down under appeared first on The New Daily.