When I started texting on a smartphone years ago, I thought I had learned where all the punctuation marks are. So I was flustered when I was texting a friend the other day, and I suddenly had no idea where the darn quotation mark button was.

I was using a new digital keyboard called Typewise that I had added to my smartphone for what I hoped would be a better typing experience. Instead of the standard QWERTY keyboard with four lines of keys on my iPhone, I was using Typewise’s hexagonal, or honeycomb, keyboard layout.

I had taken a tutorial that came with the app the first time I used it, and I was desperately trying to remember where punctuation marks like quotes were kept. I was tempted to switch back to my usual default keyboard, but I kept clicking around until I finally found the quotation marks. I did it!

Was texting going to be a treasure hunt every time? This wasn’t going well right from the jump, but the app claimed eventually this keyboard would be faster and easier. I’d have to commit to it.

You might not think about what you use to type out texts, emails, or even addresses on navigation apps because the default keyboard just seems like a fixed and unchanging fact of life. But Typewise is an app that adds a different digital keyboard to your smartphone.

Typewise is one of a few alternative boards you can add, like Google’s Gboard with voice-to-text, glide typing, and GIF search or Microsoft’s SwiftKey known for its predictions for text and emoji. But unlike those keyboards, Typewise has large hexagonal-shaped keys in a different arrangement that form a honeycomb shape instead of traditional straight lines. Instead of “q, w, e, r, t, y” on top, Typewise has “w, e, t, y, i, o” at the top. 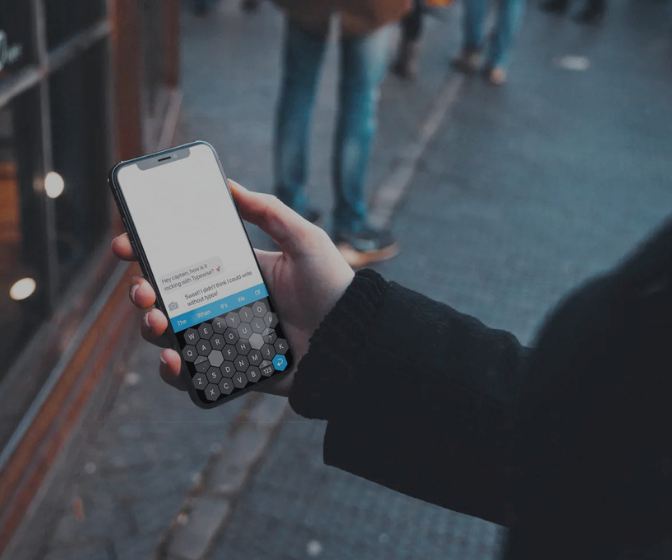 The keys themselves are also bigger. These are supposed to make for smoother, faster typing once you’ve learned the layout.

Predicative text suggestions are also supposed to speed things up as the keyboard learns how and what you type and offers suggestions that get more accurate over time.

How to make Typewise your primary keyboard

To use on your phone you need to download the app and then add the keyboard. Typewise isn’t available for tablets, so for any iPad iMessages, you’ll be back to using the default keyboard.

On an Android go to: Settings, then System & updates, and under Language & input find the Typewise option.

On an iPhone: Head to Settings, then General, then Keyboards, and finally Add New Keyboard.

When text pops up on your phone you can switch to different keyboards by clicking on the globe button and you can select any of the keyboards you have downloaded. You’ll notice Typewise on the bottom of the list below. 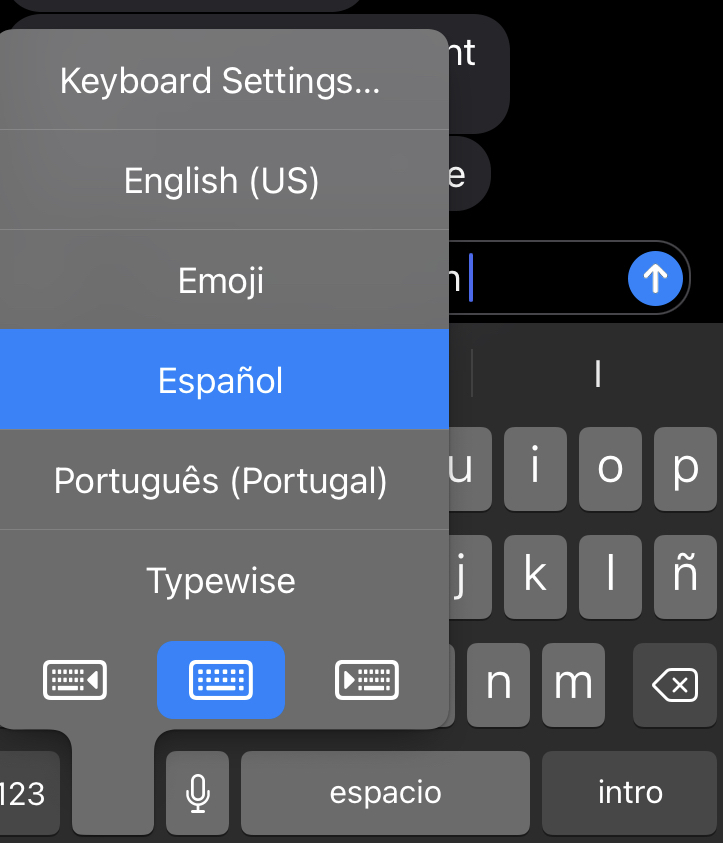 Switching between languages on an iPhone is a pain.
Credit: Sasha Lekach / Mashable

How much does Typewise cost?

For the free version, it’s just a matter of downloading the app and adding it to your keyboard options, as explained above.

Is it worth it to get the premium version, Typewise Pro? If you’re writing to your mom in Spanish, your boss in English, and Portuguese to your friends, then yes. One of the premium features is automatic language detection. So if you start writing “atardecer” (sunset in Spanish) it won’t recommend “altar decertification” as it does with the English keyboard.

Other Pro features include personalized suggestions (like if you write “hiya” instead of “hi” usually), vibration feedback that you can adjust in intensity for when you touch a key, and auto word replacements to set up shortcuts, such as a typing “a1” for your full address or “bts” for “be there soon.”

With Pro you can choose from 16 different keyboard themes in varying colors including rainbow, an ombre purple, and even a sunset color gradient.

Typewise warns that it could take anywhere from two days to a couple of weeks to get comfortable with the different typing layout. It can be tempting to give up and revert back to the usual QWERTY keyboard, but that just slows down the learning curve.

Once you start using the keyboard more you appreciate that the space bars and commonly used punctuation marks like question marks, exclamation points, commas, and periods are in the center of the board, not all the way at the bottom.

After talking to the cofounder of Typewise, David Eberle in Switzerland, I learned that when we type we use the space keys the most. As much as 25 percent of our keystrokes are spaces. On the typical digital keyboard, the space key or bar is at the very bottom of the screen where Eberle says it’s more difficult to reach. So instead, the space bar becomes two hexagonal keys in the center of the Typewise keyboard.

I personally love how you delete on the Typewise keyboard. Instead of a delete button that is always in the same spot, you can swipe left anywhere on the board and you’re deleting. Swiping right gives you a space.

Using capitalized letters is also simplified with the app. Instead of finding the caps lock button you just swipe up on the letter you want in uppercase.

A keyboard for language lovers

Since WhatsApp remembers which keyboard I use for which chat, whenever I text with my Spanish teacher in Lima, Peru, the Typewise keyboard comes up as the default. In this way, I’ve gotten accustomed to the funky layout thanks entirely to the Spanish language.

I’ve also come to appreciate the properly spelled suggestions in Spanish, a language in which I’m not yet a master speller. I could add other such dictionaries from a long list of languages that starts with Afrikaans and ends with Vietnamese. 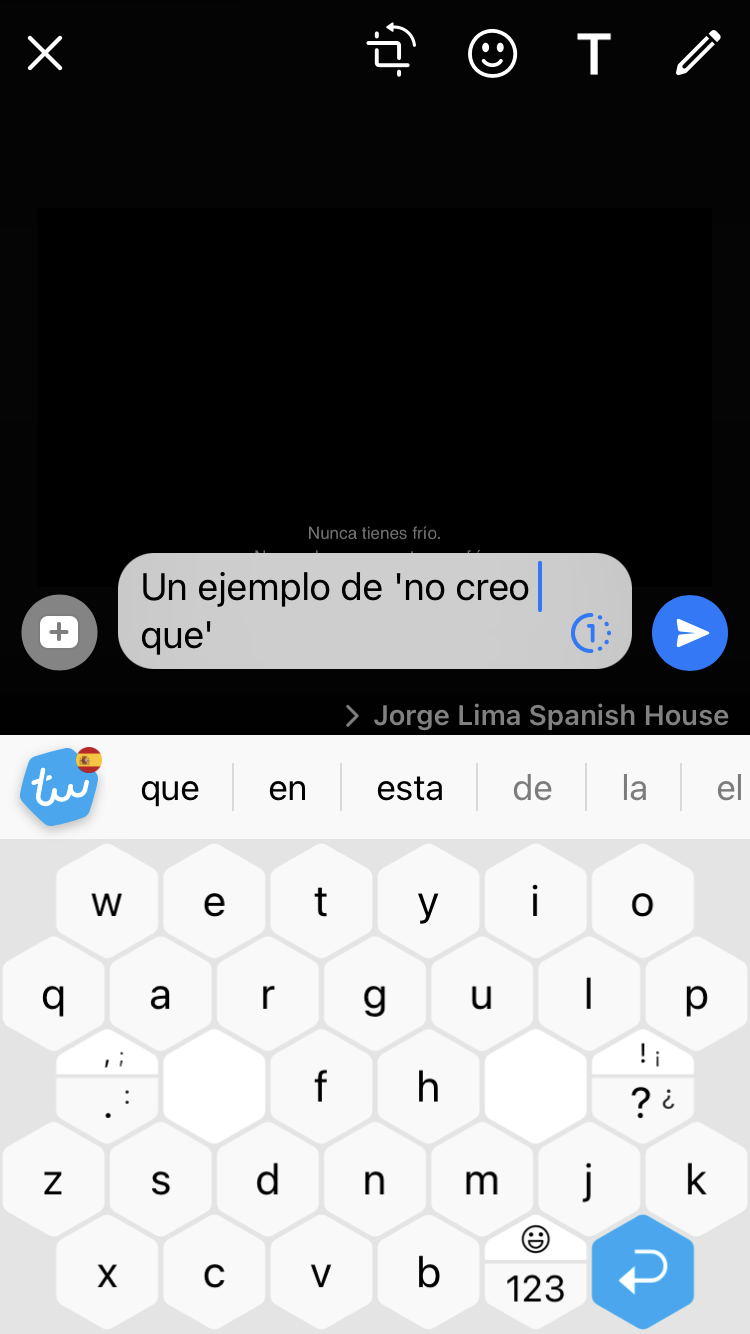 Typewise’s Eberle emphasized that “For this to work it really comes down to privacy.” He promises that Typewise isn’t listening to your conversations or taking that information to sell or market products to you. The app doesn’t have any ads and relies on paid subscriptions for the premium version.

Instead, the AI works on your device, not the cloud. “We never send typing data off your phone,” he assured. That means any personal information gleaned from what you type, like a shipping address, credit card number, or secret relationship aren’t shared with outside parties.

Its developer, icoaching, does have data practices already in place, though. It’s not linked to you, but it can collect diagnostics, usage data, how your tutorial went, and other settings.

What you type is inherently a very private activity, so the app has to pull back on unleashing its full AI on everything you write to everyone. Instead, it slowly learns more general typing patterns and often used phrases — all on the device and without spying on every text and word you type. You can download an offline version of the keyboard that doesn’t collect any data. Pro users can switch to “offline mode.”

To Eberle, it’s not just about building an app or a keyboard, but “building a text prediction technology.” Eventually, the AI will make typing faster and faster.

“Our mission is to decode human thought,” he said.

If you find the default keyboard frustrating or you’re tired of switching to different languages on your built-in keyboard (and don’t mind paying for Pro), go for it. What can it hurt to give an alternative a try? If you put in the time it takes to master the basics, you might become a full-time Typewise user.

As to shelling out for the paid version: Only if you consider yourself a die-hard smartphone power user. The predictive feature and potentially faster typing aren’t dealmakers, but they are nice deal sweeteners.