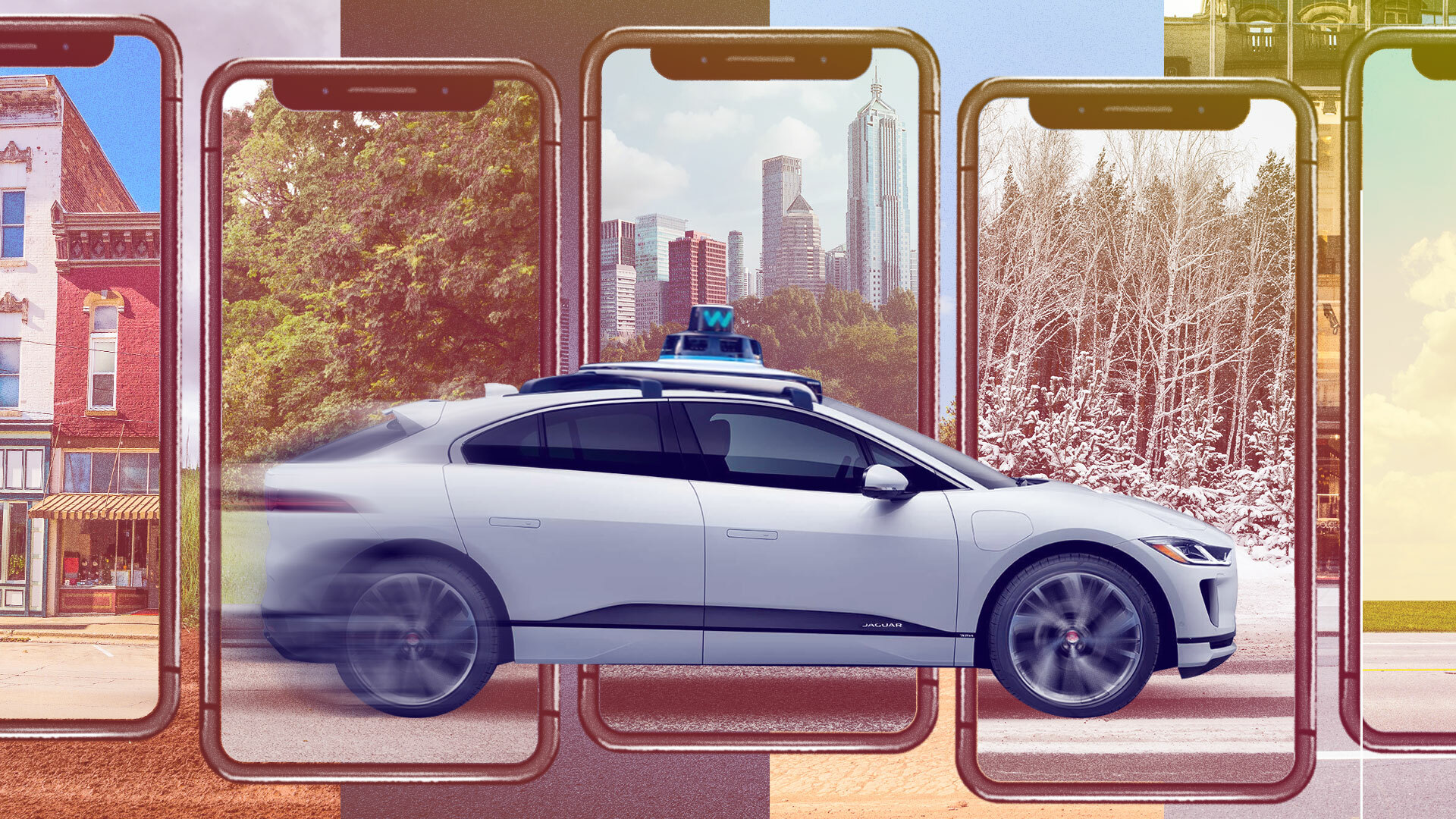 “Would you try this?”

In a 15-second video we see a driverless Waymo minivan approach before Lovasz hops in and shows that no one is at the wheel. “Ngl it was trippy at first,” reads a caption, as the steering wheel moves on its own. 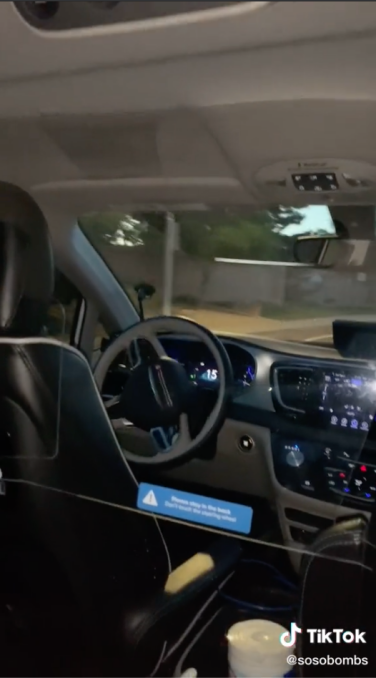 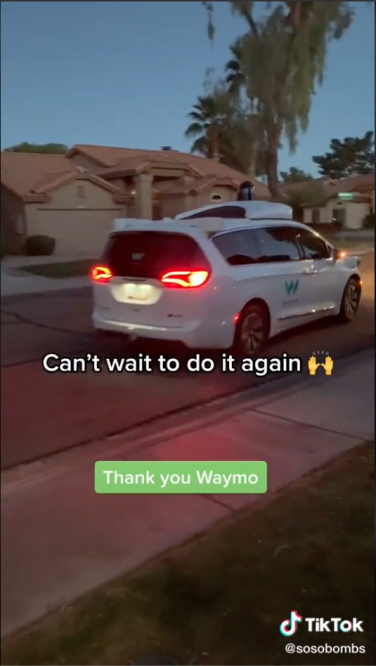 Welcome to the place known as #autonomous TikTok, or #selfdriving TikTok, or #driverless TikTok. Whatever hashtag it’s known by, this is where the far-off concept of self-driving cars is portrayed as an everyday reality thanks to posts from early adopters.

Based on the success of her first post, Lovasz — or @sosobombs — continued documenting her experience as an early rider using the Alphabet-owned Waymo One robo-taxi service in the Phoenix, Arizona area. Waymo vehicles are the only Level 4 autonomous cars available for public use, so far. The cars can operate without human intervention in most driving situations. This week the robo-taxi expanded to riders in San Francisco.

Since that first post, she’s put up 30 videos about using Waymo driverless taxis. “There’s only so many ways you can show a car driving itself,” Lovasz joked in a recent phone call.

She doesn’t work for Waymo, but she has taken it upon herself to show how accessible the new technology is to everyday people. She films every Waymo trip she takes.

“You don’t need to know anything about autonomous vehicles to be passionate,” she said.

She’s used TikTok to carve out her place as an influencer during the early days of commercially available autonomous vehicles.

“I mostly want people to see they can just use it,” she said about the Waymo service. For more selfish reasons, she hopes her posts push Waymo “to be more widely available.” She has videos of running errands in the minivans, a Waymo van making it out of a crowded Costco parking lot, and a video where she totes her kids around with her. Lovasz and her husband own one car for the family of five. 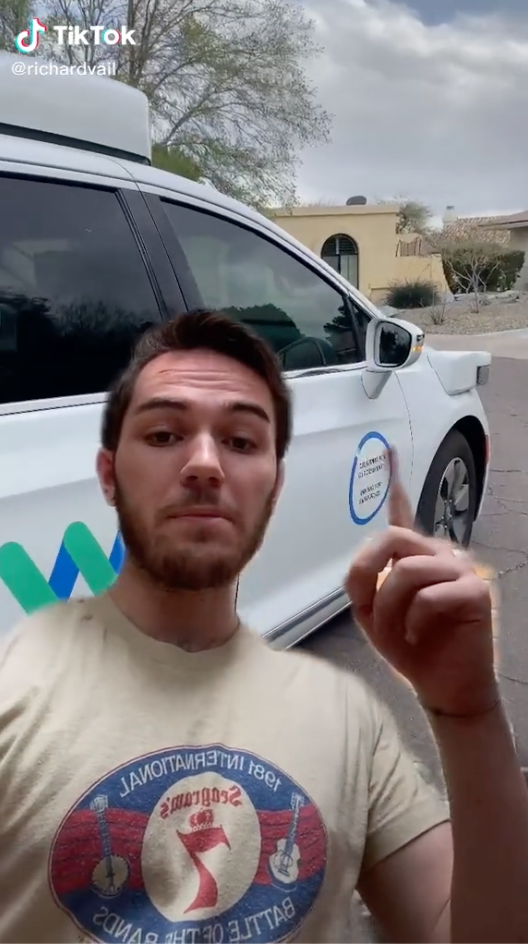 Richard Vail, or @richardvail on TikTok, is another emerging influencer showing his Waymo experiences in Arizona. His simple video of getting into a driverless Waymo van hit 3.6 million views. In response to a commenter’s question about getting pulled over in a Waymo, a follow-up video notched 4.8 million views.

Vail went even further as an early Waymo tester and attempted to see what happens if you get in the way of a moving Waymo. That video got millions of views before Waymo asked Vail if he could refrain from risking his life to test the autonomous system, so he deleted it.

“You don’t need to know anything about autonomous vehicles to be passionate.”

Vail and Lovasz are like new converts, spreading the gospel of self-driving cars, and the companies may stand to benefit from the publicity. Barely anyone knows the names of the biggest (and most well-funded) autonomous vehicle brands. According to a study from data systems company Klas of 1,000 people in the U.S. UK, and Germany from the end of June, only 18 percent had heard of General Motors-backed Cruise and even fewer, at 14 percent, were familiar with Waymo.

But #TeslaTok might be a sort of autonomous driving gateway drug. Tesla, with its big reputation in the electric vehicle space, also has some degree of autonomy built into its products, so it can dip into #autonomous TikTok. The Tesla fans of TikTok reveal behind-the-scenes moments with Tesla’s Autopilot and Full Self-Driving advanced driving assistance systems to a curious audience with limited access to the features.

Brandon Kokes, the 22-year-old behind TikTok’s @modelyflex, is the self-proclaimed “King of Tesla TikTok.” While his coverage of Tesla topics runs the gamut from charging tricks to #TeslaSpill challenges (in which he spills various liquids and substances on his white Tesla seats), his videos as an early tester for Tesla’s not-so-autonomous driving modes draw big views. Tesla’s driving assistance is only Level 2 autonomous, meaning it requires a human driver paying attention and ready to take over, unlike Waymo’s fully driverless rides, and Elon Musk himself has called it “not great.” But in way case, Tesla posts have become Kokes’ income source, largely thanks to his Autopilot-related videos.

In a recent phone call, he said the first Autopilot video he posted just over two years ago blew up with 250,000 views (now it’s at more than 353,000 views). His first Model 3 had the Full Delf-Driving package which at the time included Smart Summon. In a parking lot Kokes could “summon” the car from the Tesla app. He hit a pole using the feature in 2019, as seen in the video below.

Now he’s onto his third Tesla, which he paid for through his content on TikTok, Instagram, and Snapchat. In July he said he posted a joke vid of himself “drinking” Tesla Tequila in the back seat while the car drove itself (in a parking lot, briefly). TikTok flagged the post and labeled it as a dangerous activity. But not before he claims it got 2 million views in six hours. He re-posted the video to a second account, separate from his main one.

He bought the Tesla Model 3 while in college studying economics at Colorado State University and decided he “had to make it work” on social media to pay it off. “I took a risk,” he said. Kokes, who is now a full-time social media influencer, says he has seen others try to make it in the Tesla TikTok world. But few have been as consistent and focused as he’s been, having posted regularly since August of 2019. 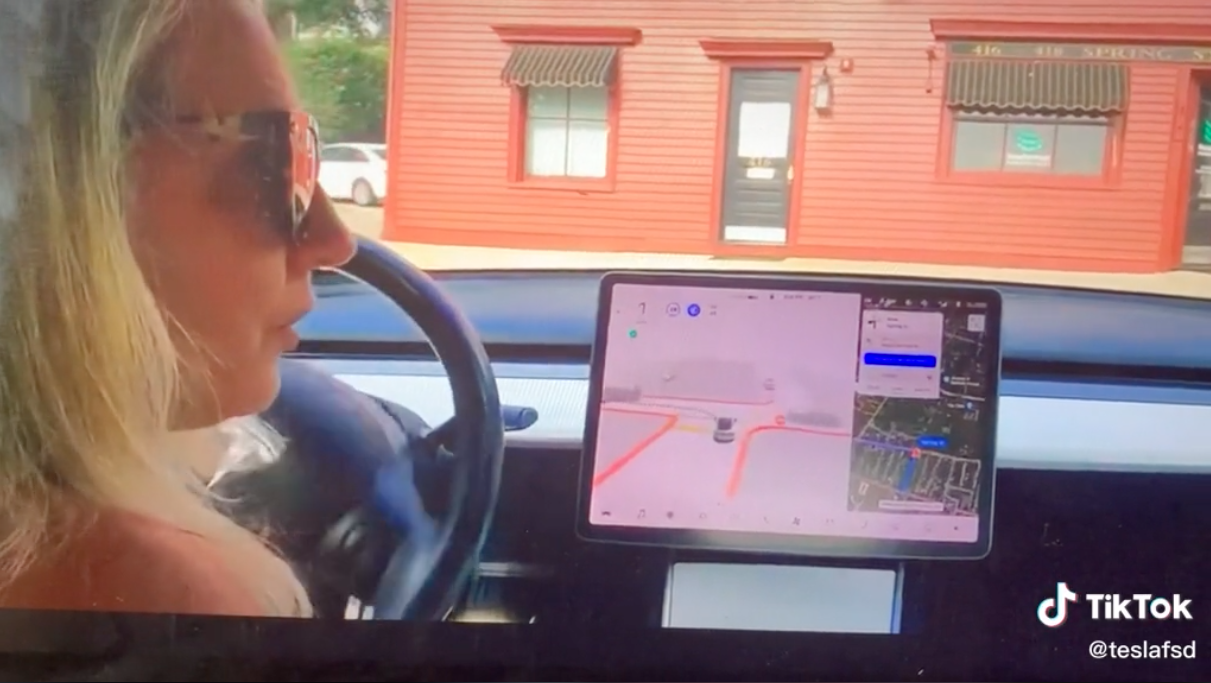 Other Tesla TikTok videos show how the latest version of the Tesla Full Self-Driving beta on city streets works (or doesn’t). While Twitter and YouTube are filled with dash-cam videos of FSD (85,300 YouTube videos come up for “Tesla FSD”), TikTok has only a few main contributors showing the advanced driving assistance beta in action. The hashtag #teslafsd has under 100 TikTok videos.

But it’s still early days — for both Tesla FSD, and for autonomous driving influencers to take over TikTok. With social media creators showing up in droves whenever someone discovers a new way to earn online cachet (and even money), the hashtags #autonomous, #selfdriving, and #driverless may start to fill out.