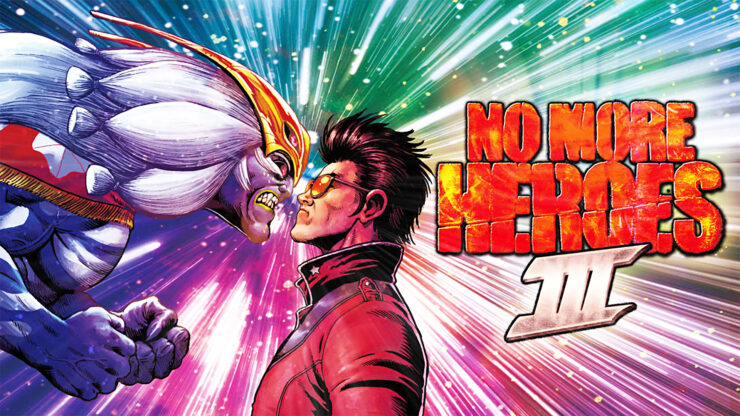 Recapturing the magic of a cult classic, especially one as unique as No More Heroes, is no easy task, but Goichi Suda (aka Suda51) has kept his bizarre epic rolling along with surprising success. No More Heroes 2 was arguably just as good as the original, and while Travis Strikes Again was a bit less ambitious than previous games, it expanded the NMH universe in some interesting ways. Now, Suda51 attempts to keep his kill streak alive with No More Heroes III.

Has Travis Touchdown hung onto his death-slinging swagger? Is the latest lineup of bosses as crazy as ever? And most important of all… how’s that new lawn mowing minigame? Pump up your beam katana, it’s time to see if No More Heroes still has that killer instinct… 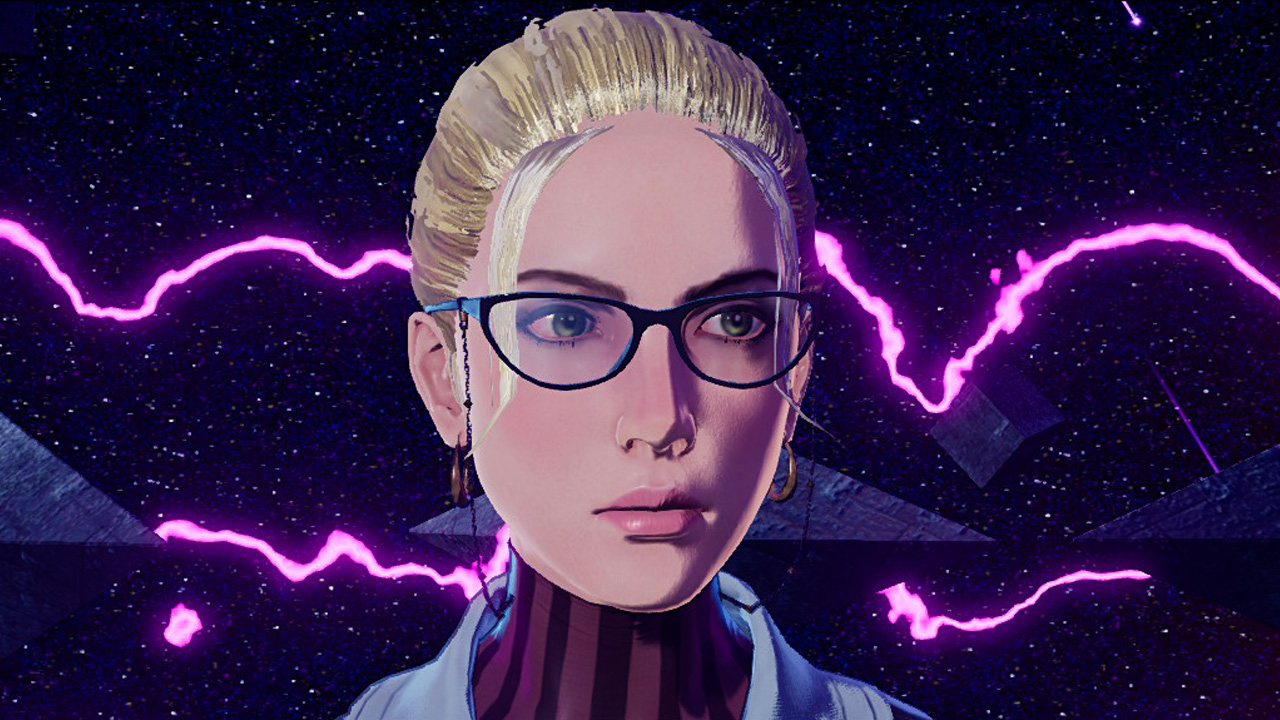 No More Heroes III grabs your attention right from the get-go as we see a young boy, Damon, help a cuddly alien named Fu return to his home planet. Flash forward 20 years and Fu returns to reconnect with Damon… and brutally conquer the planet Earth with a cadre of alien killers. Whoops! Travis Touchdown isn’t down with this of course, but for some reason his now-wife Sylvia and the United Assassins Association (UAA) are working with Fu and Damon, so it’s time to rise through the rankings yet again, this time with the fate of the whole world on the line.

Suda’s latest story smartly balances accessibility with fan service – the basic “E.T. gone wrong” premise is something anybody can understand and enjoy, but he also packs No More Heroes III with references to past games hardcore fans will love. Initially, I was maybe a bit disappointed by the new alien protagonists, as they feel like they have a bit less personality than past NMH bosses, but I think that’s partly by design. Without giving anything away, Suda has plenty of twists and turns up his sleeve, with many old friends and enemies, and some interesting new ones, popping up at regular intervals. Some may disagree with how certain fan-favorite characters are treated, but Suda is pulling no punches here and manages to build his latest grindhouse saga to a satisfying, fist-pumping conclusion. 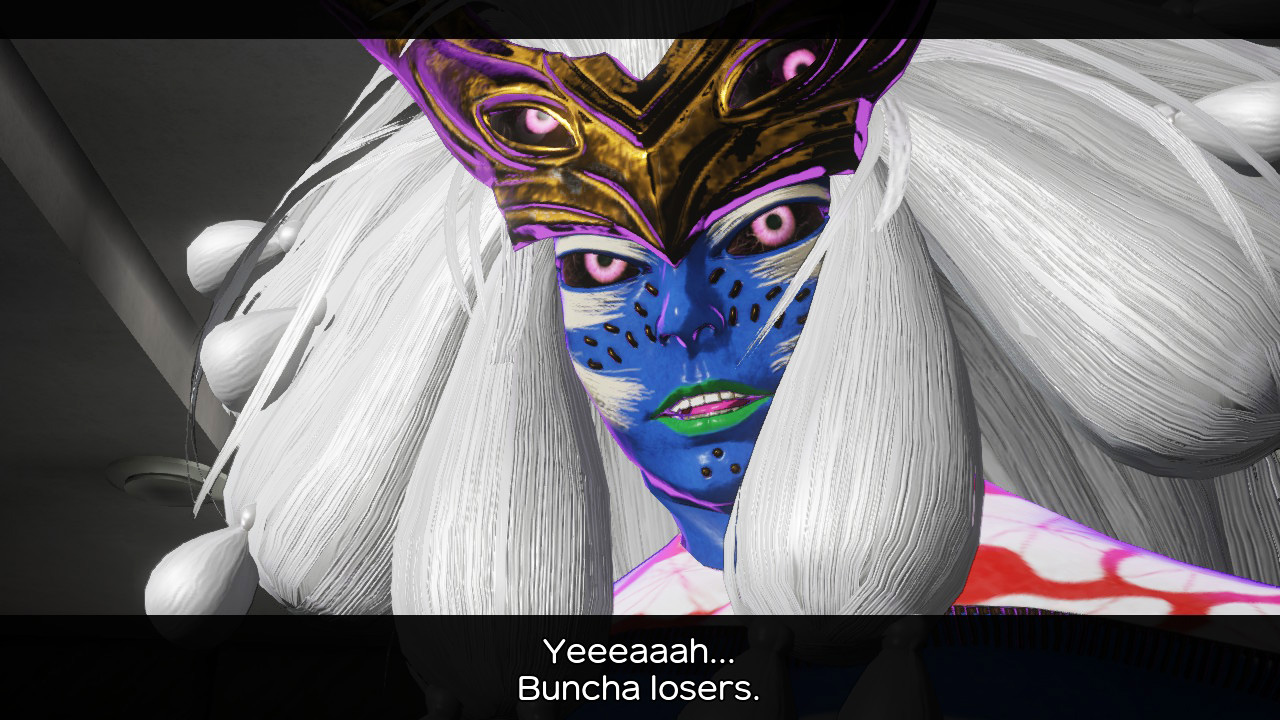 Suda uses everything in his toolbox to tell No More Heroes III’s story, from epic in-game cutscenes to various styles of anime, to retro video game graphics, and while the game isn’t exactly a technical masterpiece, you have to respect its flair. Meanwhile, the game’s grubby punk-rock soundtrack is the perfect accompaniment to the action, and the characters sound as they should, as most of the series’ classic voice cast returns.

In terms of structure, No More Heroes III reverts to the original game’s formula. The open world is back and you once again have to raise an entry fee in order to take on each ranked assassin. The short levels you had to play through before bosses are gone, replaced by a designated series of straightforward qualification battles, but that’s not a big loss. 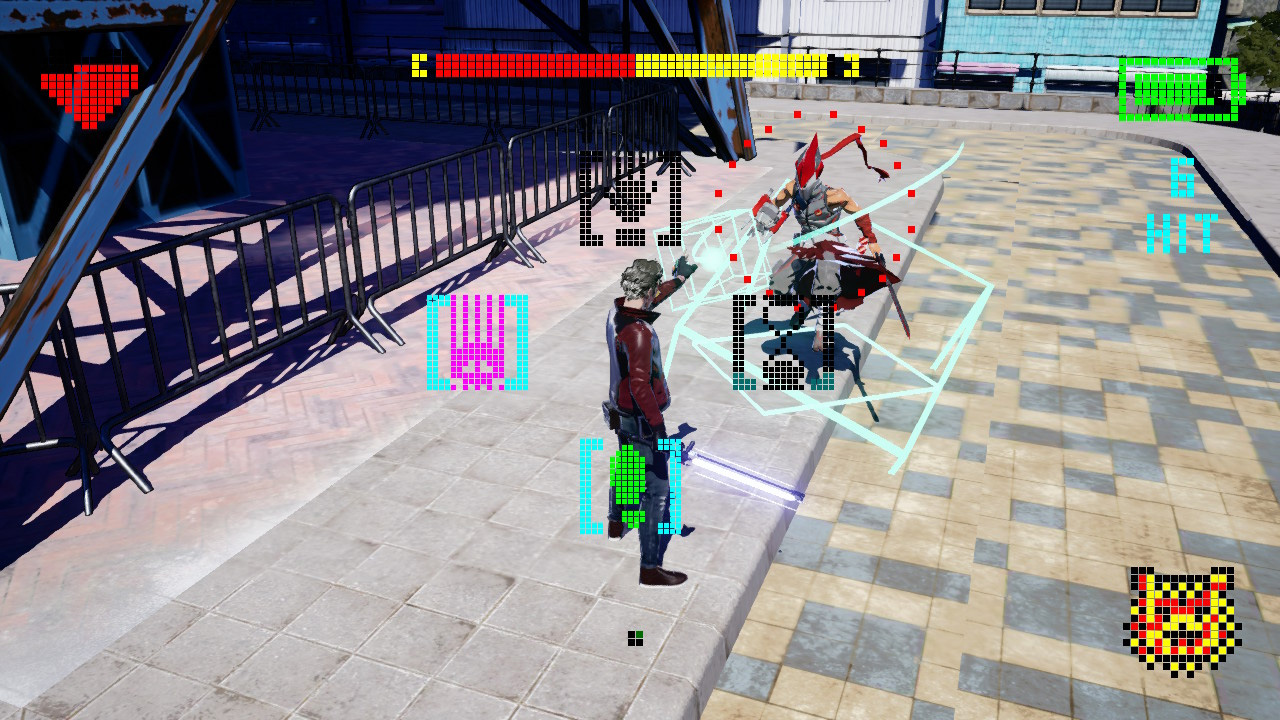 Combat doesn’t deviate too much from past games – Travis can deal out light and heavy attacks, which become more effective as his tension rises by landing blows without taking damage. Inflict enough punishment and you can dole out a Death Blow by pushing the right stick or flicking your Joy-Con in a specific direction, which also brings up a slot machine that will grant you certain bonuses if you’re lucky. As always, keeping your beam katana’s energy pumped up by shaking your Joy-Con (or holding R and jiggling the right stick) is essential, and stunned enemies will let you sneak in with a quick pro wrestling powerbomb or brainbuster. 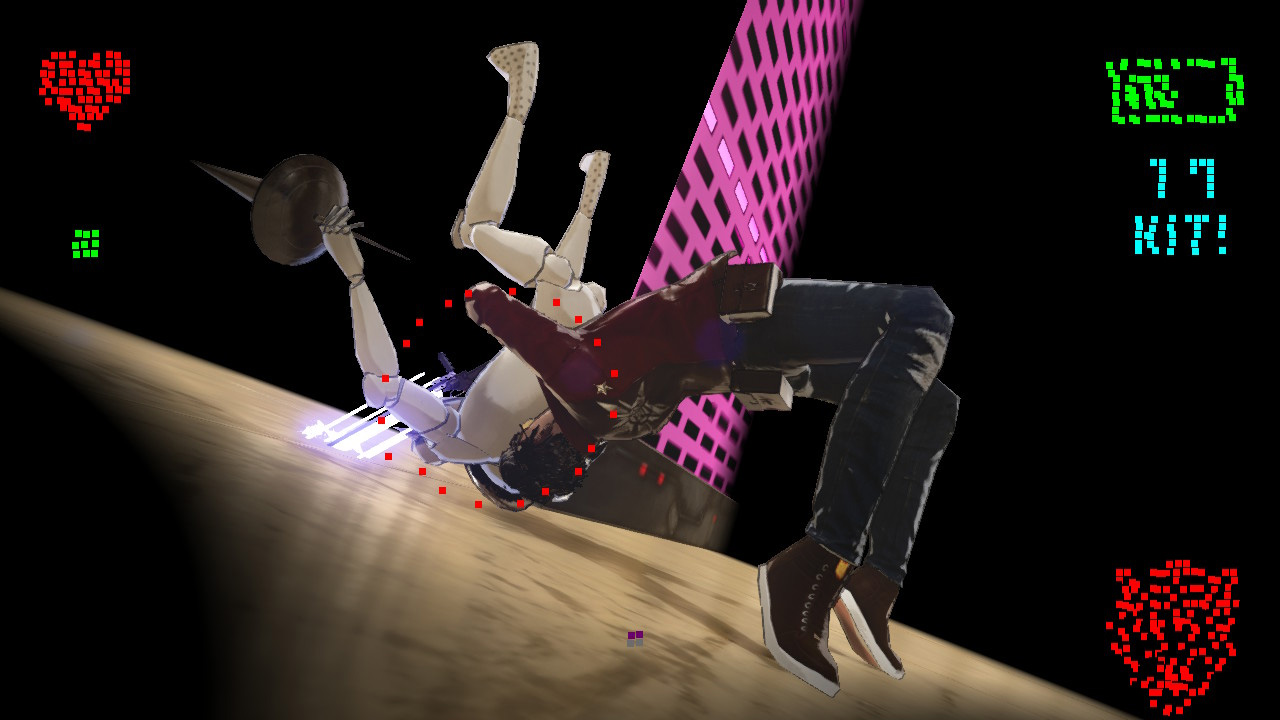 In some respects, combat has been a bit streamlined, with dodging now being a one-button process and elements like Dark Side Mode and No More Heroes 2’s multiple beam katanas being removed. That said, new things have been added, including a variety of Death Glove Skills that allow you to unleash a killer dropkick, force throw enemies, slow down time, or rain down damage from above. There are even a series of mecha suits Travis can activate for some limited-time destruction. Once again, Suda seems to have accessibility in mind – you can focus on the basics and rack up big combos, which will result in higher ratings and rewards for battles, but less skilled players can fall back on the Death Glove Skills if they want.

Perhaps the thing that most sets No More Heroes III’s combat apart is its wide range of enemies. Gone are the garden-variety thugs you sliced and diced in the past, replaced by an array of weird alien baddies with unique attacks and weaknesses, many of which almost feel like minibosses. Overall, NMH3 delivers fast, fluid, approachable action that doesn’t get old even as you log dozens of battles. And don’t worry, the game’s performance delivers when it counts, with only very brief hitches during combat. 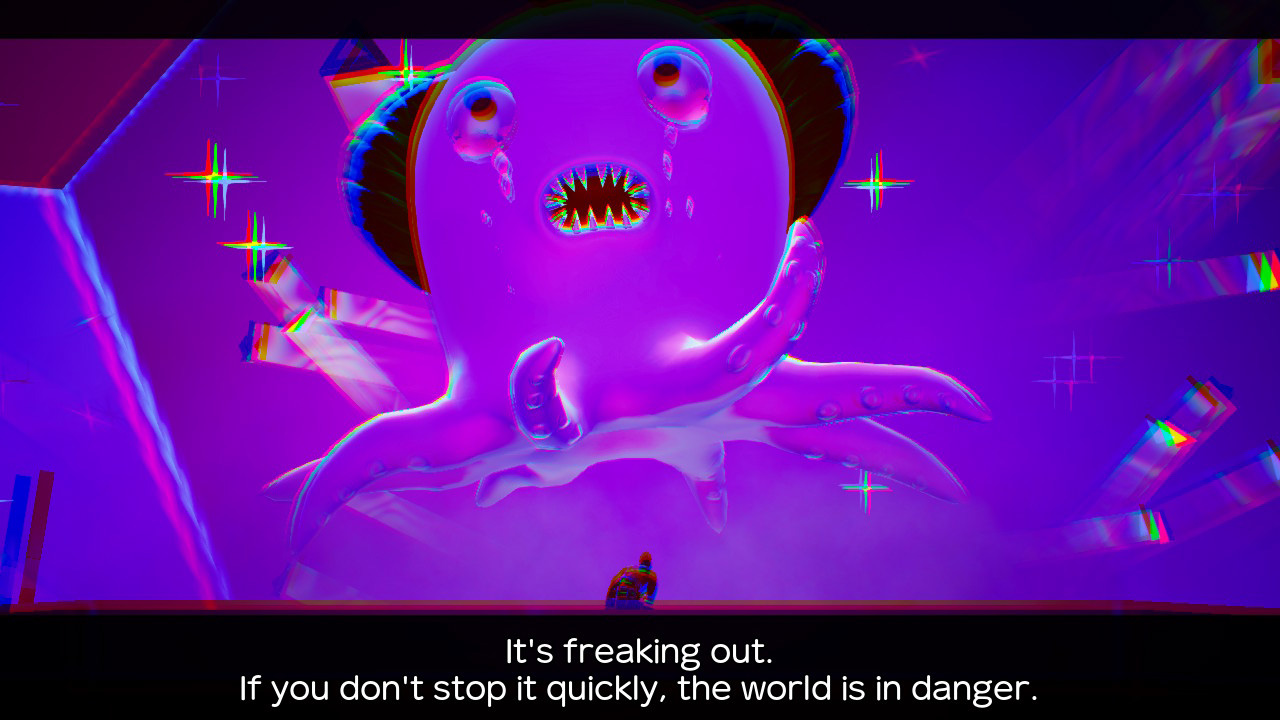 Of course, the real highlight of any good No More Heroes game are the bosses, and Suda goes above and beyond here. NMH3 serves up some more traditional throwdowns, which are plenty of fun, but Suda isn’t content to stick to a single style of boss or genre. Turn-based RPG combat? That happens. Space shooter? Yup. A deadly game of musical chairs? You’d better believe it. I don’t want to spoil any more, but some of the genre hopping will definitely get fans speculating. Best of all, despite their wildly varied approaches, all the boss fights remain playable and fun – not an easy trick to pull off.

So, at this point, it may sound like No More Heroes III really blew me away, and certainly parts of it did, but it’s not all strawberries on this shortcake. No More Heroes’ open world has been divisive right from the get-go, and unfortunately, not a whole lot has changed in the intervening 13 years. The open world design is still very simple, and while we now expand beyond Santa Destroy, most of the new areas are cheats – largely featureless wastelands without much to see or explore. To be fair, the world isn’t quite as janky as it was back in 2008, but the framerate still sputters when you get on your bike (running around on foot is usually fine). 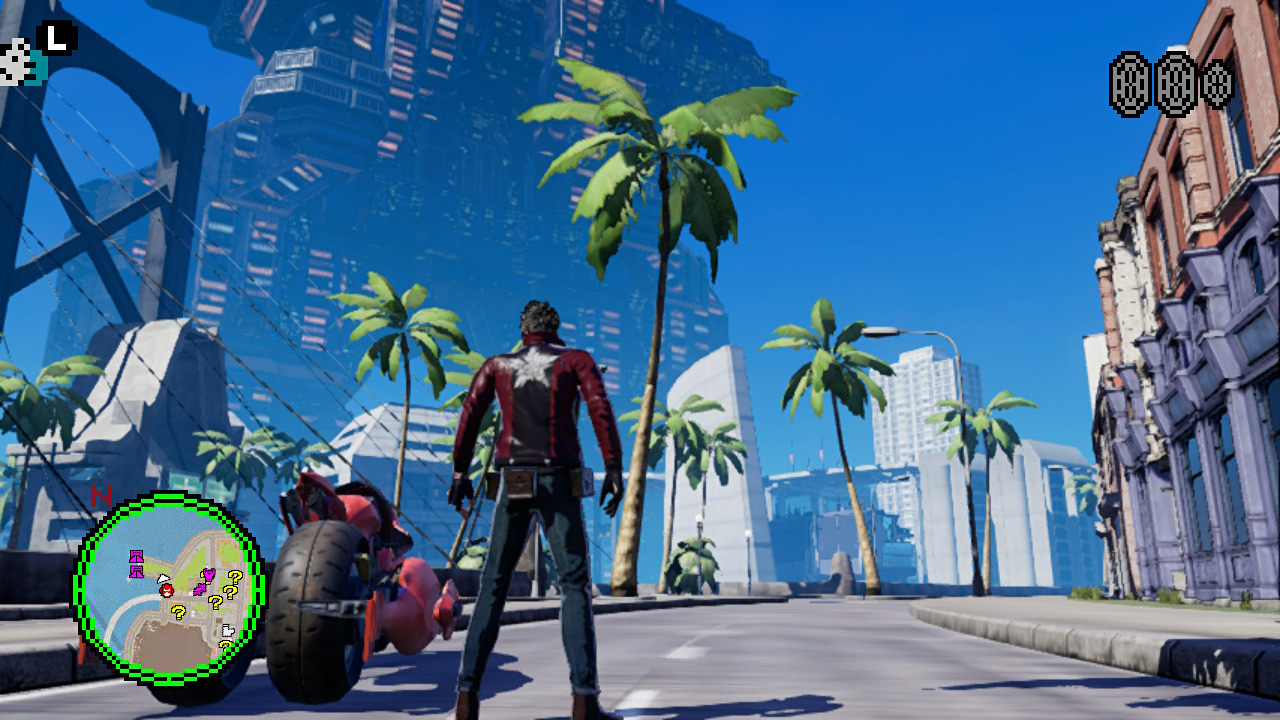 Classic minigames like lawn mowing and garbage picking return, with some new ones that challenge you to do things like blast waves of sharks, plunge toilets, and even traverse mini dungeons have been added. There’s also plenty of busywork, from collecting scorpions to planting trees and collecting t-shirts. It’s all mildly diverting, but I feel like this particular joke has worn out its welcome. Suda goes to such lengths to make the game’s story and boss fights feel fresh and exciting, then just half-heartedly throws out the same old open world. 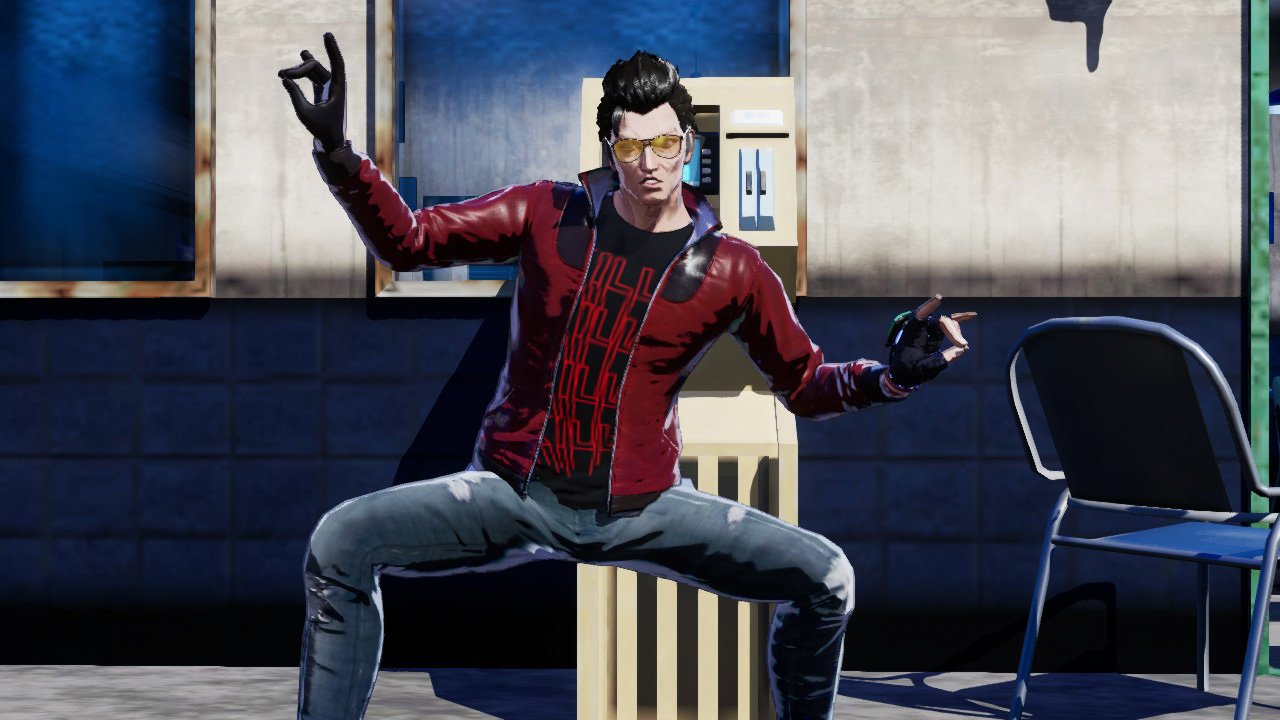 And yet, I can’t be too upset with Suda51 or No More Heroes III. The game’s high points are very high indeed, and the open world stuff isn’t bad, it’s just flat in comparison. Would NMH3 be a better game if it was just 6 to 7 hours of solid-packed craziness? Perhaps, but it’s still a blast at 12 to 15 hours of boss battles and occasional open-world meandering. This is the kind of game where even the credits are wildly entertaining — the good stuff is worth a little bit of grind. Santa Destroy’s sights may be humble, but I guarantee you’ll remember your latest trip there.

This review was based on a copy of No More Heroes III provided by publisher Grasshopper Manufacture.

The post No More Heroes III Review – Garden of Insanity and Inanity by Nathan Birch appeared first on Wccftech.